Sara Ramirez is — and always has been — a queer magnet, even before they came out as bisexual and then non-binary. They are just… electric. I can’t get enough. You can’t get enough. And that’s why we’ve gotten about ten billion tweets and comments from readers who want to know if they need to watch the original Sex and the City to understand/enjoy them in And Just Like That. Honestly? Probably not. But I am surrounded on all sides by completionists, so I understand the impulse. Riese tracks all queer TV in a comprehensive database. Drew tracks every single movie and TV show she watches in an app. One time Valerie Anne spent an entire summer binging — no joke — 171 episodes of The Vampire Diaries just so she wouldn’t miss any references when she started Legacies, which isn’t even a spin-off, but exists in the same universe! But look, Sex and the City was a product of its time and if you haven’t watched it, you don’t need to. I feel you — but I’m here to help. 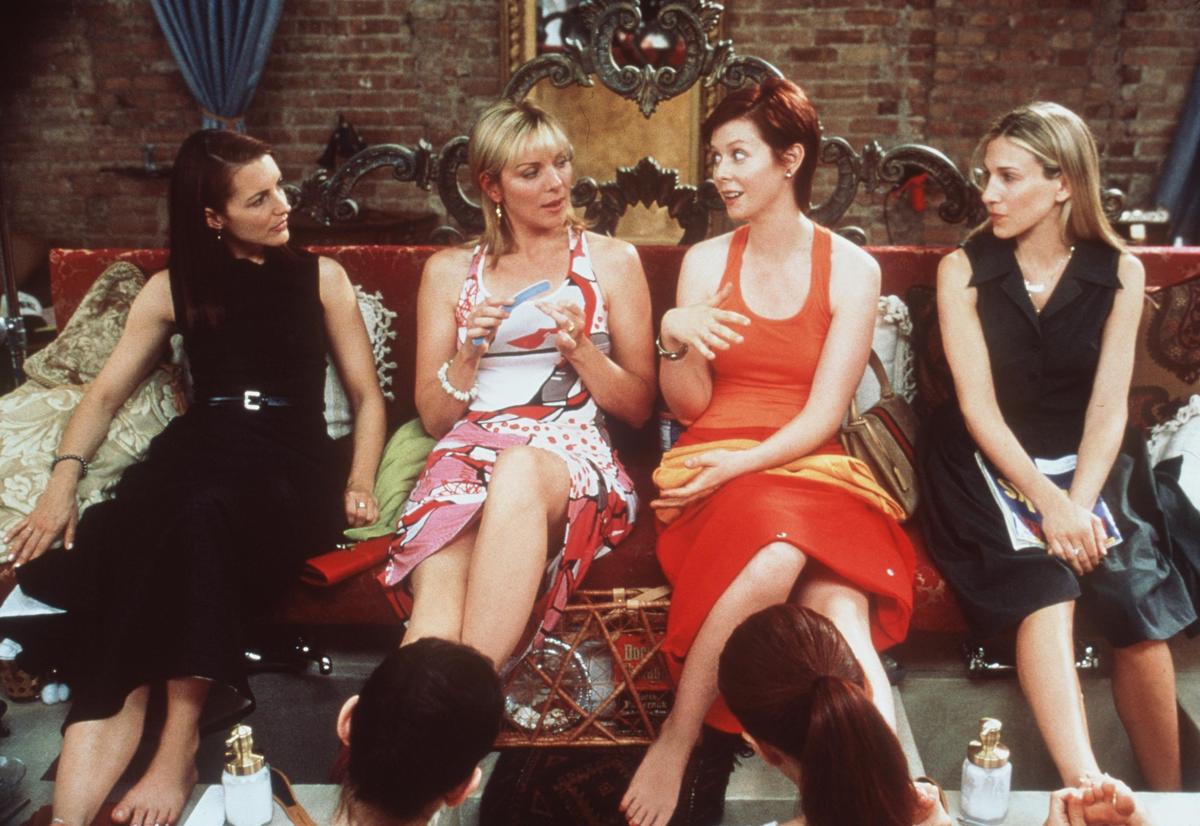 The main character, Carrie Bradshaw (played by Sarah Jessica Parker), was even a sex and dating columnist. In addition to dating and boning, these four women also wore some of the most loony tunes clothes you have ever seen in your entire life. Like shoes and coats that cost as much as a mortgage! They also went to brunch as much as possible, attended many fancy parties at trendy NYC hot spots (enough for the tourism industry to create an entire full weekend bus tour out of them), and made cosmopolitan cocktails very popular. It was Carrie’s signature drink. (A cosmo is a terrible beverage made of cranberry juice, lime, vodka, triple sec, and an orange peel for garnish. You’d be better off drinking a Capri Sun.)

Can you tell me more about these four women?

I can tell you an embarrassing amount about these four women. You know how, before JK Rowling revealed herself as a radicalized transphobic jackass, all queer nerds sorted everyone into Hogwarts houses? Or how most other queers sort everyone by their zodiac signs? Well in the late 90s, the women of Sex and the City were the Hogwarts houses. People even went around saying — out loud — “Oh, I’m such a Miranda” or “Oh, that was such a Samatha thing to do.” 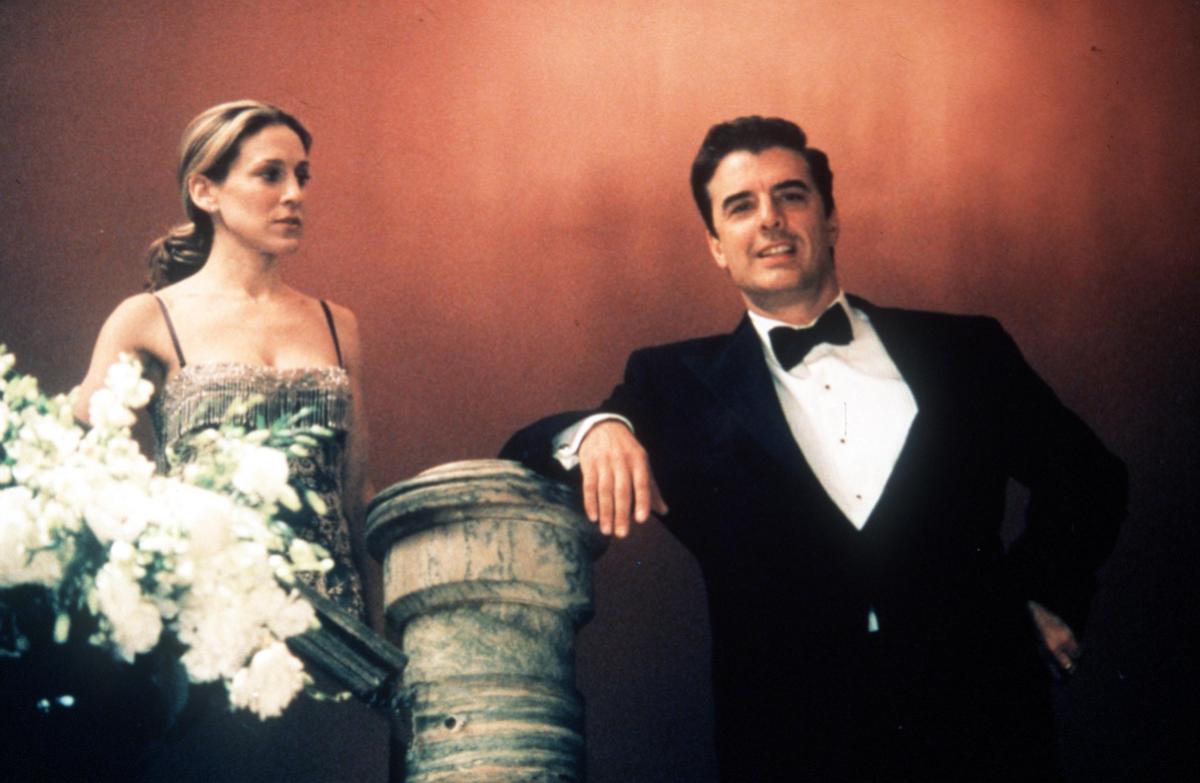 Like I said, Carrie is the main character on the show. She voices over every episode, most of which are themed around whatever column topic she’s covering at the time. In nearly every episode, she says, “I couldn’t help but wonder…” which is kind of her calling card in her writing. In her life, Carrie also thinks she is the main character. Of, like, the world. This would be always unbearable (instead of 67% unbearable) if SJP wasn’t actually a brilliant actress who makes you feel empathy even when her struggles are as trite as a broken shoe heel derailing her entire week. She’s the one that wears the most bonkers of all the bonkers outfits, including a very famous tiered tutu paired with a pale-pink tank top and strappy sandals, which she wore in the show’s opening credits.

Carrie’s main love interest, from the very beginning of the show, is a guy she calls “Big,” as in “big tycoon, big dreamboat, and big time out of my league.” We don’t even learn that his name is John James Preston until like maybe 100 episodes in. He’s played very charmingly by Chris Noth, but he is a prick of epic proportions who just cannot commit to Carrie. They are on again, off again, on again, off again, on, off, on, off, on, off for the whole show. And then they finally get married. Carrie dates a lot of other dillholes, especially Aidan Shaw, the ultimate Nice Guy, before Nice Guys were being called out for being Nice Guys. 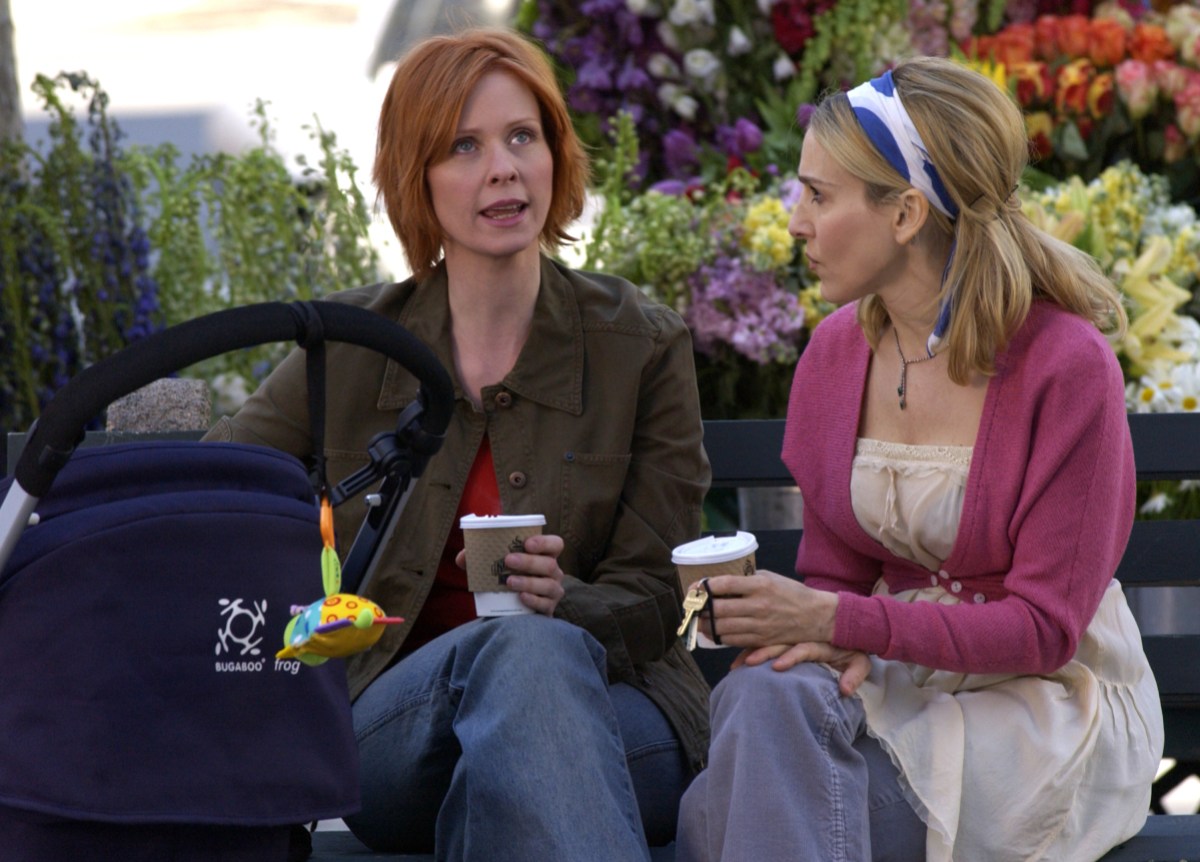 Before Cynthia Nixon ran for governor of New York, before she even realized she was queer and came out (I still don’t actually know what label she uses; she’s been very cagey about it!), she landed the role of high-powered, uptight, cynical lawyer Miranda Hobbes, who actually kind of hates men. Everyone calls her Carrie’s “voice of reason” because she is the only one who’ll tell her best friend she’s dating an endless parade of handsome horror shows. She’s also the only one on the show who really attempts to “have it all.” She has a kid named Brady, she buys her own apartment, she becomes a partner at her law firm, and — at the very end of the show — she finally commits to her longtime boyfriend, Steve, a shy little guy who owns a bar and loves to play basketball and kind of sounds like a cartoon character. In one of her most famous scenes, when she’s trying to lose her baby weight, she throws away some cake, and then eats the cake out of the trash can, and then calls Carrie and says, “I ate some cake out of the trash can.” 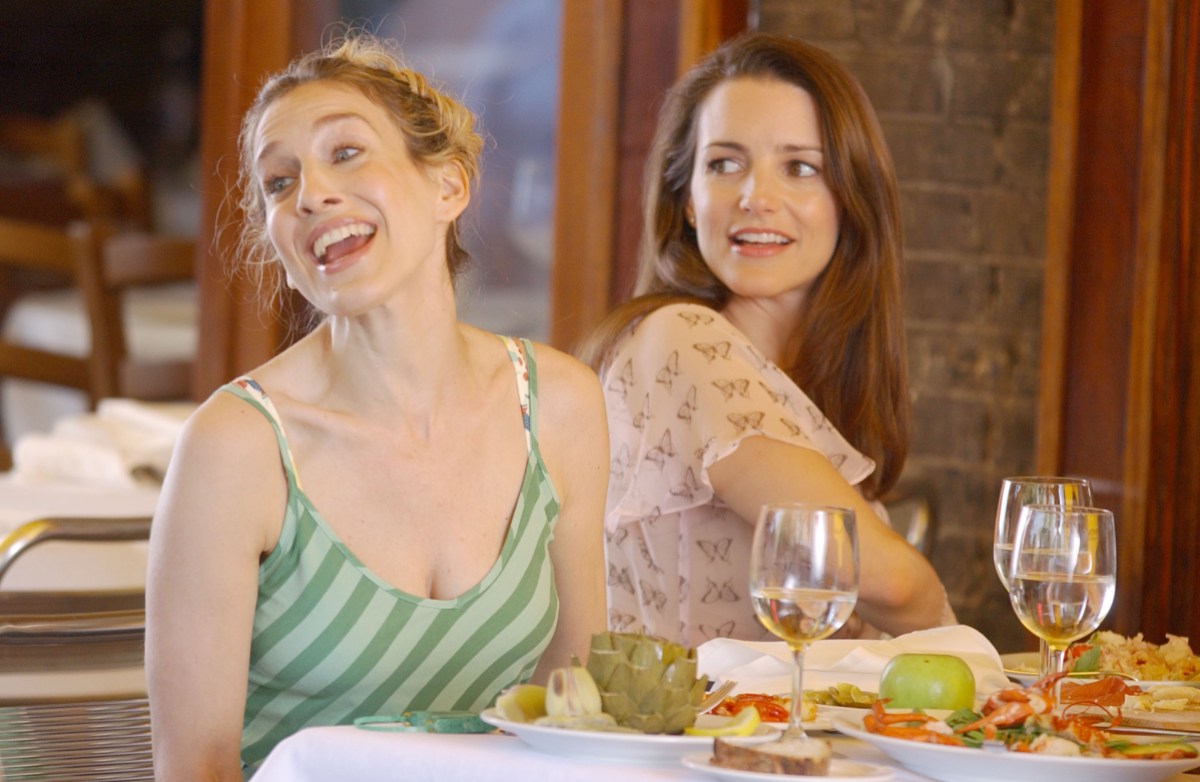 Charlotte’s like… what if Blair Waldorf grew up? Do you know what I mean? She’s the sort of wholesomey girl next door, if your door is next to another six million dollar apartment on Park Avenue. She’s the friend who is most often scandalized by all the sex talk, and the friend who wants to get married most of all. Her family’s from Connecticut, she attended Smith, she majored in “Art,” and dreams of one day owning her own gallery if she can’t do the stay at home mom thing.

She’s the first of the gals in the group to get married and also to get divorced. Her first husband, Trey MacDougal (played hilariously by Kyle MacLachlan), is a cardio surgeon with a super-wealthy mom named Bunny who will not stay out of Charlotte’s business. Charlotte and Trey decide to wait until they get married to have sex, which Charlotte only realizes is because Trey struggles with impotence the day before their wedding. Their marriage is unhappy and so Charlotte divorces him — and falls in love with her divorce lawyer, Harry Goldenblatt. She thinks she’s too good for him ’cause he’s not the handsomest guy on the show and he sweats a lot. But ultimately she for really real falls for him, converts to Judaism, and marries him.

They adopt one daughter, Lily, and Charlotte gives birth to a second daughter, Rose. Rose is the one who’s gonna be gay in the new series, I think. 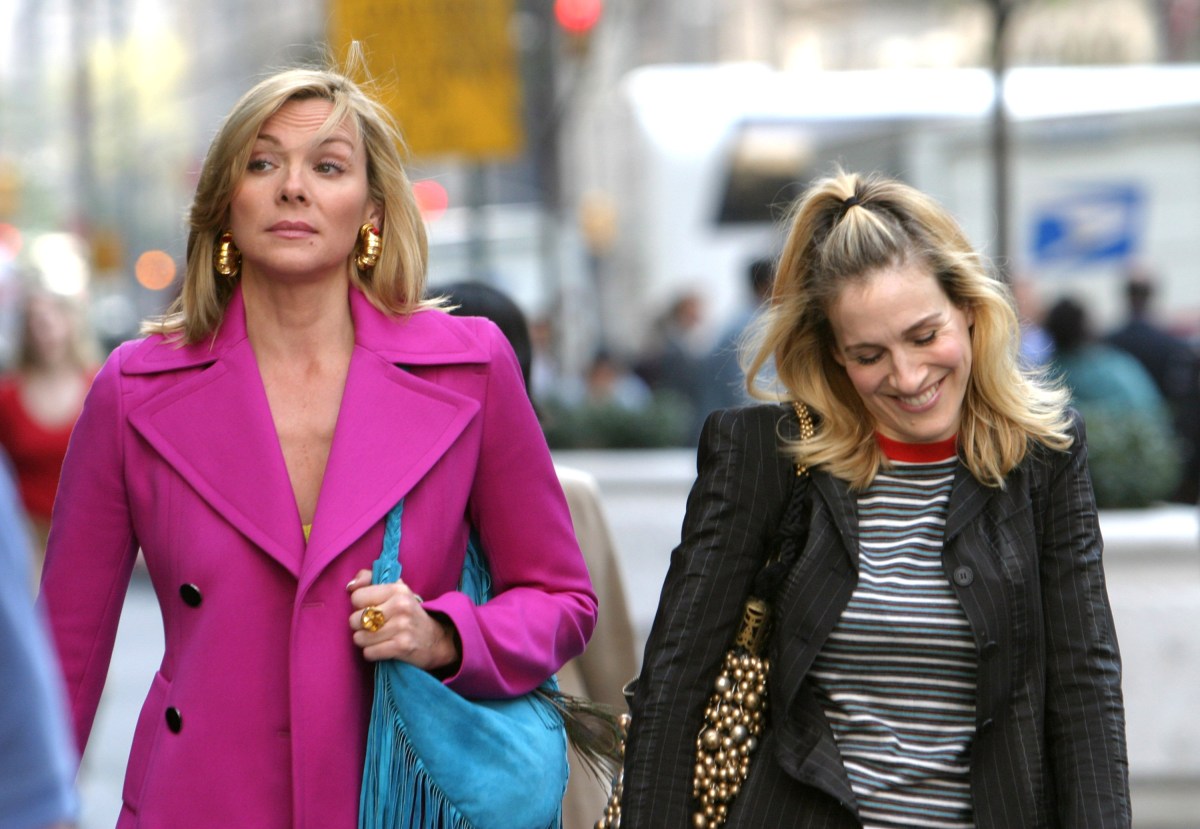 Samatha Jones is everyone’s favorite character on Sex and the City. She’s also the character who loves sex the most, and also getting a rise out of all her friends by talking about it in as much detail as she wants, whenever she wants. She’s got the best one-liners, the best zingers, the best clothes, and is the very best friend in a series that is, at its heart, really all about friendship. She’s a publicist, and she’s very, very good at her job. I don’t really — you know those people who just radiate charm, but also are a little bit scary because they very clearly will not put up with anyone’s bullshit? That’s Samantha. She gets weird when any guy she’s dating tries to be emotional, and that’s the main reason it doesn’t work out when she tries to date a woman. Samatha gets breast cancer in the final season, and survives. Her wigs are amazing during chemo, and they inspired a whole lot of women who were going through breast cancer in real life the early aughts. Samatha’s the only one who doesn’t end the series married.

Kim Cattrall famously fell out with SJP, and even though she returned for the movies, she opted out of the sequel. I miss her a lot. The show is just not the same without her. Carrie was the heart of the original series, but Samantha was its soul. 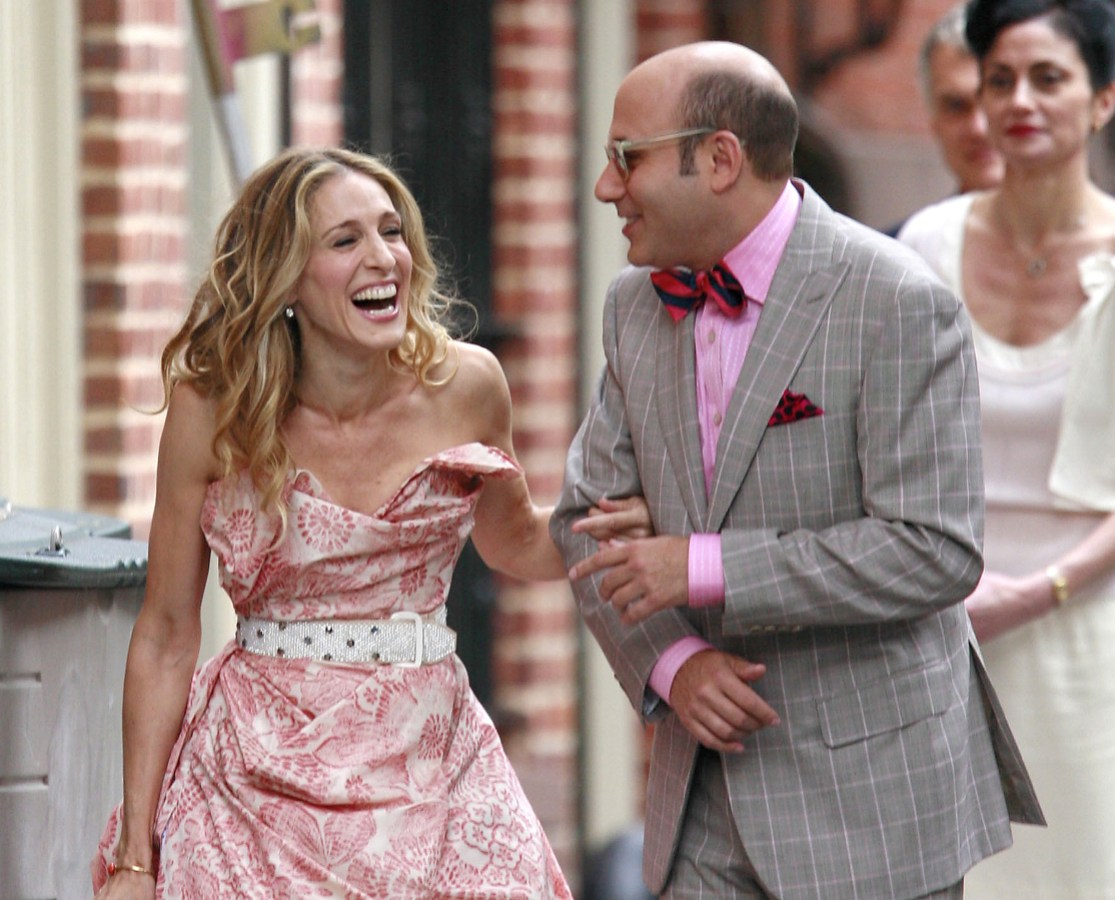 The most valid complaint about Sex and the City during its original run is that it was way too white and way too straight. Like, this is New York City. You’re telling me there’s no women of color in this friend group and no queers? EP Darren Star tried to address that criticism in his very short-lived post-SATC network dramedy, Cashmere Mafia, which starred Lucy Liu and also Bonnie Somerville as bisexual marketing exec Caitlin Dowd, but that series only lasted ten minutes and only me and Riese and Malinda Lo ever watched it.

Samantha had a relationship with an artist named Maria, but it was the Will & Grace era of TV, so instead of simply embracing her bisexuality, everyone on the show started referring to her as a lesbian and then a former lesbian. Charlotte notoriously proclaimed, “She’s not a lesbian! She probably just ran out of men!” Carrie was mostly just surprised that Samatha was in a relationship at all ’cause relationships were not her thing. Maria tried to make Samantha happy, she even bought a strap-on (my first time seeing a strap-on!), but Samantha ended things due to too much processing and feelings.

However, SATC did have gay men. In fact, Stanford Blatch (played by Willie Garson, who passed away during the filming of the sequel) was kind of the original Gay Best Friend. A zillion characters like him sprang up, even on network TV, in the wake of his friendship with Carrie. He was always up for brunch, for gossip, for drama, for Carrie’s unhinged fashion choices. He was happy to follow Carrie shopping for shoes on 5th Ave or carrots at the farmer’s market in Union Square. His main nemesis was another gay character, Anthony Maratino, and they ended up falling in love and getting married in the second movie. (Even though they seem to hate each other again in this new sequel.)

So can I watch the sequel without having watched the original?

Yes, absolutely. You might not feel a strong connection to the main trio, or understand why people like me are constantly crying about Samatha being gone, but you’ll be able to follow the plots and characterizations easy enough. And Sara Ramirez is brand new! And so is Charlotte’s obviously queer teenage daughter, Rose! And so is Miranda’s blossoming queerness! Sex and the City isn’t Game of Thrones or Mad Men or Succession or whatever. There’s no intricate plot details you’ve gotta keep up with. It’s a rom-com that’s kind of become a grief-com, and the deep cut characters that have shown up so far have either been exposited so you know who they are, or mocked because the characters on the show don’t remember them either.

And anyway, it’s not like you need backstory to enjoy Sara Ramirez strutting around in a suit.

Join A+
Related:sex and the city