I expected the 2009 film “Everybody’s Fine” would be, quality-wise, substandard. It got middling reviews upon release and, more importantly, I had no idea it existed until yesterday afternoon when I saw it on a letterboxd list of Christmas movies. As the author of an upcoming post about LGBTQ-inclusive Christmas movies, imagine my surprise when I scanned the cast list to find that Kate Moennig (aka Shane from The L Word) was amongst the film’s listed performers, and further reading suggested she was involved with Drew Barrymore’s character in said film. How was this possible? Kate Moennig was in a Christmas movie in 2009 and nobody told us? My interest in Kate Moennig’s whereabouts in 2009 was still pretty high — not quite as high as it was in 2005, but high. How had I missed what was undoubtedly a hidden gem?

Last time I thought I’d found a “hidden gem,” I found the worst gay movie of all time, but that did not deter me from plowing head-first into “Everybody’s Fine.”

And honestly, I liked it?

Based on the Italian film “Stanno Tutti Bene,” “Everybody’s Fine” stars Robert De Niro as Frank, the father of several children who unforgivably bail for definitely fake reasons on their first family Christmas since Mom died eight months ago. I felt so sad for Frank as he grilled steaks alone in his quiet suburban backyard under the foreboding overlay of Children Cancelling Voicemails that I had to pull my hoodie slightly over my eyes and then hide the rest of my face behind my knees, which’s a defense maneuver I employ whenever there’s something on TV that I cannot bear. (It happened several times during the premiere episode of “And Just Like That,” mostly when Miranda was interacting with her law professor.)

Anyhow! Frank wasn’t close to his kids like his dead wife was but he wants to change that and he’s determined to see all of their shining little faces even if that means he’s gotta go to them. As a surprise! Unfortunately he has a heart condition and his doctor forbids him to board a plane. So he packs up his pills and sets off via railroad and bus, radiating very authentic Dad energy throughout the whole affair. His first stop is New York City to see his artist son, David — but David’s not home, and we quickly learn through phone calls featuring the other three children that Dad’s not the only one wondering what the fuck is going on with this kid. David’s been struggling with addiction and depression and recently got arrested in Mexico?

Frank then hits up his daughter Amy (Kate Beckensale), who is pretending like everything with her marriage and her family is totally okay when it clearly isn’t. However she has a very nice house with a generous lawn and her kid is good at golf. She rushes Dad out after a brief visit so she can head off to Mexico to figure out what’s happening with David. Next is Robert (Sam Rockwell), a percussionist in a traveling orchestra (??) who loves sandwiches and has to convince his Dad that his artistic potential is actually pretty middling. Dad always thought he’d be a conductor!

Finally we arrive at the most important destination on this journey: Las Vegas! This is where Rosie (Drew Barrymore) picks Frank up in a white stretch limo and brings him to a fancy-ass apartment with horrific interior design that obviously isn’t hers. Frank is still photographing the atrocious sofa with his tiny digital camera when there’s a knock at the door and surprise IT’S SHANE! Kate Moennig plays Jilly! She’s Rosie’s pal and she’s got a baby she just needs Rosie to watch for a few hours. ALLEGEDLY. 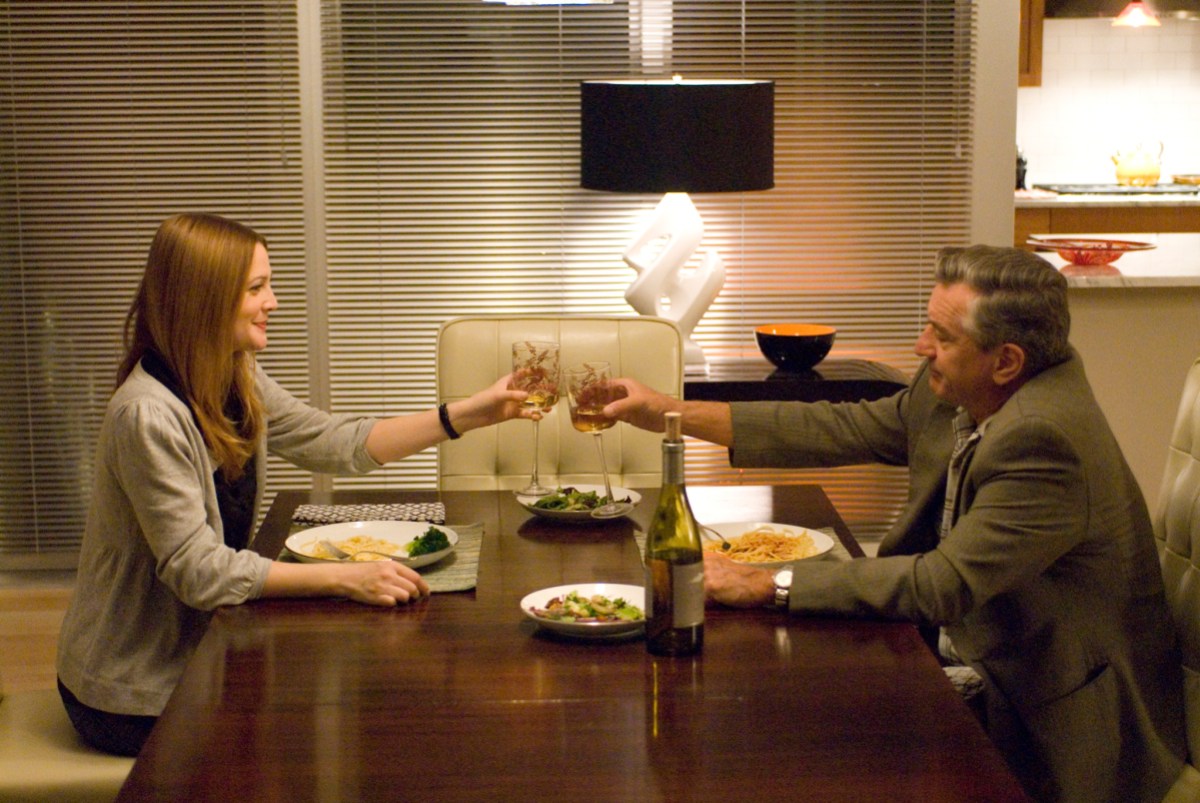 I can’t get into the rest of it without spoilers, but what surprised me most about this film versus my expectations of it was that it’s not really a Christmas movie. There’s simply not a lot of Christmas in it, despite Rotten Tomatoes lamenting it as having the “look and feel of a stereotypical Christmas dramedy.”

Still, Everybody’s Fine’s themes are straight out of the Christmas movie cannon. The pressure to perform a life more perfect than the ones we’re actually living and how we flounder in the spotlight of reunion. The piercing, unending pain of the first holiday season with someone missing, and how sometimes seeing the living just makes death loom that much larger. And of course, the importance of everybody gathering in the same room to please their parents.

Everybody’s Fine balances humor and drama in a familial odyssey anchored by compelling performances — particularly from De Niro and Drew Barrymore, whose Rosie is immediately charming but never cloying, eager to earn her father’s love and approval while clearly grappling with how to do the same for herself. While pretty sad and heavy-handed in parts, Everybody’s Fine usually avoids sentimentality and builds light suspense effectively. It could’ve benefited from spending a bit more time inside the stories of each of the three children. Especially, of course, the gay one!

In conclusion, it turns out that actually somebody did tell me about this movie in 2009 and that person was “me,” because in the summer of 2009 I did in fact type and publish the sentence “Kate Moennig plays Jilly in Everybody’s Fine with Robert DeNiro, Kate Beckinsale, Melissa Leo and Drew Barrymore, coming out in December ’09.” So I guess, my bad on not following up with myself but also, everybody’s fine!

Everybody’s Fine can be rented on Amazon or is streaming free on Pluto with ads.