You’re probably wondering what a gal like me is doing recapping a show like this. I don’t even know how to spell “Manolo Blahnik.”

Well, it all started in middle school when I realized that our yearly sex education classes could be utilized to my lesbian advantage. Generally speaking, it was frowned upon to hate my friend’s boyfriends. As just a small example, I one time tried to run over my best friend’s boyfriend, the quarterback of our football team, with an automobile, and everyone acted like that was just such a reckless and rude thing to do! Even though he called me a cunt and also was STEALING MY BEST FRIEND.

I had already come close to social ostracization in seventh grade, when I told Ann Stanley that 13-year-olds did not know what love is and therefore her boyfriend Preston Hooper did not love her and was only saying that because of blow jobs. (Blow jobs, Ann! Do you want Jesus to catch you with a dick in your mouth?) When we started sex ed, I sensed an ally in our health teacher Mrs. Carpenter, whose husband was a Baptist preacher. “Let’s talk more about chlamydia!” I would suggest. “Can we get some more details on gonorrhea!” And after every vivid description, I would reiterate that the only real way to stay safe from these things was to completely and totally avoid interactions with all boys, and instead focus all of our time and energy on other girls. Mrs. Carpenter agreed. Neither of us knew where to buy some condoms.

The original Sex and the City was my grown-up sex ed. All the straight men on the show — maybe besides Steve, but he ended up marrying a lesbian anyway — were objectively horrible. And it was a fairy tale! So I would watch with my straight friends and constantly be like, “Wow, seems like men are simply disgusting! If only there were some soft, hilarious, smart, driven, successful, compassionate, gentle, athletic, tall and slightly awkward alternative who knows how to cook all your favorite meals, and who your parents and pets already love.”

And that’s how I ended up watching every single episode of SATC and handing over actual money to see the movies in theaters. Even the last one. Which was the worst thing I’ve ever paid for, including a Jar Jar Binks action figure in 1999 and a fish sandwich from some street vendor in London that gave me food poisoning while I was staying in a hostel.

And now I am recapping this sequel which promises gayness on three fronts: 1) Sara Ramirez. 2) Charlotte’s kid. 3) Miranda. 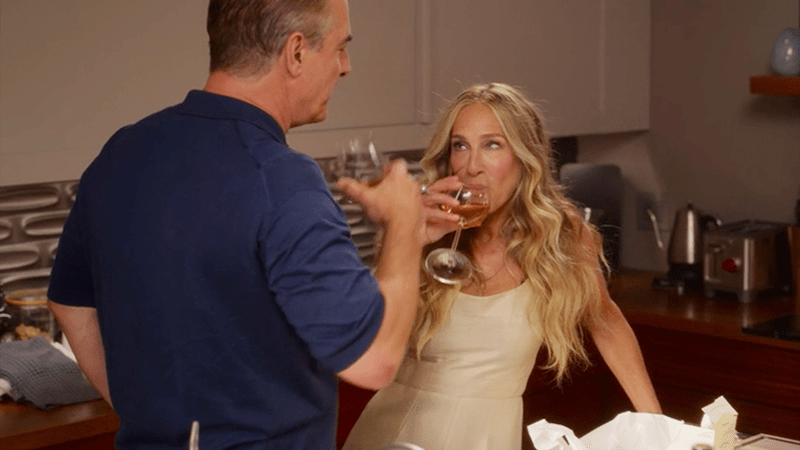 I couldn’t help but wonder: Could being this happy on TV actually be bad?

Big and Carrie are happy, you guys. Incandescently happy. It was a rocky road to get here and he was mostly garbage along the way, but right now, they are just the giddiest middle age straight cis couple you ever did see. They dance and they sing and they goof around in the kitchen while cooking together. They’re adorable and sensual in bed, where they’re still having satisfying and effortless sex after all this time. They’re readying themselves for a trip to the Hamptons, even, and will be right on their way after Carrie attends the piano recital of Lily York-Goldenblatt — Charlotte and Harry’s over-achieving, gender-conforming daughter — at the prestigious MANHATTAN SCHOOL OF MUSIC. (They have another kid, Rose, but she’d rather be skateboarding and also not wearing dresses.) Big doesn’t attend the recital ’cause he’s gotta do his one thousandth Peloton class and also smoke his weekly cigar.

Now, if you are a person who has watched lesbians die on TV in ways ranging from being inexplicably shot through the literal heart standing ten feet away from an open second-story window, or being gunned down on their wedding day, or licking a poisoned envelope, or being turned into sentient space dust, or getting beheaded, or electrocuted by a toaster in the bathtub, or mowed down by a riding lawnmower, or strangled at Jesus Camp by their fake cousin, you can tell what’s about to happen here. Big’s gonna die. Lily’s just playing her precocious little musical genius heart out on that piano at The MANHATTAN SCHOOL OF MUSIC and Big’s heart stops working! Heart attack! Right in the shower! One day, Lily will grow up and quote Julia Stiles’ iconic line from the 2001 masterpiece Save the Last Dance — “She was dying while I was dancing!” — but today it’s just Carrie who finds Big. She’s wearing her wedding shoes and he’s hardly breathing and he dies right there in her arms.

It’s not a huge surprise, to be honest. Helen Fielding killed Darcy in the third Bridget Jones book. Jane the Virgin killed Michael in the middle of the show. Autostraddle Editor in Chief Carmen Phillips has been predicting this since day one. Straight people run out of stories to tell too, and so men gotta die sometimes. At least he wasn’t crunched underneath the tires of a teenage lesbian’s pickup truck in the parking lot of a rural Georgia car wash, you know? And anyway Carrie and Big sort of did bring this upon themselves by being happy, which is the biggest no-no that all queer couples on TV know about. 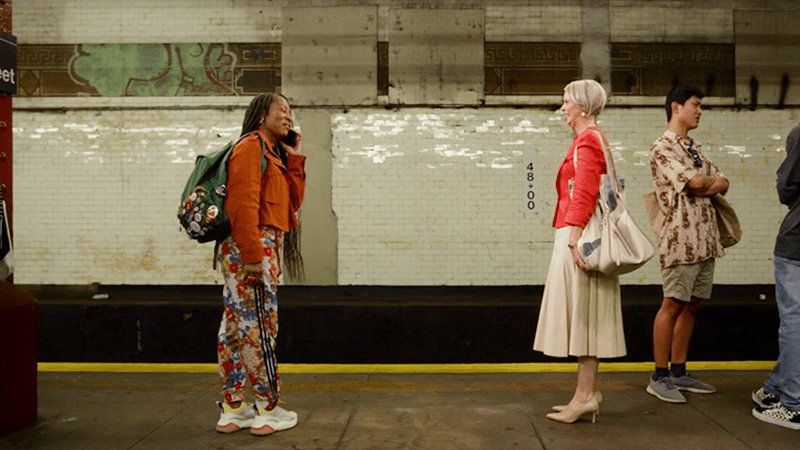 Big’s not the only thing happening in this pilot episode. Miranda’s going back to school to get her master’s in Human Rights and maybe run for governor of New York, who even knows. What me and Carrie both know, however, is that Miranda’s grey hair looks AWESOME. She’s kind of a wreck at school, though, and goes on like a ten-minute diatribe about how much she loves her Black professor, Dr. Nya Wallace, especially her braids. It’s hard to watch. Not as hard as watching the first 30 seasons of this show without a single person of color in the cast, but still. Yikes!

Miranda’s obviously got the hots for Dr. Nya Wallace, whomst she accidentally ends up stalking around the subway for like half the episode. Miranda knows she fucked it up and has some purse wine at Lily’s recital to cope, and also snaps at Charlotte to stop judging her about it. She’s got more going on than being a Park Ave stay at home mom and sometimes that requires purse wine! Relax! 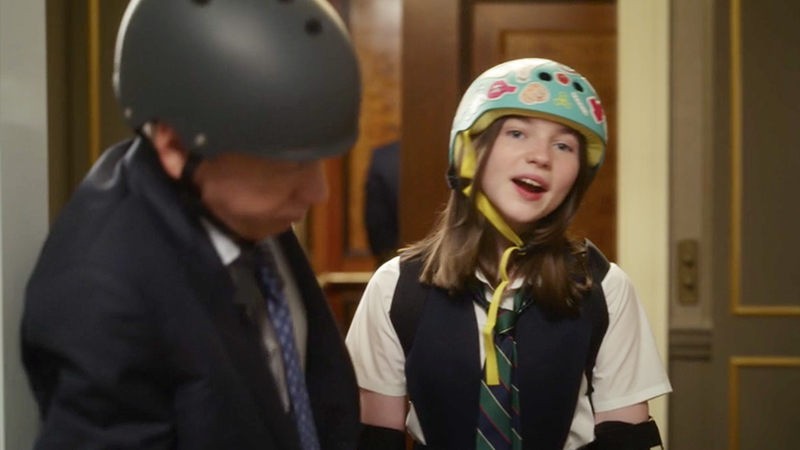 Charlotte, of course, cannot relax. Has, in fact, never relaxed one day in her entire life. Which is going to make her relationship with her obviously very queer and cool and black sheep daughter extremely fraught. She didn’t just buy her a dress to wear to the recital; she bought her an Oscar de la Renta dress! Everyone in florals, okay? (Lily says, “It’s pretty.” Rose says, “Define pretty.”) It’s gonna be a real expensive transitory period for these two. At least when I went through this phase of flipping out every time my mom approached me with girly clothes, the garments in question were from Sears. (I wonder if Lily or Rose has ever even heard of a Sears? Or a mall? Imagine growing up without Cinnabon.) Rose deals with the dress by adding one of those tuxedo t-shirts over it, and also a beanie that looks like Hedwig (the magical owl, not the queer from The Angry Inch — just another thing she doesn’t have in common with her mom). Looks like Charlotte’s also got some mama drama brewing with another parent at The MANHATTAN SCHOOL OF MUSIC, and not just because she, too, approves of purse wine. 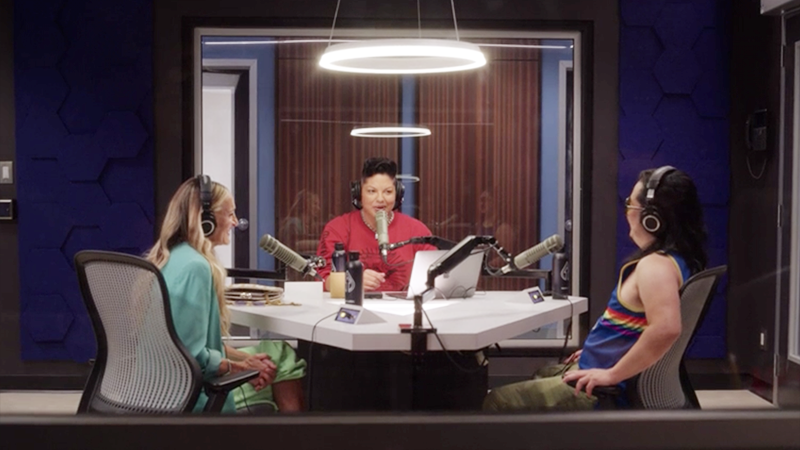 On this episode of Seattle Grace Mercy West Mysteries: Where did Erica Hahn even go?

Okay but what about Carrie’s career? Well, she’s landed a co-hosting gig on a podcast called XY and Me, starring Sara Ramirez as Che Diaz. Che’s the “queer, non-binary, Mexican-Irish diva” voice. Carrie’s the straight, cis, white voice. And get this: Che thinks CARRIE BRADSHAW IS A PRUDE. Well, well, well! How the turntables! XY and Me has the greatest tagline in history: “The podcast that discusses gender roles, sexual roles, and cinnamon roles.” See, Sara Ramirez agrees about Cinnabon! Che calls Carrie and their other co-host, a cis man named Jackie,”the boring genders,” and then smashes a button that yells “WOKE MOMENT!!!” Later in the elevator, Che vapes some weed and tells Carrie to lighten up, get raunchy, and act like the character who had a sex column in the 90s and not some boring married lady.

Carrie is wearing glittery horse riding gloves for their entire conversation, by the way, and an emerald and diamond pendant that’s bigger than the one Kate Winslet lost to the sea in Titanic. What’s boring about that! 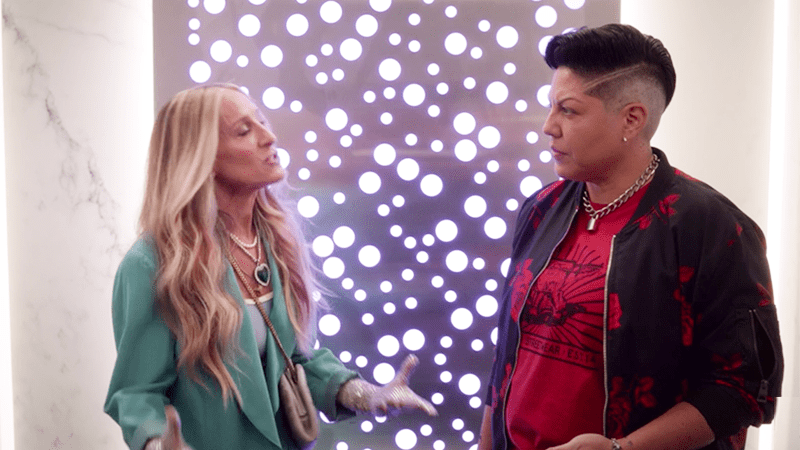 And finally, Samantha is in London because Carrie FIRED HER as her publicist. She moved and stopped returning Carrie’s calls and honestly who can blame her. Her absence is way worse than Big’s will be, in my correct opinion. She’d absolutely take Rose shopping for a suit! And makeout with Sara Ramirez in an elevator the way the goddesses intended!