While holding court at BlogHer last week, Ilene Chaiken once again blessed her flock with promises of eternal life & salvation via The L Word Movie, which she is currently writing. Also, BETTY, the band responsible for that horrid song, is playing the Highline Ballroom in September. Now that we’ve gotten the people we don’t care about out of the way, what’s the rest of the cast up to these days? Autostraddle has the answers. [Sidenote: if you see that we left something out, comment and let us know!] 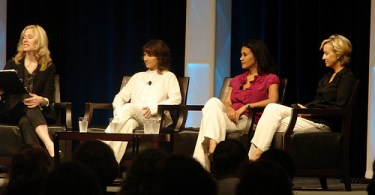 Ilene Chaiken in a Straightjacket of Her Own Doing

The Cast of The L Word: Where Are They Now? 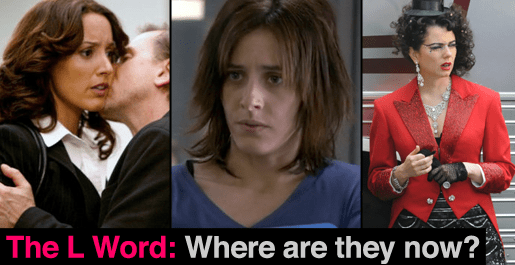 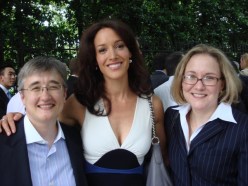 – Photography Book documenting her time on The L Word to be released December 1, according to tibette.com.
– TV: Returning to Lie to Me on FOX in the fall in a recurring role as Lightman’s ex.
– Movie: Jennifer has a small role in The Book of Eli with Denzel Washington to be released Jan 2010.
–Interview: Runner’s World, May 2009 – “I’m a Runner.”
– Out & About: Attended Stonewall anniversary at the White House w/Obama on June 30 (photo). Also at Marlee Matlin’s Hollywood Square dedication ceremony (below). 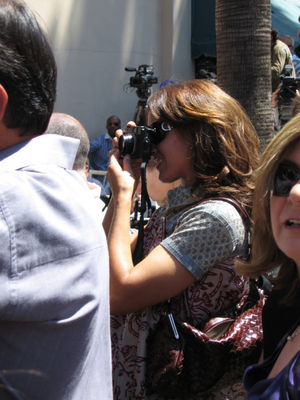 Jennifer Behind the Camera at Marlee Matlin’s Hollywood Stars ceremony 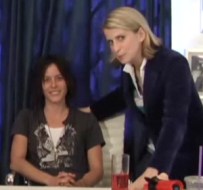 –Movie: Plays “Jilly” in Everybody’s Fine with Robert DeNiro, Kate Beckinsale, Melissa Leo and Drew Barrymore, coming out in December ’09.
– Interview: Appeared on final episode of This Just Out with Liz Feldman; aired July 20, where she met Liz’s Mom who has a gigantoid crush on her.
– Twitter: @katemoennig.
– Television: Leading role in a new show, Three Rivers on CBS in the fall. Kate will play “Miranda Foster,” (more about her character here) a feisty and fearless and slightly damanged doctor at an organ transplant clinic named or her late father, where she will be looking sexy/dramatic and emoting slightly formulaic lines about “the good of the patient” while wearing scrubs, and, it appears, a lot of puffy jackets. Filming for Three Rivers will begin in August in Pittsburgh Los Angeles (according to inside sources, the show is filmed in LA and the Pittsburgh shooting is just for exteriors/B-roll) though exact dates have not yet been set. From what we’ve seen of the new script it would seem that Miranda’s character is slightly less hot-blooded than she was in the original pilot except where the patient is concerned and then she is very passionate.
– ETA 8.1.09: The Pittsburgh Post-Gazette does a set visit and discusses the re-shooting of the pilot, which will star Alfre Woodard rather than Julia Ormond (We love Alfre Woodard and are actually slightly more excited for the show now). Interesting tidbits include: “Odd, clingy scrubs that resembled “Star Trek” uniforms in the Pittsburgh pilot have been discarded in favor of more normal-looking scrubs.”
– Updates per always are at the kate moennig fansite. 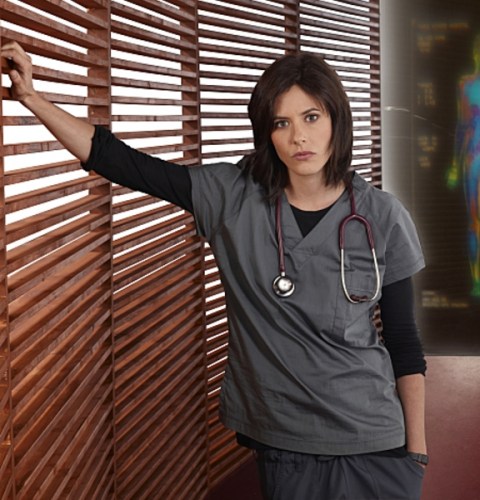 Kate in “Three Rivers,” Shane would hate this haircut 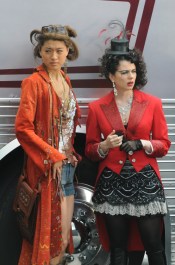 – Television: guest starred on A&E’s The Cleaner on July 14 as “April May,” a “talented, troubled, rebellious and slightly immature singer, who has difficult managing her new status as a hot mess paparazzi bait.” (photo from The Cleaner, right)
– Radio: will become a permanent guest commentator on Air America’s new radio show Hollywood! CLOUT, which combines politics with Hollywood. Hosted by Richard Greene from 9-11pm daily, Mia will appear as the “social and international issues” commentator every Wednesday
– Giving Back: In conjunction with the publication of her book I Live Here, which examines the lives of refugees and displaced people in four corners of the world with all profits benefiting relief efforts, Mia hosted an Operation USA fundraising event in June and continues to work with visibility and relief organizations. 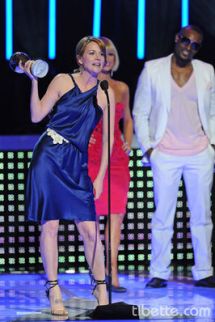 – Out & About: Last public appearance was at the Bravo A-List Awards in April, accepting the award for best sex scene for Bette & Tina.
– Television: She will appear in an episode of Castle airing September 21st for a one-episode spot as “Sandy Allen”:

[SANDY ALLEN] Female, late 30s, she is informed by the police that her husband has been murdered. She lives on the Upper East Side in a middle-class co-op.

– Interview: Told Netscape Celebrity that she is taking some down-time after The L Word to be with her daughter: “My baby is still a year old. I want to be with her all the time, but I’m out there looking for the right thing. We’ll see what happens. I think when you’re on a series for a long time, it might need to die down for a little while. I think it’s easy to get worried about what’s going to come up and then you take the wrong thing so I’m trying to be smart.”
–Online: The new officially endorsed LaurelHolloman.net fansite has launched! You can ask Laurel questions, donate to Doctors Without Borders and look at her beautiful face there whenever you want! 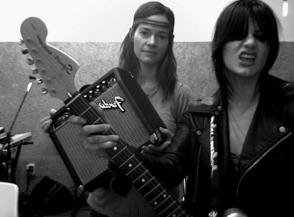 – Television: Appeared in a small role in the Lifetime mini-series, Maneater (Carly recaps here)
– Twitter: Leisha & Cam both use twitter @uhhuhhermusic
– UHH: working on the next Uh Huh Her album right now (yay!) (lots of photos on myspace!)
-playing the Bumbershoot Festival September 5th in Seattle, Washington.
– Latest Leisha updates can always be found at Uh Huh Her fan. 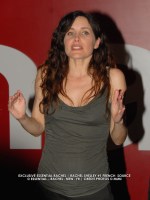 – Life: Also pregnant — if she was 5 months preggers in March, I think that means she must be giving birth right about now?
– Magazines: Writes a monthly column for Diva magazine: in August she wrote about how all the girls from The L Word are pregnant and in July covered the joys of working with women and in May discussed attitudes about sex. Also in May, Rachel Shelley interviewed Alex Hedison in Diva Magazine: Part 1 Part 2 Part 3 Part 4.
– Out and About: Will be appearing at The L Word Down Under convention in January 2010, in Australia! 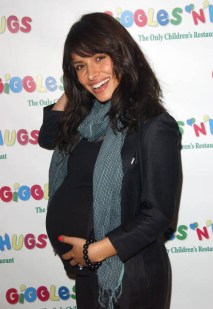 – Movie: Plays “Carla” in Untitled Beatle Boyin Project – in production, with Jeffrey Dean Morgan, release date: 2010
– Television: Her show, Life, on NBC was recently cancelled after 2 seasons
– Life: Married long time boyfriend, Steve Howey, in Vegas recently.
– Life: Is pregnant and due in Summer 2009 (on facebook says she had a baby boy on July 9th – William Wolf Howey, but this hasn’t been confirmed).
– Out & About: Photo from May 27th, 2009 at the Giggles n’ Hugs Mommy & Me event in California.

NEXT: Papi, Dawn Denbo, Jodi Lerner, THE LYNCH and more continue to do no wrong …