Stef listens to a lot of music … in the future! Listen to read to discover what you should be doing with your ears right now, based on what you’ve done with your ears in the past. Speaking of the future, whatever happened to those girls (and James) from that show The L Word?

OUT AT WORK, OUT OF WORK, MAKING OUT AT WORK? We want your stories! We’re looking into what it’s like to be gay in the modern workplace — whatever that means, where-ever you are. First up: Crystal is calling for your stories — reader input, questions or experiences. Got a unique tale about discrimination or sexual harassment? Did you have a secret affair with the hetero lady-boss or an actual not scandalous relationship at work or did you accidentally kiss the intern and are waiting for the other shoe to drop? Are you a cast member of Gimme Sugar who inexplicably finds yourself fighting with your friends – who are also your coworkers — every single day about nothing?  Out of work ’cause you were out at work? Do you work for the gayest company ever? Email crystal@autostraddle.com with your stories & experiences. You can remain anonymous in the article, obvs.

EVERYONE ELSE IS DOING IT: Albania takes steps to legalize gay marriage:“It is an unexpected move in a country that is still one of the most conservative in Europe and where homosexuality was illegal until 1995.” (@BBC news)

BLOG: Also, over at Riese’s blog Autowin, rising star Haviland Stillwell answered a bunch of your questions and Riese is still answering all your questions. It’s like an eternal interview. Check it. (@tgcaw)

MORMONS: Oh my f*cking G-d, we can’t believe this is real, and we didn’t know about it before (it’s a June story): Chicago Security Company turning missionaries into door-to-door salesmen by employing — “former Mormon Missionaries from Utah who cut their teeth — and learned their people-skill chops — cold-calling for their faith.” (@nytimes)

BROMANCING THE STONE: “IT’S TOTALLY NOT GAY AT ALL YOU GUYS. SERIOUSLY. REMEMBER THAT MEN WHO HAVE FRIENDS ARE NOT GAY. You know, because guys can’t have close relationships that don’t involve sex unless they can call it something that indicates its so-not-gay-ness.” (@bitch)

A SHOT AT LOVE WITH SOMEONE SOME FAMOUS PEOPLE HAVE ALSO HAD A SHOT WITH: This country is going to hell in a handbasket! Her? REALLY? Courtney Semel, that girl who dated Tila Tequila & allegedly Lindsay Lohan (probs she just didn’t know enough lezzies yet, like dating the only out girl in Hollywood Socialite High) is getting her own reality show. (@queerty)

RIGHT?S: A bill that would grant spousal health benefits to domestic partners of federal employees cleared a House subcommittee today by a five to three vote.

UGLY/PRETTY BETTY: They’re bringing in focus groups to decide if they like Betty better when she’s ugly. One of the evaluation areas is “eyebrows.”- Ugly Betty’ exclusive: Betty’s glam new look under review at ABC: (@ew.com)

GAY RIGHTS: Gay activists: Marriage secondary to basic rights– “Gay marriage and gays in the military may dominate the headlines, but activists in many states say their fight is much more fundamental: basic rights and protections against discrimination in employment, housing and public accommodation, even to overturn a ban on changing gender on a driver’s license or birth certificate.” (@washingtonpost) [Gay battle tactics, What are they? Maybe they should read the Autostraddle roundtable.]

MEGHAN SPINS ME RIGHT ROUND: Meghan McCain writes an open letter to New York republicans– “Equality under the law and personal freedoms are what make America the greatest country in the world, and they are core values that I hold as a Republican.” (@nydailynews)

AUTOWINNERS: Harvey Milk, Billy Jean King awarded the presidential medal– The medal is given to those who “share one overarching trait: each has been an agent of change. Each saw an imperfect world and set about improving it, often overcoming great obstacles along the way. Their relentless devotion to breaking down barriers and lifting up their fellow citizens sets a standard to which we all should strive.” (doesn’t it strike you sometimes that the way Obama speaks is literally the opposite of how our last president spoke?)

TEEN: Gender Bender prom! – Jeremy, clearly the coolest kid in school, went to his high school prom in a gown and makeup instead of a tuxedo and was denied entrance. I hope you danced all night on the street, you Dancing Queen. (@theexaminers)

MONEY HONEY: An art finance company that lent celebrity photographer (lez!) Annie Leibovitz $24 million against the value of her entire collection and her properties is suing her. (@yahoo news)

COMEDIAN: Kate Clinton is hanging out in Provincetown, going to “fundraising benefit parties,workshops with Children of Lesbians and Gays Everywhere, (COLAGE), Garndening.” (@thebliercoprojcet) 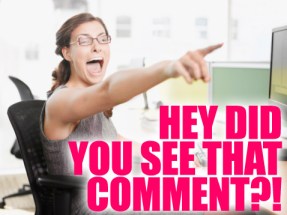 Kate – On “In the Sydney Roller Derby, Even ‘Girly Girls’ Hit Hard“: Are quadriceps “guns”? If I were a roller derby girl, I would be called Guns McGee. That would strike fear into the hearts of many. Also? I would call my sleeves “holsters”.

Kate’s follow-up comment: “Oh, quadriceps are in your legs… so, I’d have to tell people that I put my holsters on, one leg at a time.

from Intern X:
Do you need to smile today? Here watch this slow lorris get his belly rubbed. In other news now I want a pet slow lorris.
+
+

from Riese: Cool Philanthropy: The Yellow Bird Project is “a non-profit Montreal based organization dedicated to bringing our customers the finest of quality, originality, and philanthropy.” They get cool indie musicians to design t-shirts. For example, STARS is included.
+