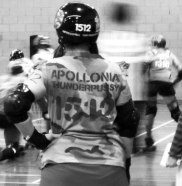 Roller Derby is part athletics, part theatrics, part sex appeal, part show. It’s part sport and part subculture. And after rolling into relative obscurity in the late 80’s, Roller Derby is making a major comeback right now — momentum that is certain to break into a sprint and onto every girl’s lips with the upcoming release of Drew Barrymore’s Whip it!, an homage to the sport starring grrl favorites Ellen Page, Juliette Lewis, Kristen Wiig, Alia Shawkat and Eve.

Personally, I first discovered the roller derby in 2005 as a 20-year old band manager on my first trip to Austin, Texas for South by Southwest. I was out drinking with my band at a rough ‘n tumble dive bar, the Jackalope, when in rolled (literally!) the fiercest girls I’d ever seen. 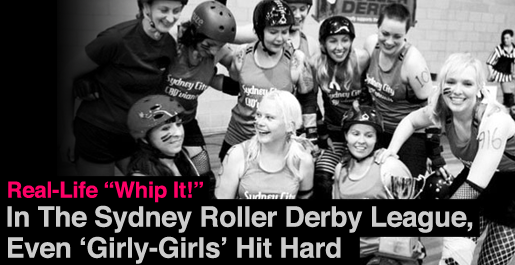 They were the Texas Rollergirls, a heavily tattooed-and-pierced group of gals decked out in spandex and leather costumes so hardcore they made my band of gothic lesbian misfits look like the Dixie Chicks in comparison.

As lifetime appreciators of very tough women, we were a captive audience to the Texas Rollergirls when they rolled over to our booth to evangelize and invite us to their Rock ‘n Rollerderby. As foreigners, however, we had trouble understanding the concept.

Us: So it’s like tag on roller skates, and you win by pushing each other over?
Them: No.

If you’re unfamiliar like I was, here’s what you need to know:

2. Points are scored when one player, the “jammer”, is able to weave through the pack of skaters, overtaking them.

3. It’s the job of the pack to make sure that this doesn’t happen, via clever skating and “blocking” with strategically placed shoulders and hips.

Unfortunately the night of the Rock ‘n Rollerderby I somehow ended up in an Austin hospital with SARS or something.  A void has existed within me ever since … a hole in my soul begging me to take myself to the Rollerderby. 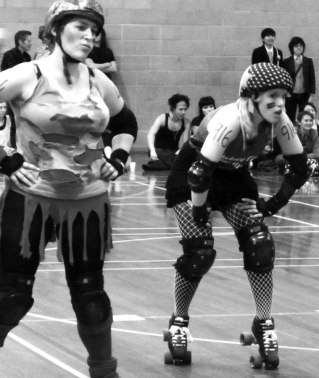 While the USA has been appreciating roller derby since the early 1900s, the emergence of the sport in Sydney in 2007 is thanks to the Sydney Roller Derby League, a not-for-profit club run by volunteers and players from its two teams, the Screamin’ Assault Sirens and the Sydney City CBD’Viants.

“Sydney is only beginning to ‘get’ what derby is all about,” says ‘Two Ton’ Teyla, a “jammer” and crowd favourite from the Screamin’ Assault Sirens. US-born Teyla signed up to the League after moving to Sydney in 2007 and has loved every minute. “Derby takes hold of your life, it changes you.”

And so when I went to see the Sirens and D’viants battle it out in the season final last week, I was ready to become a changed woman.

The size of the crowd at the stadium was impressive. I’d expected to see a sea of alternative lifestyle haircuts and they absolutely delivered on that stereotype. But I was surprised by the diversity of the rest of the crowd — from teens & twentysomethings in the track side “suicide seating” to the parents & grandparents taking shelter on the balcony. The vibe was electric.

“Once we get people through the door, they’re hooked!” says Sirens’ player Apollonia Thunderpussy [real name: Erin].  “I have a feeling that it won’t be long before we see Trippy Longstockings with her own line of panties, or Two Ton Teyla tutus for sale.”

But whether or not the girls chose to glam up, they all had one thing in common: the ability to be intimidating while remaining aesthetically pleasing. I like that in a (group of) women.

[Strange fact: Apollonia also fell in love with the roller derby at SXSW in 2005. Don’t underestimate the Texas Rollergirls’ powers of seduction.]

These ‘skate names’ are all about attitude and innuendo. There was Captain Ratz and Lu Lu le Brawl, Miss Biff and Mad Snatch.

I was directed to the media table, where I waived all rights to safety and was put on alert that the girls could fly off the track at any given moment. The media pit is right next to the track, which is a marked-off area of the basketball court. As the pit sits between the changing rooms and the team benches, I was right in the middle of the action. I’m not easily scared but I won’t lie – as the teams flew out of the dressing rooms and onto the track at the start of the bout, I hugged the wall. Because from the second the whistle blew, it was shock and awe. 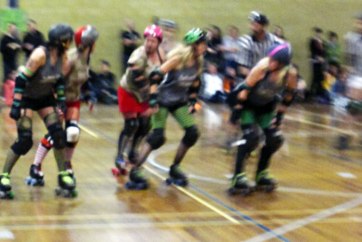 The Sirens rolled onto the track wearing medical face masks, a homage to their Captain who was missing the game because she was quarantined with swine flu. (Seriously!) As you’d expect, there were tattoos and piercings, spandex and fishnets, warpaint and mini-skirts. But for every girl who took her uniform to the extreme, there was one who just wore it as is. The teams wore their battle colours. The Sirens were decked out in army fatigue camo tops and bright red shorts and skirts, while the D’Viants opted for grey singlets with black shorts and shirts, some with neon green trimmings.

My personal favourite, the D’Viants’ Fairuza Hulk, was comparatively understated, as were many of her team mates. But whether or not the girls chose to glam up, they all had one thing in common: the ability to be intimidating while remaining aesthetically pleasing. I like that in a (group of) women.

Apollonia put it this way: “It may be a contact sport, but there’s still a lot of femininity… Just because we hit hard doesn’t mean we still can’t be girlie girls!”

The match I witnessed was the season final, packed with theatrics and show[o]manship from the rollerblading stuntmen & Missy the Pole Dancer at half-time to the blaring indie music and — the attitude!

But underneath all that is the reality that this is a very serious sport requiring incredible athleticism, which you can’t ignore while watching the girls hurtle around the track dodging human obstacles like the professional skaters that they really truly have to be. But there are always misconceptions —

“[Some people think] that we’re just out there to bash each other, that there are no rules,” says Two Ton. “They think that we all wear fishnets, have tattoos and piercings (some of us do, I do), and that we’re all gay (some of us are, I am). Once people see the game, they see how fast and hard we skate, they realise this is a serious sport. You just get to wear a tutu if you want to.”

D’Viants player Surly Valentine [real name: Lara] shared a similar sentiment. “The major misconception about modern day roller derby is that it’s staged, like rock and roll wrestling… Sure, we love to dress up but the hits are definitely real. We train very hard to get to the level we play at – it’s definitely a legitimate sport, as much as football is.” 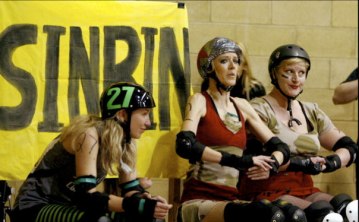 They race, they yell, they hit, they slam, they spill…  and yeah, do they spill! – sometimes they spill so hard that I have to shield my eyes.

These girls don’t mess around, they block hard and it’s not always without penalty. The Sin Bin [penalty box] is occupied for most of the game, predominately by players from the Sirens [*cough* Two Ton].

While there’s no doubt that this is a dangerous sport, Apollonia assures me that they’re trained to handle their hits. “Contrary to popular belief, there is a lot of strategy, training and timing that goes into the hits you see on the track; we’re not just whacking each other for ‘best bruise’ prize at the end of the year, or the cover of the Roller Girl calendar.”

And the best strategy for avoiding injury? “I enjoy dodging hits. I do my best to skate faster than the girls trying to knock me out,” says Two Ton.

Despite the violence and heavy competition on the track, I witnessed an obvious camaraderie that transcends team colours. The same girls who are slamming each other to the floor are hugging and high-fiving each other in the half time break. “Sometimes tensions can remain once the game is over, but we really try hard to keep it on the track,” Two Ton says. “We all work hard for the same league… though I know I have my own nemesis, she still gives me a ride home from training!” 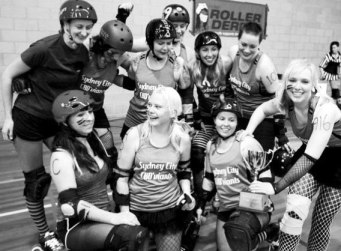 So who won? How did the final end? Honestly, when the last whistle blew I had no idea. Partly because I was distracted by the glamour and spectacle, but mostly because I didn’t know how to keep score. But according to a real journalist who was paying attention, the scores were neck and neck until the D’viants pulled ahead in the final 10 minutes to win 132 to 118. Sounds about right.

There is something empowering even just about watching it. Like you wanna BE these girls. And if I knew how to roller skate, I’d want to know where to sign up. But for now I’ll just plan to be at the next game.

But if you know how to skate and want to develop amazing quadriceps, The Sydney Roller Derby League is looking for experienced skaters to join them for the next season. The tryouts are in August, so get on it! Visit the SRDL website to find out how.

Q: What is a Rollergirl?

Two Ton Teyla: “She’s tough. It can be an overt confidence or a quiet kind of resolve to play hard. Derby takes all kinds, it’s true. You hear many tag lines about the ‘by-day-by-night’ paradox of a derby girl, about tattoos and piercings, which is true for some in our league; but what’s more interesting is the transformation that occurs when women join the league – they get better at skating, they get more fit, more confident, more involved in the running of the league, and close with an incredible group of women!”