Autostraddle wonders why they have the power when they keep fucking/fucking up: “Evangelicals, Rapists, Tramps & Thieves: Why Anti-Gay Leaders Love to Sin, Are the Sinners.” Maybe it’ll make you angry and you’ll wanna do something about it and you can read about The Lesbian Avengers: Dyke Power!

Sometimes instead of doing things we have our interns do things. This month they saw a musical about a bunch of hippies, a lifetime-style movie about a transsexual and a reading of a screenplay about these two girls in the old days who are in love: Intern Camp.

GLAAD has released their report card Network Responsibility Index to tell all the networks who’s doing good with the gays and who needs some after-school tutoring from Alan Ball.

Methodology: For GLAAD’s third annual report, we divided our analysis of reports into two sections (network & cable) and found neither section provided statistics by sexuality/gender, therefore requiring us to read the entire report line by line to gather some info about the ladies. We suspect this decision was made because lumping gays, lesbians and transpeople together is less depressing for the lesbians and transpeople and we have enough problems as it is.

Perusing the entire 41-page pdf [excluding the section on Showtime which was confusing as it’s unclear if they’re counting The L Word or not as they exclude specific numbers on that show so we counted nothing from that network (if there was an all-gay-male show that we did include, that’d skew the stats, but there isn’t, so this is scientifically sound) (based on our own definition of “science”) and we only included the networks with full reports, rather than the little ones with blurbs at the end] we found 28 lesbian or bisexual female references (including a murdered lesbian astronaut and her girlfriend from an episode of Law & Order) and 86 mentions of gay or bisexual male characters. Most of those females were from Grey’s Anatomy or The Real World/Road Rules Challenge.

Of these, 9 queer females were cited as recurring characters, opposed to 35 queer males.

Look, we made you a graph! 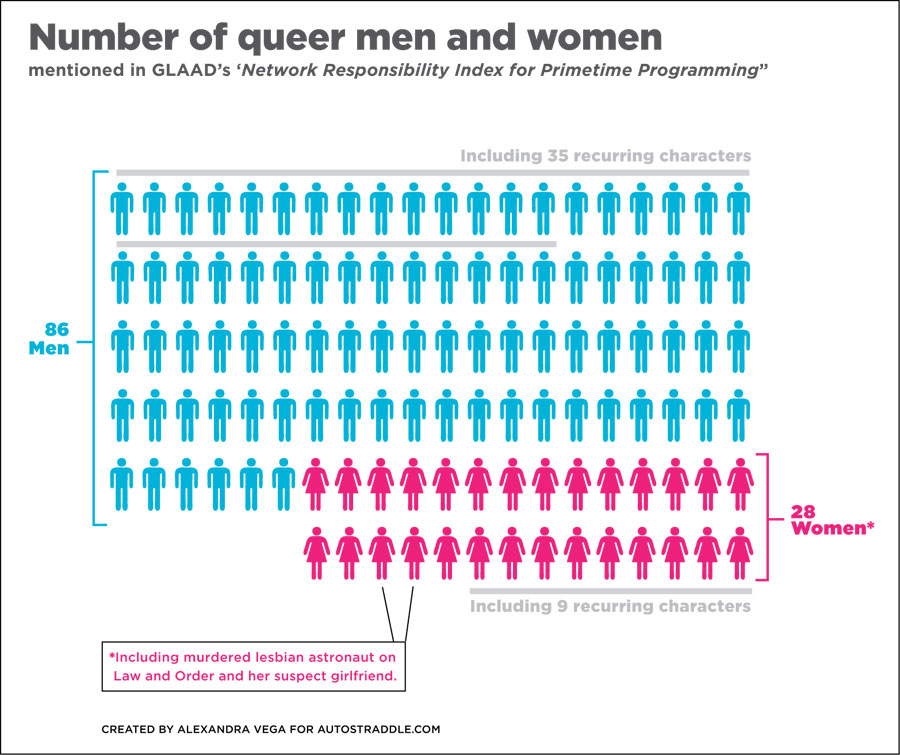 We believe this gendered discrepancy is owed in part to the tendency of reality shows to select gay male judges because they are funny, have nice hair, and like to judge. Our other theory involves the patriarchy.

Other highlights of the report (we read it so you don’t have to!) include:

+ ALSO THE DEATH OF JENNY: “The cancellation of The L Word also means that the coming 2009-2010 TV season will be the first time since the premiere of Will & Grace in 1998 that there won’t be a mostly gay series on air.”

+ WHITEWASHED: “Television characters in general are predominately white, regardless of sexual orientation.”

+ MR & MRS. JAY: “The CW leads all networks in terms of being inclusive of the African American/black LGBT community. The majority of these impressions are made on America’s Next Top Model because of the prominence of J. Alexander.”

+ HIGH HOPES FOR MELROSE: “The CW’s fall shows are ripe with opportunities … the highly anticipated reboot of Melrose Place takes place in gay Mecca West Hollywood … can make up for the shortcomings of the original.”

+ GLAADBERT TOO LITTLE TOO LATE: “By now everyone is aware that Lambert is gay, but he did not confirm this fact until recently … as such,  American Idol was not counted as having any LGBT impressions.” (13)

+ SOMEONE NEEDS A SENSE OF HUMOR: “Family Guy aired an offensive half hour episode in which Peter was injected with the ‘gay gene” and proceeded to act out countless gay stereotypes.”

COME OUT LIZ LEMON: “Though NBC has stepped up … there is still ample room for growth. The Office could benefit from increaisng Oscar’s screen time … 30 Rock is infused with LGBT-inclusive humor but would be better if one of the show’s characters came out of the closet.”

+ HBO WINS: Out of 14 original shows, 10 feature LGBT-inclusive content, with True Blood leading the way … “Ball has used the persecution of vampires on True Blood as a thinly veiled allegory for obstacles faced by the LGBT community … however, HBO has room to grow in terms of lesbian and transgender representation.”

+ HOPEFULLY THEY’LL BE JUST AS INTERESTING AS KC HERSELF WTF: “The retooling of The Hills to focus on Kristin Cavallari presents an excellent opportunity to prominently feature some of Kristin’s gay friends.”

+ YOU DON’T SAY: “The level of visibility for lesbian and bisexual women on The L Word has yet to be matched by any show on broadcast or cable television since.”

+ UM BUT I THOUGHT KEN SEELY WAS GAY WTF: “History shows that A&E is a network not opposed to LGBT inclusion and yet this season it barely produced tow hours of content.”

The rest of the daily fix, after the jump!

HEY WHAT HAPPENED TO THAT GAY KISS: “Programs are sometimes tweaked and edited prior to screening for a variety of reasons (eg: to meet time constraints). A few edits were made to what was on the preview disc of Perfect Couple.” (@tvtonight)

THAT F*CKING WEDDING DANCE: Secrets behind the wedding dance video that is sweeping the nation! (@msnbc)

TAKE A LOOK AT YOURSELF AND MAKE A CHANGE: What Alexis Cohen’s Death Means for American Idol, And For The Rest of Us:

For the show, it means nothing, except perhaps a bit of publicity and a moment of silence, if that, in an upcoming episode. The show is not bound to Alexis Cohen: there are bigger stars, newer faces, stranger characters to seek out and exploit. But for Alexis Cohen, and for many other reality has-beens or almost-weres, the show is always bound to them, following them where ever they go, even in death, a reminder that our strangest realities are the ones we allow others to create on our behalf. (@jezebel)

WE NEED SOME DYKE ACTION STAT: Statue Honoring Lesbian Activist Destroyed: ”Vandals recently destroyed a statue at an Uptown neighborhood memorial garden, less than a month after another statue was stolen and later recovered, according to a published report.” (@cbs2chicago)

CONFIRMED FOR THE FOURTH TIME THERE WILL BE A LESBIAN MOMENT ON HEROES: Comic-Con 2009: ‘Heroes’ Season 4 Plots and Lesbian Kiss (@buddytv)

EX-GAY LEARNS TO READ, DOESN’T LIKE ANY BOOKS BESIDES THE BIBLE, IMMEDIATELY WRITES HIS OWN BOOK: Exodus International’s Alan Chambers Pens New Tome, ‘Leaving Homosexuality’– The leader of the “pray-away-the-gay” organization Exodus International, the dapper Alan Chambers, has penned Leaving Homosexuality, in which he declares, “Once you deny sin’s power, you can live a free life.” (@pamshouseblend)

BEST IDEA EVER: Guerilla Gayfare Challenges Prejudice Through Strength in Numbers: ”Close to a hundred people from the lesbian, gay, bisexual and transgendered community showed up at the downtown club around midnight. […] The unexpected invasion was part of Guerilla Gayfare, a monthly event where people from the gay community go to a stereotypically ‘straight’ bar.” (@the canadian press)

HILLLL: Hillary Clinton: ‘It Will Take the Right Woman’ to Win the Presidency: Secretary of State Hillary Clinton stopped by Meet The Press this morning and discussed, amongst other things, the probability of a female president being elected in her lifetime, something she believes is possible.”_ (@jezebel)

ONE MORE THING: Why bother going to San Diego for Comic-Con when you can just sit in your living room and read all the good coverage of it! 10 Things From Comic-Con You Need to Know. (@gawker)

This week I will soothe three upset women with the power of poetry.

Poem #2 for LA w4w – Missed Connections: Goodbye Love:
What an odd place
to say such a lovely thing.

“In the end, I’m sure you weren’t into girls, but thank you — I now know what I’m looking for in the woman I spend the rest of my life with.”

Please calm down
Everything is going
to be okay.

ONLY FEMEE LESBIANS!!! NO BI-CURIOUS OR BI-SEXUALS!!!! IM NOT HERE FOR SEX, 3SUMS NONE OF THAT CRAP!!!!!! WHILE UR REPLYING TO MU AD PUT “REAL FEMM HERE” SO I KNOW THAT UR NOT SPAM AND NO STUPID WEBSITES!!!!

Soooo…the healthcare system in this country is broken, for a variety of reasons. Mainly though, incentives are misaligned and the pursuit of profits has come at the expense of quality, affordable and effective care. Blergh.
You can read more about all this here.
Anywaaaay, Obama & Co. is trying to make the system better: There is a bill going around congress right now—and while it is not perfect – it is a huge step in the right direction. The bill introduces a public option to healthcare, which would allow individuals to either keep their existing health insurance (if they like it and/or have one) or move into a public option if they don’t have health insurance or don’t like the plan they have. The passing of the bill is crucial, especially for us ladies who are working hard and don’t have insurance, or are underinsured, or can’t get insurance through our partners because our relationships/partners are not recognized as legitimate.

We have to get it passed!
PLEASE PLEASE PLEASE call/write your democratic senator today and tell him/her you want a public option in the bill or you wont re-elect him or her. Here is a list of members of congress that are also critical to call/write and talking points. Please spend 10 minutes today!

Yayyyyy! Go healthcare reform! You all are awesome!

sign up for our newsletter
Related:daily fix 1.0GLAADWhere We Are On TV