‘Allo and welcome to this recap of Legends of Tomorrow Episode 607, Back to the Finale Part II, aka the one where love never says die.

We pick up right where we left off, with Sara looking at her own dead body. Bishop feigns empathy, saying he’s been in that same position before, and encourages her to embrace her new clonely reality.

Speaking of clones, Ava is back on the Waverider in full mourning mode, crying and watching the video Sara made on David Bowie’s camera about proposing to her girlfriend over and over and over. 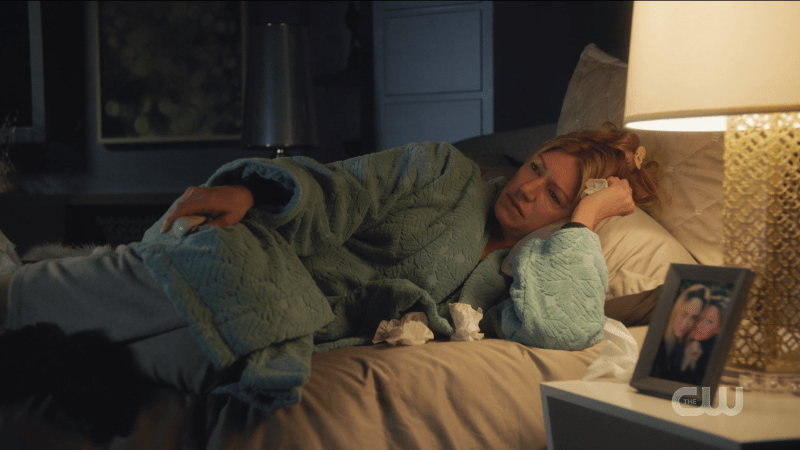 How did they get this photo of me six months into quarantine?

Nate comes in to check on his depressed captain and in a relatable turn of events, despite being a deep well of despair, Ava asks if her friends are okay. Nate assures her that they’re coping in their own way, and reminds her that even though Gideon can deliver her anything, her friends are there for her for the things that can’t be provided by technology.

When Nate returns to the rest of the Legends, who are also mourning but in a staring-and-drinking way, though Spooner wishes they could DO something. They realize Behrad is missing from the group mope so Nate, who is apparently self-appointed “reluctant” interim captain (clearly a matter of seniority not superiority) decides to find him, and Zari, who is interim co-captain (which makes sense since they usually have two captains) goes with him.

They vaguely wonder if Sara’s demise means Mick is doomed too but Constantine assures them all that Mick is made of hearty stuff and more than likely has survived.

And sure enough, Mick is not only surviving, but thriving, as he is rolling around in a containment pod with Kayla. They poke their heads out and realize the air is back to normal so Kayla gets to work on fixing the ship. Mick wants her help to save Sara but that wasn’t part of their deal; her compromise is that she won’t leave without him…though this offer expires as soon as all the moons have set. 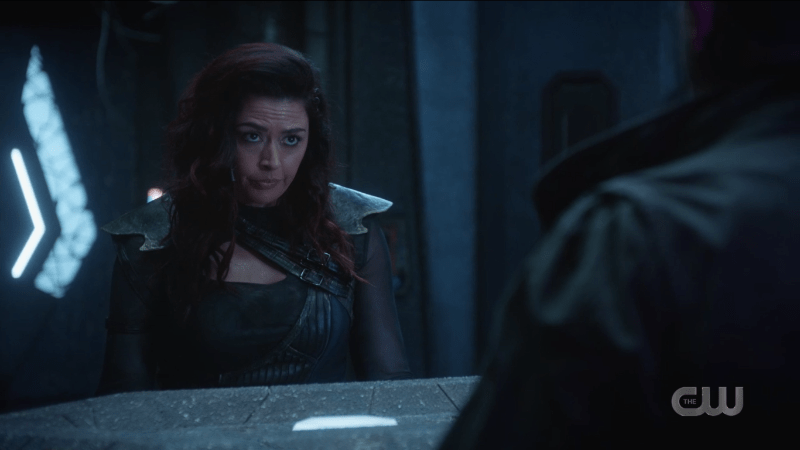 I’m going to start using the Faces the women on Legends make as responses to trolls on Twitter.

Sara is still trying to make heads or tails of Bishop’s “brilliant” plan to “save” humanity when Guard Avas show up. Bishop borrows one of their guns to kill his broken body so he could be reborn in his fresh clone body. Bishop then gives her his villain monologue, about wanting to make a world full of half-Sara-Lance, half-alien hybrids. Sara…super does not want this. 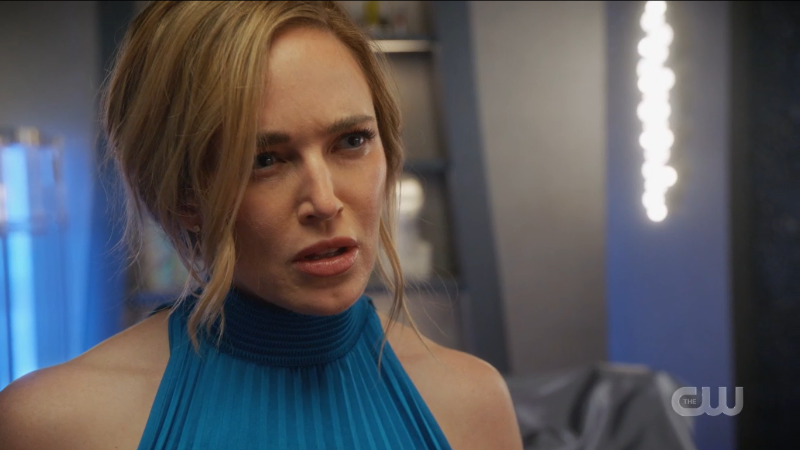 See what I mean? These “wtf dude” faces are gold.

She tries to take her engagement ring off her old dead body but Bishop swipes it from her, saying it’s a reminder of her old life that she has to let go. Sara stands up to Bishop; she’s not going to just sit back and let him do this. She dies literally all the time, and her girlfriend is a clone, so neither of these things particularly faze her. So Bishop decides to tinker with his formula and make another version of Sara that will be more…agreeable .

Outside, Mick runs into some Ava guards and is ready to fight but it turns out it’s Gary and his band of rebel Avas so they join forces to go save Sara.

Elsewhere on the Waverider, the Legends can’t find Behrad, but they quickly put together that in his desperation to save Sara, he decided to go back where it all began to undo what’s been done. So the Legends follow his trail back to London 1977, the night we said goodbye to Charlie, now with 100% more Spooner.

They find Behrad, who is afraid they’re here to stop him, but in fact they’re here to help; because the only thing that makes a very good bad idea better is a couple of friends. They do establish some rules though: Ava can’t find out, and they can’t interact with their past selves, lest they Barry Allen the timeline.

As they try to piece together where they all were that night and if Sara was on her own at any point, Spooner realizes that if they do undo this, she’ll have never met the Legends, which she claims to be okay with. 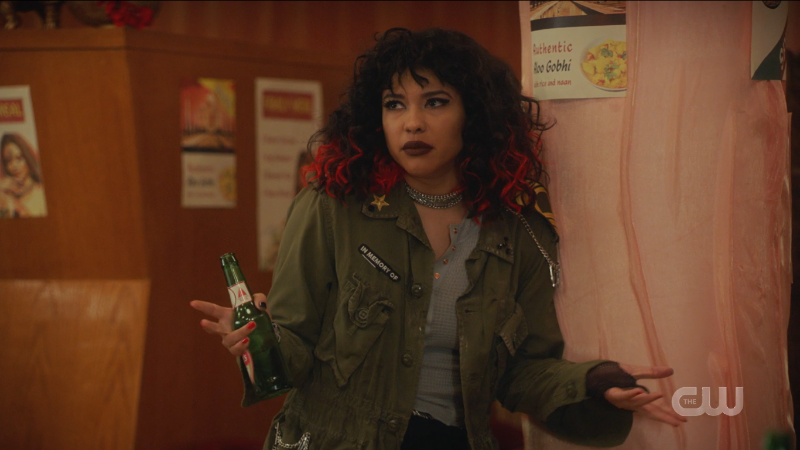 Spooner needs a lesson about not putting her emotions in little boxes from a certain sexy scientist.

Just then, Behrad remembers that he went on a smoke break at one point that night so now is a perfect time to try to get Sara. He finds her and tries to convince her to come back with him to the Waverider, but she’s a girl on a mission and nothing will stop her. She’s going to propose to Ava tonight, with her mom’s ring, and nothing will get in her way.

Behrad is moved by this but still really needs her to come with him until Ye Olde Ava from the original timeline comes out and pulls Sara back in to watch Charlie’s band play. 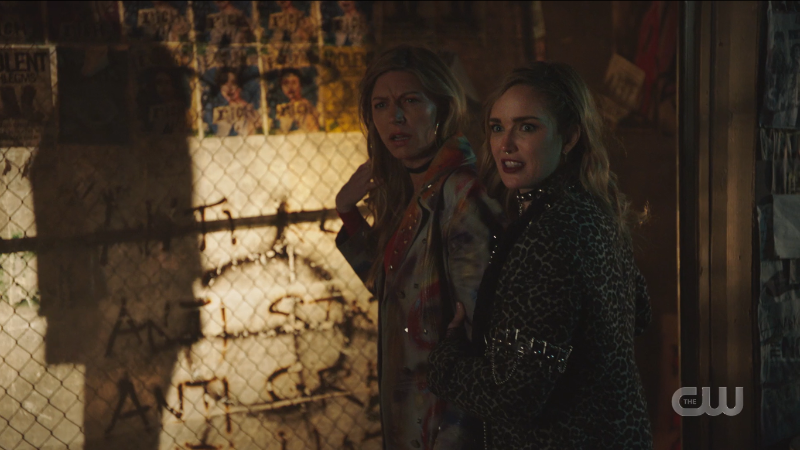 Gods I’m so grateful we went back to the Punk Look for another episode.

It was a solid first attempt by Behrad, but alas, a failed attempt.

Up on Bishop’s ship, Sara fights her way out until she runs into Gary and the Avas. She gives them a brief rundown of Bishop’s plan, and Gary isn’t sure an Avalance planet is all bad, but everyone ignores him and Nurse Ava tells Sara she might know how to stop Bishop. Sara is pleasantly surprised to find Mick in their ranks, but he tells her that “the ship sucked” without her, which is Rory’s way of saying “I love you, sis.”

In London, Zari confesses that she and Constantine can try for take two of Operation Stop Sara From Getting Abducted by Aliens, because there was a brief period of time where they had also peeled away from the group. When they find Sara, she’s throwing up in the bathroom because she’s so nervous about proposing to Ava. Zari and Constantine are supportive and encouraging…to the point that it’s incredibly sus. 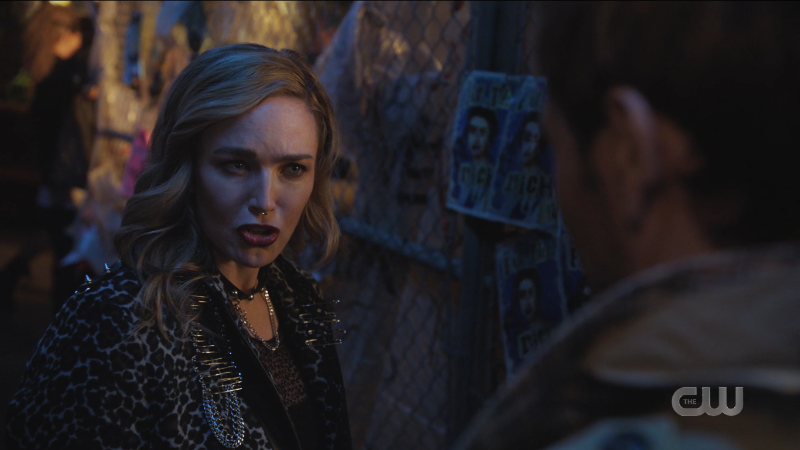 “I thought you were with Valerie on team LOVE IS A LIE?”

When Sara brushes them off and leaves, Zari tells Constantine as much, and realizes (because she’s super smart) that something is off and that Constantine doesn’t have his magic anymore. And that’s why he’s suddenly playing teacher’s pet; he thinks if they can reset the timeline, maybe they can reset his magic, too. 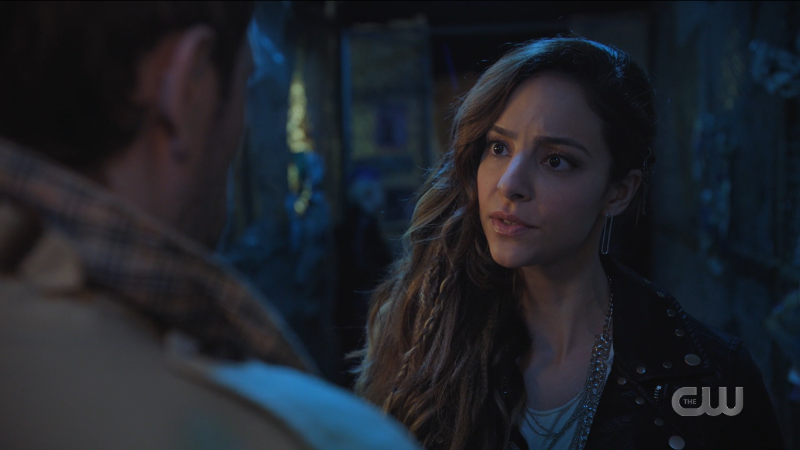 The second attempt to save Sara a bust, they leave the bar, but Ye Olde Ava sees one set of Zari and Constantine enter from an entirely different door at the exact same time. Knowing exactly what this means, she finds the Legends in the restaurant they made their base of operations and says she knows they’re not her Legends. She notices she’s not among the troupe and gets nervous that she’s dead but absolutely DOES NOT WANT TO KNOW maybe just a hint NO ABSOLUTELY NOT EVEN A NOD. 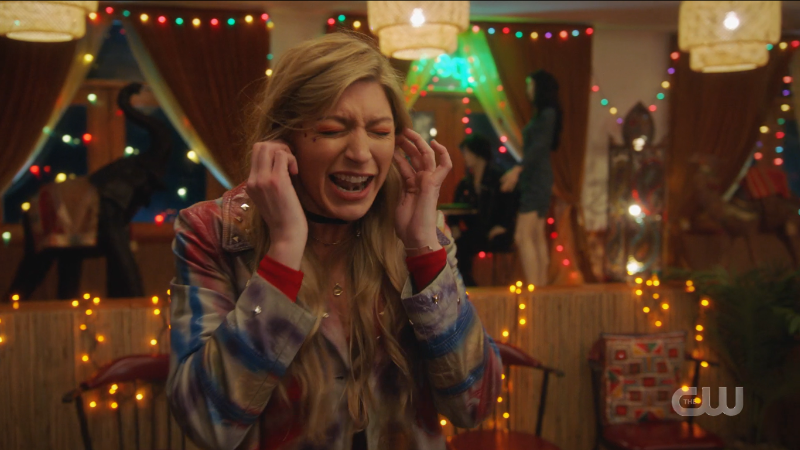 I don’t know exactly how Jes Macallan manages to be a put-together boss-type and also an absolute dork at the same time but here we are.

She starts chugging alcohol to black out in an attempt to forget she ever saw them, which perhaps should have been my first clue about how this mission should go, since very hungover after a blackout is how she started this season, but alas I hadn’t quite caught on just yet. Ava orders her team back to their original timelines and storms off.

Up in outer space, Sara and the Avas are setting up bombs around Bishop’s ship and Sara cuts her hand and watches it heal up with incredible speed. She has a kernel of fear about what this could mean and tells the team to hold their explosion plan while she runs in to talk to Bishop real quick. 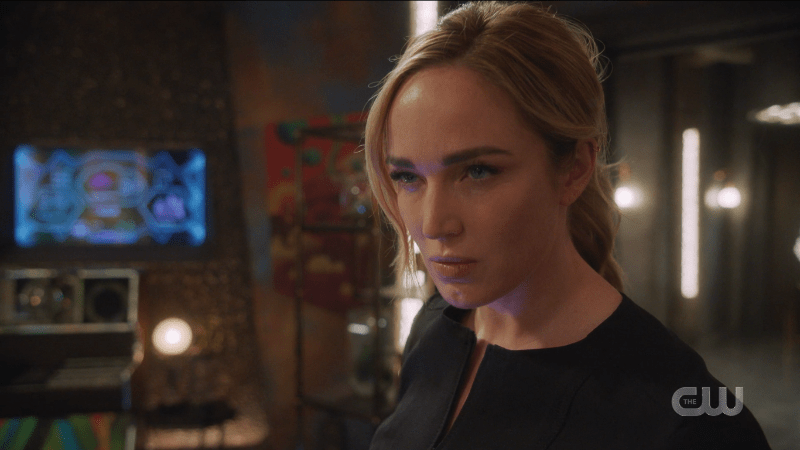 This is how I glare at my Twitter timeline most of the time.

First, she Hermione punches him square in the nose. Then she demands to know what he did to her. He explains that he spliced her DNA with alien DNA, which he’s been trying to explain to her all this time, so she punches him again.

She wants to be human again, and he wants her to imagine what they could accomplish together. Realizing she won’t be winning this fight, she takes her ring back from him and heads off to make her own human-only clone version of herself. 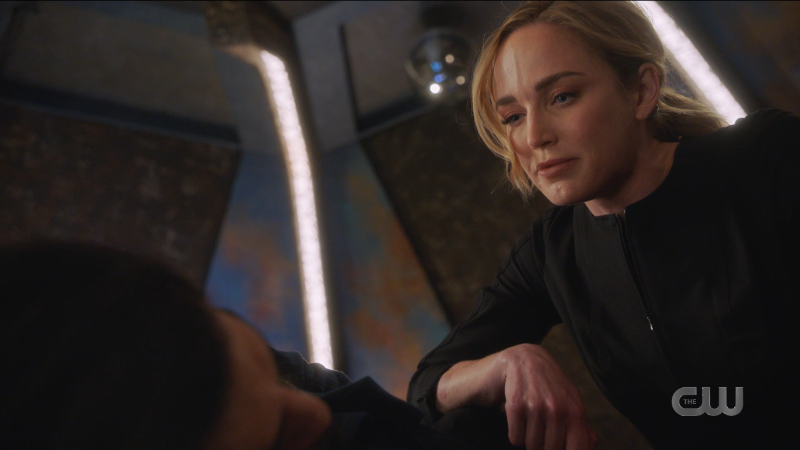 Sara finds Nurse Ava and asks for her help making this clean clone of herself and at first Nurse Ava balks at the thought; she’s a helper, not a doer. But Sara encourages her, she knows she can do it. And what’s more, she trusts her to do it. 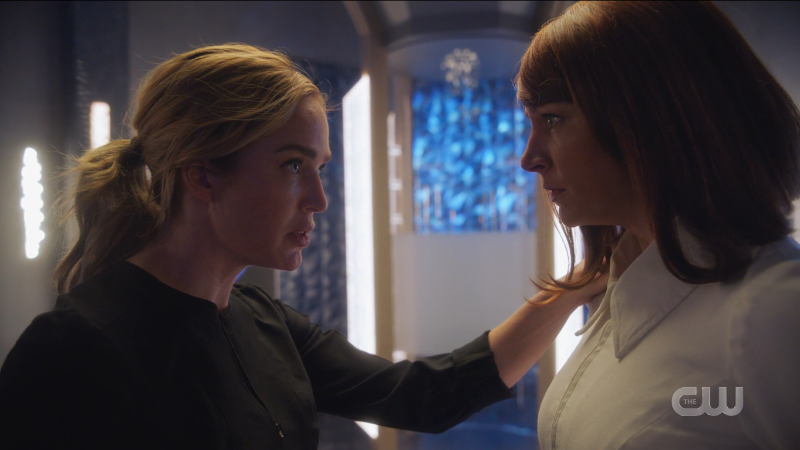 I am HERE for the Ava Liberation Movement.

Trying to follow Ye Olde Ava’s orders and also save Sara, the Legends move on from trying to directly talk to Sara to perhaps trying to trick the aliens into abducting a mannequin sara full of fireworks. Zari thinks her brother’s desperate plans are getting a little out of hand, but luckily while he’s on that track, they realize they can send Spooner inside to keep an eye on things since she wasn’t there the first time around. They send her in with orders to not talk to Sara, but of course as soon as she’s settled at the bar, Sara sidles up right next to her.