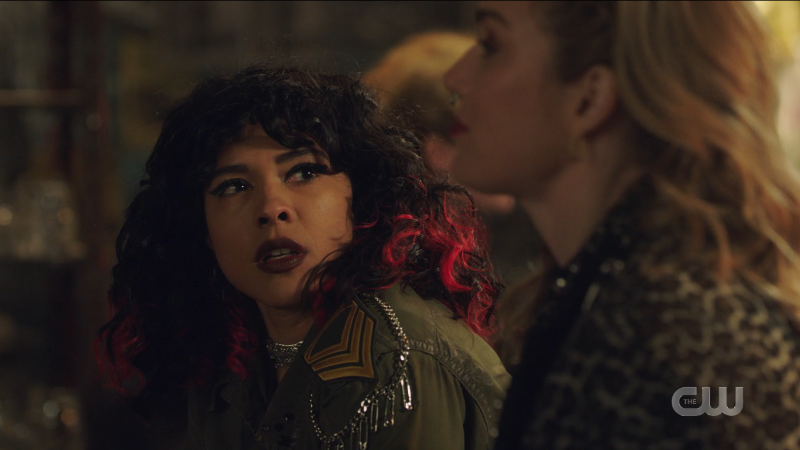 This would also be my face if someone as attractive as Punk!Sara got this close to me at a bar.

Sara asks this cute stranger for a distraction so Spooner tells her the truth as she knows it; that she was abducted by aliens as a kid and now she can hear and feel them, and that she’s afraid she’s turning into a monster that the people she lives with won’t be able to accept. She assumes by now Sara thinks she’s crazy but Sara says possibly the wisest thing Sara Lance has ever said: Crazy is the word people use when they’re afraid of what you’re capable of.

Sara tells Spooner that she understands what it’s like to be afraid of yourself, but that she’s just on the beginning of her journey. She tells her something that it took her years to learn herself: she shouldn’t go it alone. Spooner is worried about the what-ifs of hurting her friends, but Sara says that if you’re going to consider the negative what-ifs you have to consider the positives too; what if they accept and help her instead? 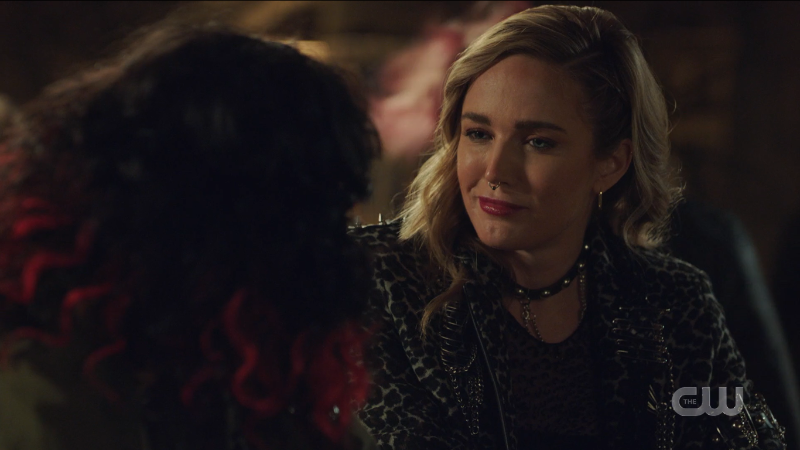 I think Sara is going to be a good influence on Spooner, a thing I never would have thought I’d say come three seasons ago.

She admits to Spooner that she is planning on proposing to her girlfriend tonight, but she’s afraid that she’s still in the middle of her journey of figuring out who she is, not the end. She’s worried about hurting Ava, so Spooner turns her own advice back onto her: What if she helps her? 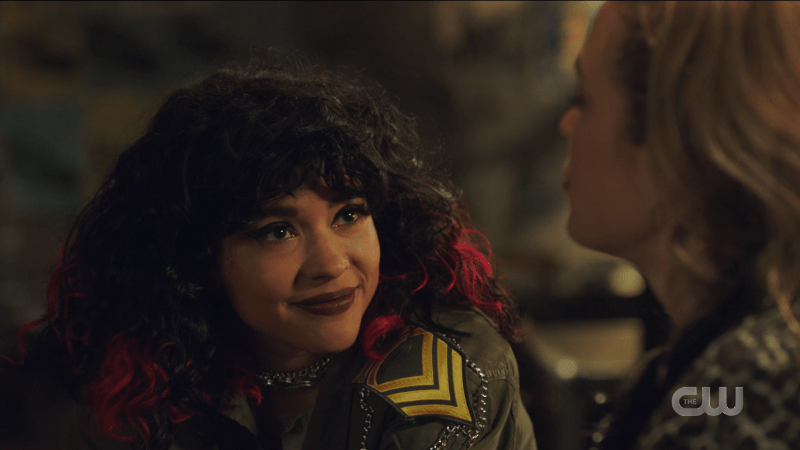 Having a mirror held up to the advice I just gave is a little too relatable, Spooner.

Inspired by her new mystery friend, Sara runs off to propose, pausing to declare as much to David Bowie’s camera, which is where I personally finally caught on that this night is going exactly how it went for a reason; we were already in this timeline, this is already how it happened.

This theory is further proven by the fact that Behrad runs out for one last ditch effort to save Sara, calling her name, causing her to pause and break off from the group…and get abducted. Just as it happened. 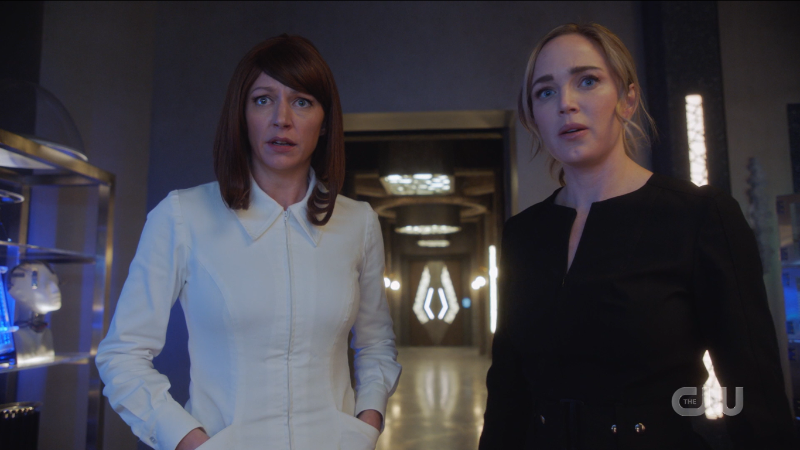 “Dear god is this ANOTHER ad for Superman & Lois?”

Meanwhile, Mick fries Bishop to a crisp, which he thinks is a win, but turns out his next backup plan was to upload himself to the cloud. So now it’s a race against the clock; and it looks like Bishop’s upload will finish before Sara’s download will.

When Mick sees what Sara is doing she explains that she technically died, which Mick is unfazed by, because of course she did. But the issue here is, she came back a monster. And it’s something that’s happened before, something that has always scared her; what if she loses control, what if she hurts the people she loves. She says her body isn’t her but Mick sees her leading and encouraging an Ava, making plans, worrying about her friends. Mick sees a survivor. Mick sees his Captain. Mick sees Sara Lance, his oldest friend.

And y’all I never thought Mick Rory would make me emotional but he says, “We need you, please,” and I almost lost it. 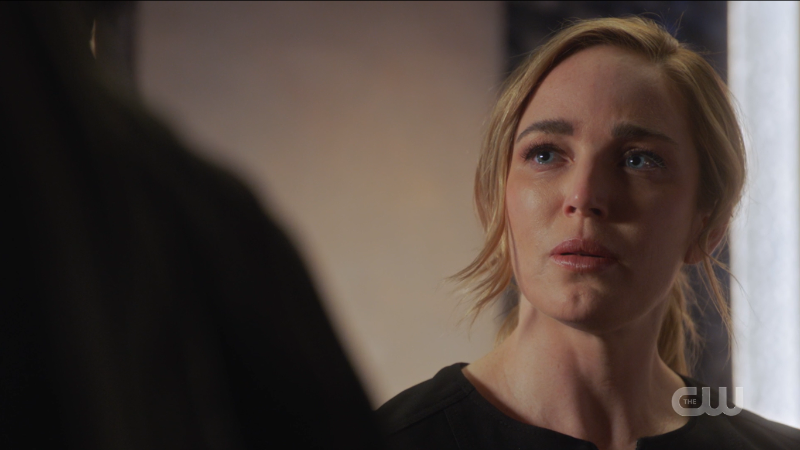 As much as I hate to admit it because I’m still mad at her, Caity Lotz really brought it this episode. Top to bottom, well done.

Sara is also moved by this speech and tells the Ava to set off the bombs as they all run toward Kayla’s ship. When they get there, Nurse Ava says this is goodbye; this will be a planet of Avas now, and they’ll be okay. They’ll be better than okay actually: they’ll be free.

When they get to the ship, it looks like Kayla left without them, which bums Mick out, especially since the night aliens are fast approaching. But then Kayla appears and tells them that she just had to get the ship off the ground away from the aliens and is ready for them to board.

Seeing Kayla’s human form for the first time, Sara is duly impressed, and in another timeline Mick might have had some competition with his captain for her attention. 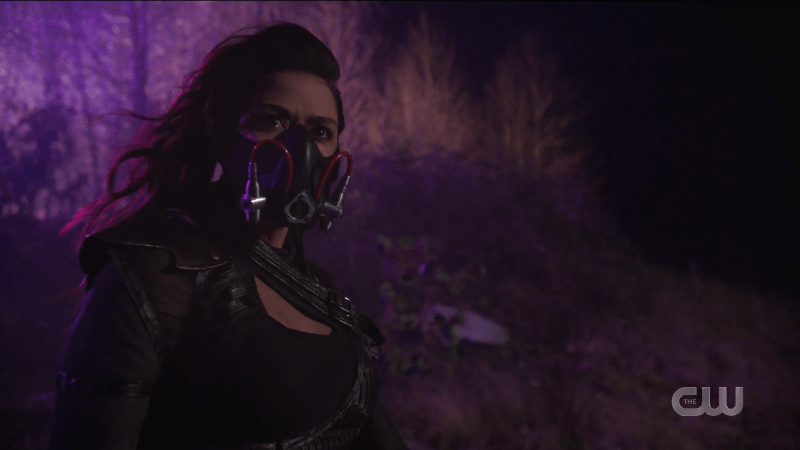 I would watch the apocalypse movie this shot would be the poster for.

Kayla drops her human form, though, to save them all from an onslaught of aliens, and they all make it to the ship…well, everyone but Kayla. They try to wait for her while they get the ship ready but the aliens don’t stop coming and Kayla is nowhere to be seen so they just…go. And I have a feeling we haven’t seen the last of Kayla but I still was surprised there wasn’t more of a moment of conflicted feelings about it. Maybe because Sara saw Kayla gobble a man up/got kidnapped by her. I’m still hoping she made it onto the ship and is just healing in a pod somewhere.

Down in Londontown, Behrad is bummed and Astra is doing her best to comfort him, though she is inexperienced at such things. But she does assure him that even though he failed to save Sara, it’s better than he tried and failed than never to have tried at all. 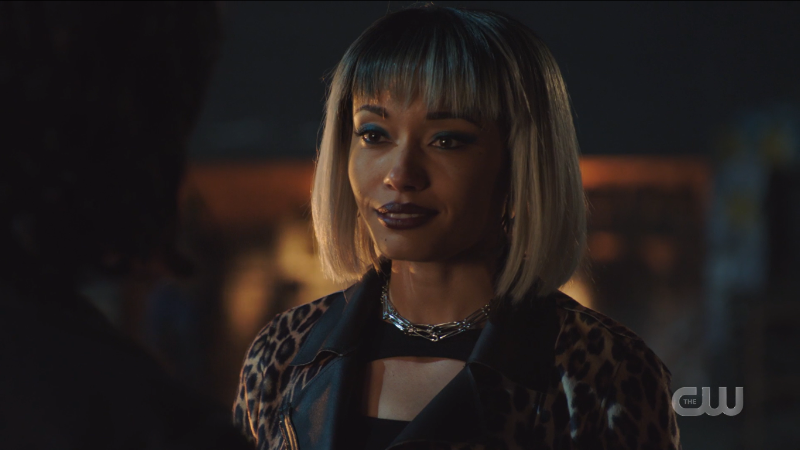 Astra/Behrad is an odd pairing I could get behind.

Up on the Waverider, Ava is still moping when the video of Sara starts to glitch. Ava feels more defeated than ever, and then she hears her favorite voice call out to her. She’s afraid to turn around, afraid she’s dreaming and that if she moves she’ll wake up and it will be over. So Sara comes to her instead, wrapping Ava up in her arms and promising to never go far from her ever again. 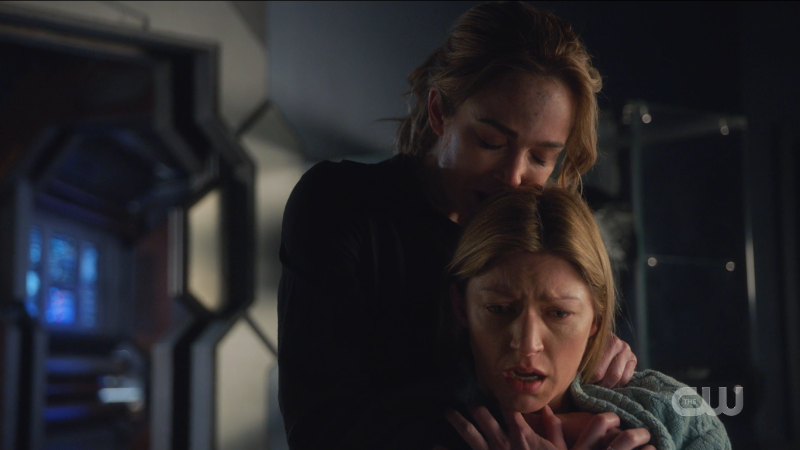 “What if we rewrite the stars? Say you were made to be mine. Nothing could keep us apart, you’d be the one I was meant to find.”

Until they realize the rest of the Legends are still MIA, so they go back to London 1977 to find them. The Legends are about to hold a memorial service of sorts, a toast to Sara involving their favorite stories about her, and in struts Sara, ready to hear these tales. Everyone rejoices, glad this arc of separation is over, content to have their Captain back. 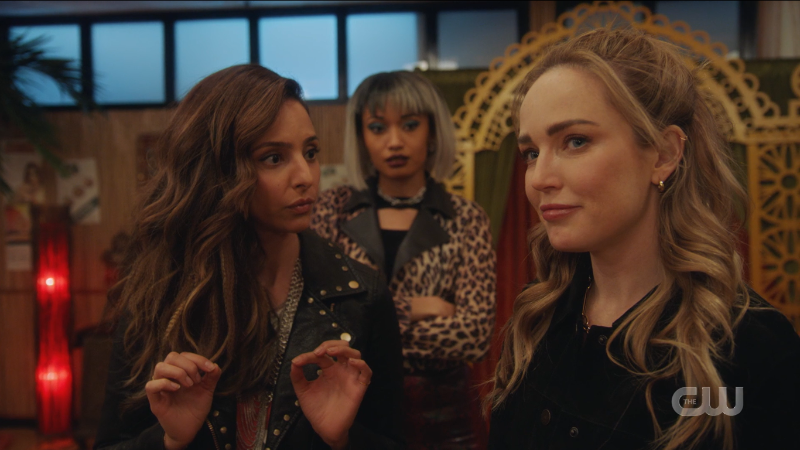 As they walk back toward the Waverider, this time Ava clutching to Sara like she’s a balloon about to float away any second, Sara stops them and says she has something she wants to do before they go one more step.

Sara turns to the love of her life and gets down on one knee and Ava blurts out YES but Sara stops her; she has a whole thing prepared and she would like to get through it! 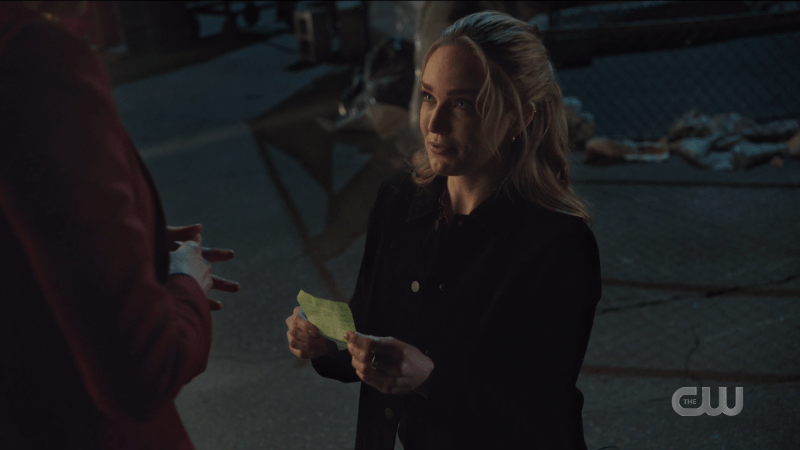 HER LITTLE PAPER I cannot.

I usually hate proposals (and wedding vows) in fiction, they always feel too saccharine or too fake to me, and I simply am not a cheesy romance kind of gal. But this proposal was Very Good. It feels hard-earned (and frankly would have BEFORE this whole seven-episode rescue mission, but even more so now) and like the genuine right next step for these two badasses.

Especially thinking of how far Sara has come, not only from the bratty socialite on Oliver Queen’s yacht, but from the Nanda Parbat-trained broody assassin, the ragey vigilante, the reluctant hero. And from the girl who made deep connections with women across space and time but kept them at arm’s length, never not meaningful, but never anything lasting. And now she’s down on one knee saying, “Wherever you lead me, that’s my home.” 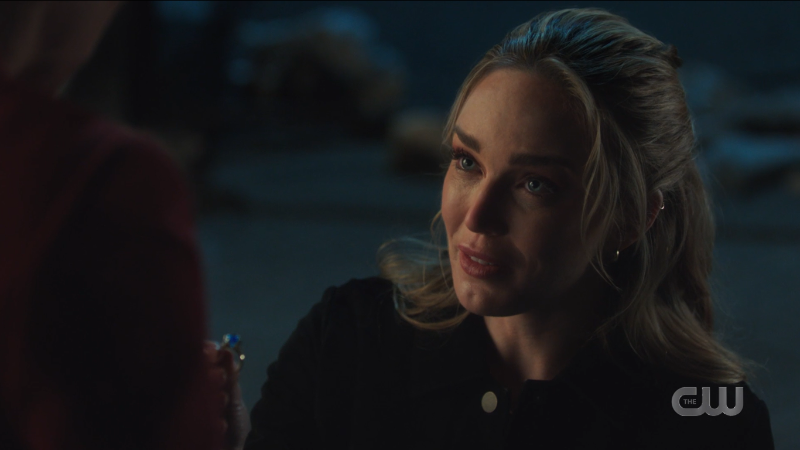 And once she’s finally allowed to stop holding her tongue, Ava bursts out the yes she’s been yelling since the moment she found Sara’s plan and they seal it with a kiss. 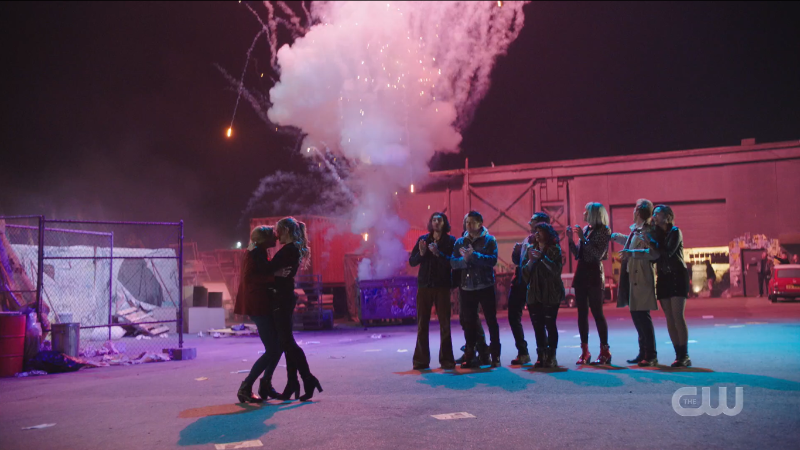 You know I don’t usually do a big group shot but this whole sequence was so lovely I HAD TO. Look at this tol and smol and their family behind them and the fireworks!! A bisexual ex-assassin and a lesbian clone, united! Queer heroes in love!!!! Happy Pride!!!!!

The Legends all cheer, their moms are getting married! And the fireworks from the mannequin Behrad shoved in a dumpster goes off and truly what could be more Avalance than celebrating their engagement with a literal beautiful dumpster fire caused by the Legends’ well-intentioned but ill-fated plan.

Next week, we’re going back to the Wild Wild West in an episode directed by Diggle. See you then!