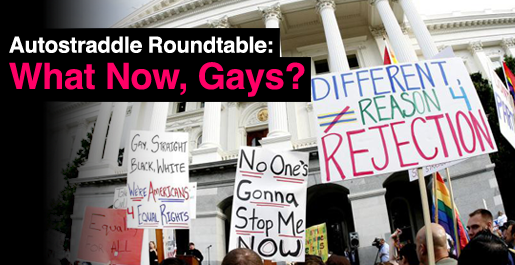 Soooooo … Prop 8 was upheld. That was neat. What do we do now?

In the hours and days following the court’s decision on Prop 8, many pundits, politicians and writers started talking about where we go from here. Do we try again in 2010 or 2012? Should we dump gay marriage as a cause and focus on universal health care and better adoption laws? Do we re-think our approach, supporting only organizations, businesses and political leaders who actively support our values? Perhaps we should concentrate on earning rights for all unmarried people? Do we take it to the streets?

So we decided to talk about what we think should happen next — and what needs to happen for Prop 8 to be overturned with the ultimate goal of equal rights for all. What’s holding us back, what can we do, what other things need to happen in America for our laws to change?

There’s SO MANY THINGS that need to be changed/fixed/improved, so while I do feel that “Don’t Ask Don’t Tell” should just go away already, I’m gonna actually write about something else I feel very strongly about—the separation of church and state!

Disclaimer: I am not an expert, nor did I do any research to accompany the following paragraphs.

Back in middle school & high school, we’d read about all the great lengths our forefathers went to to ensure a strict separation between church & state and blah blah blah but we all know what that really means. We’re “one nation, under God,” so obvs this church/state thing was problematic from the start.

And since we don’t have time machines (I wish!) and can’t go back and try to explain to the old white dudes in the powder wigs about abortion and gay rights and all that good stuff, we have to figure out how to make it work now.

What each couple does with their civil union license is their choice. They could get “married” at their church or synagogue! They could have a small party for their friends and family! Or they could do NOTHING at ALL! It’s entirely up to them based on their families and beliefs. Done and done.

Unfortunately, I don’t think there will come a day in the US where we will have an actual separation of church and state, I think it’s (unfortunately, in my opinion) too much a part of what we are. And when I say “we,” let me be clear: it’s a “we” that I don’t feel as though I’m really a part of. Maybe it’s because I don’t agree with war, maybe it’s because I fully support an individual’s right to choose what is best for them, maybe it’s because I don’t currently have equal rights under the law. But I live here and I’m a citizen and I’m not planning on revolting or leaving any time soon. But there are certain things that the federal government can do to ensure that things get on a better path.

Don’t try to change the definition of marriage—remove it from all government and legal documentation and jurisdiction from here on out. The term “marriage” is causing far more bad than good and besides, it’s an outmoded patriarchal institution that is rooted in misogyny and other terrible things. States should be giving out civil union licenses, not marriage licenses. And we already know what a civil union is—same thing as “marriage” but without the name (in most instances). So just get rid of the name. Then, any consenting couple can go get a civil union license, which grants them all of the rights and privileges as married couples are granted now, just with a different name. Then, what each couple decides to do with that is their choice. They could get “married” at their church or synagogue! They could have a small party for their friends and family! Or they could do NOTHING at ALL! It’s entirely up to them and their families and beliefs. Done and done.

Certainly, in my personal idea of a Utopian society, there’s very little organized religion and the government leaves its citizens alone, but obviously that’s not happening any time soon. If we are able to remove religiously-based terms and institutions from federal and state government, though, I think that it will lead to bigger and better things over time.

In my humble roundtable opinion, there’s nothing more effective and important in our everyday little gay/bisexual lives than being 100% honest about who we are to ourselves and to others around us.

Note: I didn’t use the term “come out” in that sentence. Not to get annoyingly specific about my own situation, but I never “came out” to family and friends because it just wasn’t for me. I felt it would perpetuate categories with them. I’ve only “come out” strategically in conversation with strangers.

Example: In a conversation with a few friends and acquaintances, one in particular felt it appropriate to throw around gay slurs and “faggot” and misogynistic language as well (cause they usually go together, right?)

Agree with how hot the waitress is when the guy next to you does. Proclaim your love for Jennifer Beals to your friends when they’re all hetero-crazy over Zac Efron (he’s totes cute, so you can agree with them too!)

So my interjection was “Um hey! Did you know I’m gay?” and I think it threw him off a bit. So he says“Yeah!” and I continue with “So is there a problem with that?” “No. Not at all.” That’s all it took, really. He started back-tracking. Even if this guy’s behavior or general opinion hadn’t changed at that moment, the seed had been planted. He saw that it wasn’t safe to use those words after all, that his opinion wasn’t universally respected by those around him.

I don’t think many people (or friends/acquaintances/strangers) want to offend us right to our faces.

The thing is, if this gentleman’s language was racist, you know he wouldn’t dare talk like that in front a black dude. It’s scary that we have to let ourselves be known because it’s not always written on our foreheads. But I’m telling you, for yourself and for the rest of us – it’s totally worth it. It’s all that we CAN do right now.

And this stuff doesn’t always have to be confrontational! Agree with how hot the waitress is when the guy next to you does. Proclaim your love for Jennifer Beals to your friends when they’re all hetero-crazy over Zac Efron (he’s totes cute, so you can agree with them too!)

You’re a girl. You like girls (and maybe even boys sometimes too.) It’s as simple as that and there isn’t a damn thing wrong with it. Own it, girl.

“If a bullet should enter my brain, let that bullet destroy every closet door.”
(Harvey Milk)