Firstly. BIG ANNOUNCEMENT! On June 28th, 2009, the last day of NYC Pride, Autostraddle will be hosting RODEO DISCO, our first kickoff FUN(d)raising party of the century! This festival of girl-0n-girl culture will include sexy cowboys, hot drink specials, a MECHANICAL FREAKIN’ BULL, professional photographers and the most unbeatable DJ lineup ever (really, music you want to listen to! makes such a difference!) – DJ Boom Boom, DJ Carlytron and a special 10pm set from downtown legend DJ LADY STARLIGHT OF LADY GAGA’S STARLIGHT REVUE! 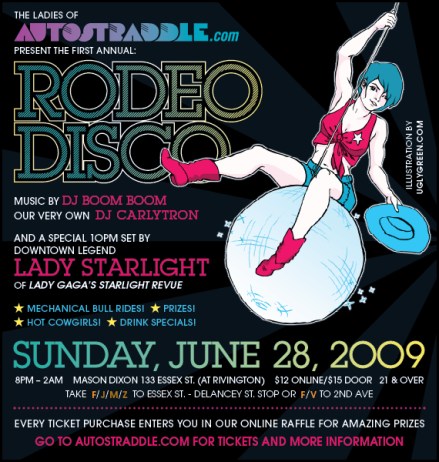 You can get more details here. We do anticipate a sell out, so get your tickets now and BONUS!

Autostraddle Readers you can get your ticket for only $10 for a limited time when you select “autostraddle” and enter discount code COWGIRL.

Not only will you be supporting our ongoing existence but you’ll be going to probs the best party of all time! You can get tickets at the door for $15 on the day of!

AND!  We’re looking for people and businesses who might want to sponsor the party by donating goods or services to our online raffle, which will happen in conjunction with our late June fundraising drive — a mutually beneficial relationship that’ll tickle our heartstrings and all that.

+ If you had to find one thing wrong with gay media, what would it be? I vote for not enough girls in boyshorts. (@queerty)

+ Unpublished photos of Marilyn Monroe have surfaced on what would’ve been her 83rd birthday. (@cnn)

+ OK Seriously I’m sorry this has turned into an Adam Lambert fansite, I promise we’ll stop soon, but this interview is hilarious, this girl Michelle is my new Interview Hero (I am really into how different people conduct/receive interviews, and I love subversive or performance-oriented interviews especially). (@bestweekever) Okay! AND here’s this funny bit, he’s so cute in glasses! (@bestweekever)

+ Sorry if I’m the last one on the boat for this, but Adam Lambert’s US Weekly interview made me almost pee in my pants at 1:19:

+ Here’s a new point — and a good one, too. Wanna talk about rubbing our lifestyle in your face? What about those dudes that come to my DOOR with Bibles? Gays certainly don’t solicit on the streetcorner with poorly designed pamphlets, weirdos: I Don’t Care What You Do in the Privacy of Your Own Home. (@pamshouseblend)

+ I Can Has Feminizm? Exactly what it sounds like: a weekly collection of feminist-themed LOL gifs. (@bitchmagazine)

+The National Gay Rights March in Washington will be held on October 11th, 2009. OMG I am totes going are you going? Meet you at Madame Tussaud’s after LOL! (@gayatheist)

+ Hundreds Attend Launch of Book by Lesbians…in Lebanon! Hundreds of people gathered at Beirut’s Medina Theater on Saturday for the launching of “Bareed Mista3jil,” (or “Mail in a Hurry”), Lebanon’s first ever book about the experiences of gay women and transgendered people. (@LGBTpride)

+ Kelly McGillis: Coming Out as a Lesbian Not Easy. Best known as the woman who made many a male’s heart flutter as the sultry flight instructor in Top Gun, 52-year-old Kelly McGillis comes out in People Magazine: “The idea of being judged just totally freaks me out. Even though I try really hard not to care what people think about me and that really is my little adage, what you think about me is none of my business it does matter, and it is hard. (@people)

+ What the pro-life movement hath wrought:  Abortion Provider Murdered: Dr. George Tiller, an outspoken advocate for abortion rights and one of the few late-term abortion providers in the country, was shot dead in church this morning. This is the first time an abortion provider has been murdered in over a decade. (@feministing)

+ The MTV Movie Awards happened, Twilight won everything, Kristen Stewart dropped her golden popcorn thingie on the floor, Bruno smashed into Eminem, and all the children looked lovely in their outfits with their shiny hair. Ta-da! (@la times)

+ Nevada is now the 17th state to recognize the relationships of gay and lesbian couples under state law. +30

+ Gay Community Bitterly Disappointed by Obama’s Lack of Action: Disappointment [includes] Obama’s inaction on issues that include same-sex marriage and the military’s “don’t ask, don’t tell” policy is turning into outright anger. Obama has had nothing to say about the ruling, something that has stung many in the community who had assumed he might speak out against it and reiterate his commitment to their cause. (@the canadian press) -10

+ SoCal pastor won’t marry anyone ’til gays can marry. He is awesome. He’s also going to get a lot of needlework done and probs experience a sweet return to brunch. (@mercury news) +5

+ While you were busy recycling your “No On Prop 8” posterboard the day after the press-friendly Fresno event, leaders of Gay Inc. were figuring out how to claim your rights in the next battle for equality. Only problem? They tried this closed-door approach before, and it didn’t work. (@queerty) -5

Your Auto-Straddler of the Day:

from Intern Hot Laura:
Fans of FML, eat your heart out.

from Riese:
I have just discovered Loveology, the blog of “Dutch dreamer” Mila, and I am in love with loveology. Photos and drawings and crafty things and design and 500 examples of how wall collages can be done right even by adults. Howevs, music that auto-plays on websites is my number one internet pet peeve (I’m looking at you, myspace!) so if you’re anything like me I will tell you in advance that Loveology’s MixPod widget is on the left sidebar, just press pause, breathe, and enjoy the love.