It is such a novel thing to be yelled at by straight people about TV. Our paths hardly ever cross because I mostly do not write about straight people and also I have a lot of straight phrases muted on Twitter, such as “Ezra Fitz,” “Bellarke,” “boat shoes,” and “love is love.” Also I get confused when straight people yell at me because I often have no idea what in the Eat Pray Love they’re talking about. Like after my first And Just Like That recap yesterday, all these women were like “MEREDITH GREY LOST HER SOUL MATE TOO!” and I was like “What are you even saying? Cristina Yang didn’t die; she just moved away.” But I guess they were talking about Derek Shepherd, so please allow me to apologize and right my wrong.

In addition to Big, another man who died on TV was Derek Shepherd, and how he died was getting his brain operated on while narrating the entire surgery from the ether, talking about what a bunch of idiots these other neurosurgeons were. The only one who could save Derek Shepherd was Derek Shepherd! Which is basically the same thing that happened to Dr. Strange, except for he became a wizard and Derek just became one of the ten thousand ghosts lurking around Seattle Grace Mercy West talking shit about other doctors.

Are you thus appeased, inexplicable straight people reading this recap? 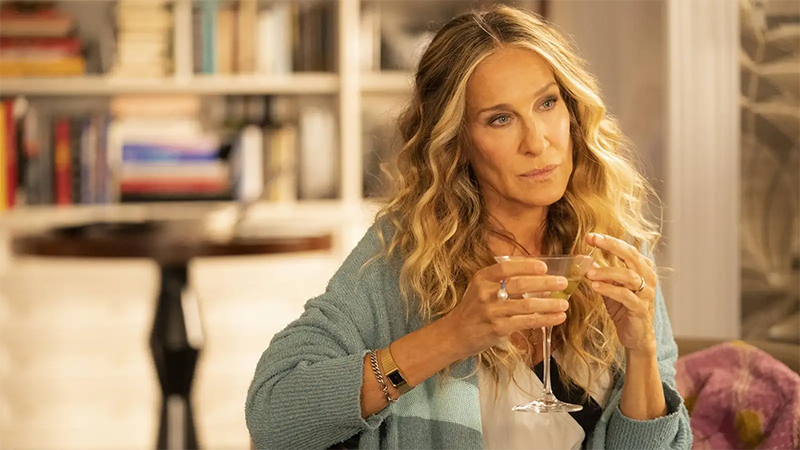 I couldn’t help but wonder: Was anyone on this show actually going to have sex besides a teenage boy?

Anyway, “Little Black Dress” opens right where “Hello It’s Me” leaves off. Big’s still dead and Carrie’s still devastated. She calls Miranda, who comes over — gladly, to be honest; Brady will not stop having loud teenage sex in her house — and holds onto her while the ambulance comes to take Big’s body away. Carrie doesn’t know what she’s going to do, and she means in the immediate and in the long term. Like how do you plan a funeral? And how do you go on with your life when the person you thought you’d spend the rest of it with just dropped dead and is trending on Twitter because he tanked Peleton’s stock?

Both Miranda and Charlotte have some experience with this, Miranda especially due to her mom dying, but Charlotte does the most un-Charlotte thing possible. Wrecked with guilt about how if she hadn’t pressured Carrie into coming to Lily’s recital, Big might still be alive, she keeps saying that! Over and over! It is very weird to see someone on this show besides Carrie Bradshaw making everything all about herself, especially at a time when Carrie Bradshaw definitely deserves to have everything be all about herself. At one point, Carrie actually snaps at her, “Get up and get it together!” Which: Fair.

Another lesson Charlotte has yet to learn is when a good time would be for purse wine! Or like purse Whisky! Or purse Xanax!

You know who would know ALL OF THESE THINGS? Samantha Jones.

Speaking of whomst — Carrie does not want flowers for Big’s funeral and she does not want a funeral at a funeral home, no matter how moving that funeral home’s sizzle reel is. She wants something chill and chic where everyone who knew and loved Big can celebrate him and how he touched their lives. (Maybe I’m misremembering, but did he even know the other characters on this show?) But one beautiful vignette of lilies does arrive. All white. Perfect. The card attached simply says “Love, Samantha” and that’s as close to tears as I got during this whole entire thing. Carrie texts her to say thank you, but Samatha doesn’t text back. 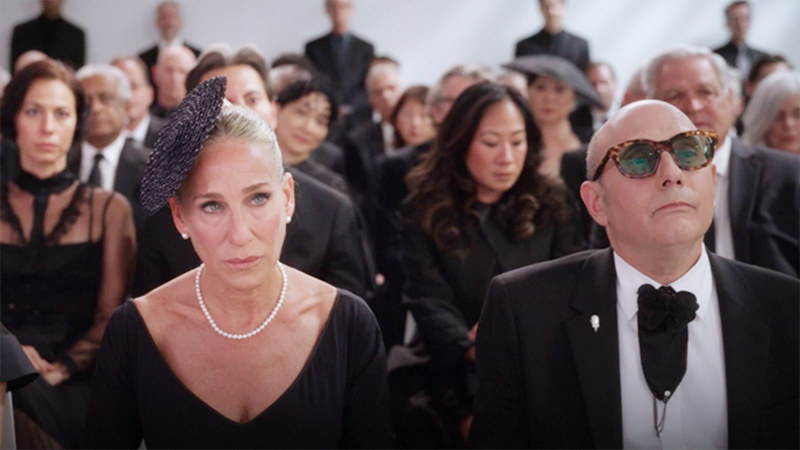 Che is one of the elite who gets an invite to Big’s funeral. They say they’re there because it was someone Carrie loved, and also because people can be jerks on any and all occasions, even somber ones like this, but they used to be a bouncer at a dyke biker bar — “That’s some world class bouncin'” — so they’ll handle any hooligans. This is neither the time nor the place, but damn they look good in an all-black suit. You know who else thinks so? Miranda. She and Che don’t exactly get off on the right foot due to Miranda catching Che giving Brady some weed and FLIPPING OUT, saying the word “fuck” a Bette Porter amount of times, and threatening to rip Che’s head off. Che laughs. Well, smirks. And Miranda wants to know if Che thinks this is funny. Che says no, that actually Miranda is not funny, but in an hour or so, Che could make it funny ’cause being a professional comedian is kinda their thing. (Also being cool as fucking hell is their thing.)

Miranda wants to know who Che even thinks they are! Like seriously! Who! And what! Some kind of “funeral pot pusher” or something! Che says that does, in fact, seem like an untapped market and a lucrative business opportunity and then swaggers right out of there.

About 90 seconds later, Che and Miranda re-meet, when Carrie introduces one as her “podcast boss” and the other as her “ride or die.” 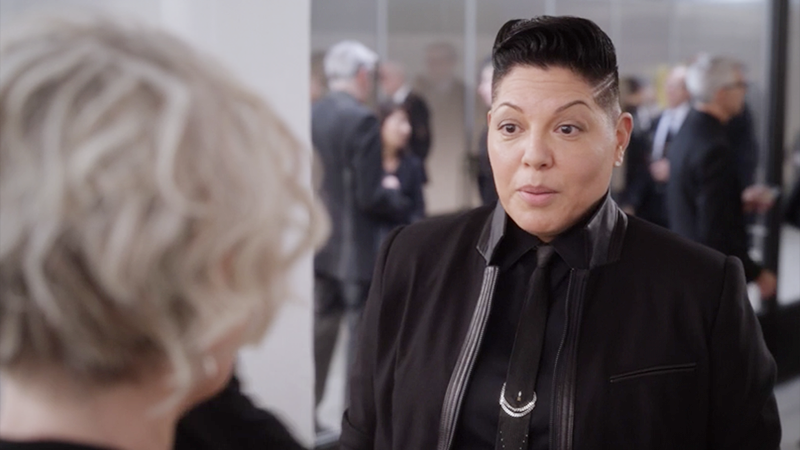 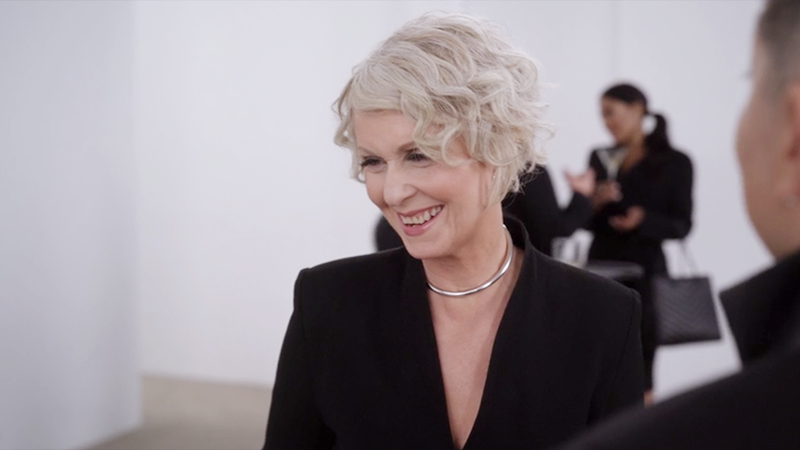 My god I love overachievers.

Miranda wants to apologize, but Che wants to flirt. AND WHOO BOY. Miranda’s like, “Um. Che, right? Like the Marxist revolutionary, or…?” Che smirks again, says, “No, like Cheryl. I dropped the ‘ryl’ because, well, do I seem like a Cheryl to you?” Miranda agrees that they do not seem like a Cheryl. She tries to explain, again, that she’s sorry and sometimes can be like a mama bear. Che legit goes, “Mama bear? Honey, try Papa bear. Like a big daddy silverback.” They make paws with their hands and claw at the air, all RAWR!!! Miranda is already so enamored the camera has to leave the building to contain her swooning. Che says Miranda doesn’t seem like a Miranda. More like a Rambo. And Miranda laughs so loud it echoes throughout the entire funeral museum(?).

I’m gonna be real with you: I took off my hoodie and tossed it across the room during this scene. How does Sara Ramirez keep getting sexier? I think they could win a top-off with every queer in TV history right now, including Callie Torres.

A couple of people make some scenes at the funeral, including Susan Sharon (B-side!), who blurts out “Does anyone else remember what a prick he was to her?” during Big’s In Memoriam film, and then loudly and vehemently tells Carrie afterward that she FORGIVES HER and will be WAITING FOR CARRIE’S APOLOGY as soon as Carrie HAS THE BANDWIDTH. Forgive her for what? Carrie literally had no idea. Also Big’s secretary, who somehow doesn’t get a front row seat at the funeral, starts sobbing very loudly during it, but Che’s got it covered with a monogrammed cotton handkerchief that they pull out of their suit pocket MY GOD.

Big’s ashes arrive soon after the funeral and Carrie doesn’t know what to do with them. Luckily Charlotte also arrives and, once again, tries to make this entire thing about her own guilt. Carrie finally yells at her, and it’s cathartic, and even Charlotte has to agree that she’s acting bananapants and needs to pull it together for her best friend. 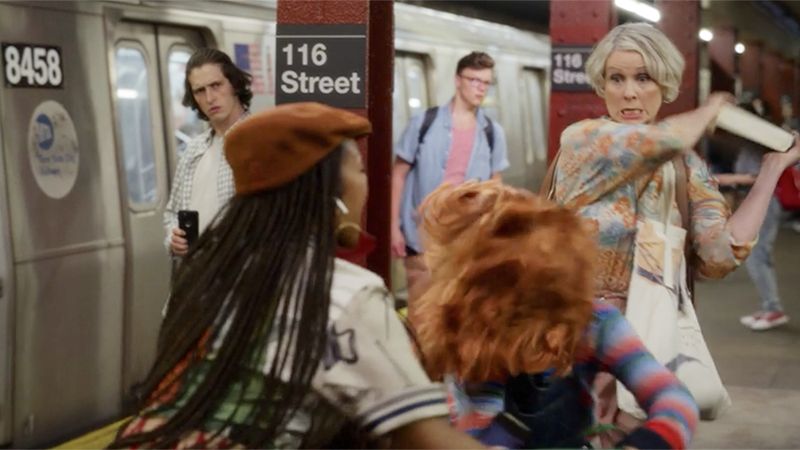 After the funeral, Miranda also flirts with her professor, Dr. Nya Wallace, on the subway platform again. This time after walloping a guy in a Chucky mask over the head with her text book as he tries to steal Nya’s purse. Eleventy bazillion words have been written about how New York City is a main character on this show, but not the New York City I know. Until this scene, where everyone on the subway just watches this happen, including a guy on the phone who’s like, “Yeah hang on, a kid dressed up like a horror doll is doing some shit” and then shakes his head like “Oh this city” when when Miranda smacks him to the ground with her book.

It really is a hell of a town.