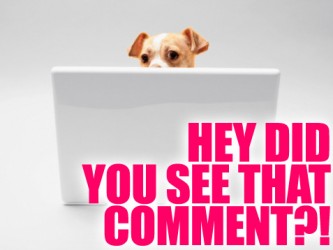 Between the State of the Autostraddle Union #2, Valentine’s Day and the announcement of A-Camp, our little section of the interweb was bursting at the seams with comment love this week.

We got baked V-day style, did a round table about our favorite things and felt optimistic about the future. Artist Attack! introduced us to Gluck, Jean-Michel Basquiat, Ivana, Simone Melteson and the Hide/Seek exhibition. We mourned the loss of Whitney Houston and Katrina brought us The Lifespan of a Lesbian Heartbreak (which may or may not involve Crying to Adele). In honor of Fashion Week, we checked out some hot queer models and the clothes on Pretty Little Liars. We also talked about Facebook going public, freelancing and the many offenses of 2 Broke Girls. Crystal gave us more musical goodness and Rachel told us about gay marriage in NJ, the latest right wing punditry over women in the military and a Virginia school district’s misguided proposal to address gay bullying. Oh yeah, and Brittani made a damn good argument to vote for Autostraddle in the 2012 Bloggies (voting ends on Sunday so get to it!).

The sheer volume of comments this week meant that competition was tough. We hope you know that you are all +1s in our hearts. Here are some of our faves…

On An Especially Special Get Baked: Valentine’s Sweets:

The Sexy Sandwich Award to caitlinmae: “Show of hands, who wants to cut all sandwich bread/baked goods/meal components from now on with Stef’s sex position cookie cutters?”

There was some kick-ass image posting going on this week (Fanta-sea and Rachel Maddow on the moon anyone?), but Sinthe takes the cake and wins the “Ask and Ye Shall Receive” Award:

radiogirl: “ ‘Hello, have you heard of this thing called victim blaming? YOU’RE DOING IT RIGHT NOW.’ ”

Lauren: “I want this statement overlaid on a picture of a cat doing a cute thing.” 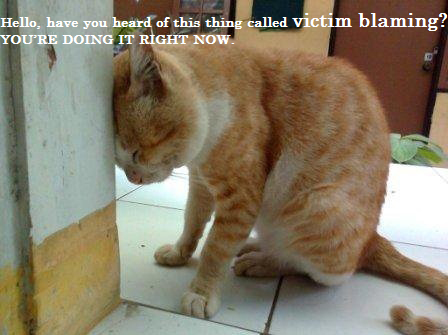 On The Lifespan of a Lesbian Heartbreak:

The How to Deal with a Break-up Award to Mariah: “This describes my current situation exactly, minus the part where I smashed some guys car window for making out with my ex in front of my house. Oops.”

With 700+ comments, the Camp Autostraddle post was chock-full of win this week.

The You’ve Got Mail Award to Elise: “Seriously. I feel like I just got my letter to Hogwarts. Gay camp weekend in the woods is magical enough to make me forget the owl is here eight years late.”

The “Real Talk” Award to seemsforever: “oh man, i kind of wanna smack all of you who are like ‘oh no! i’m in [insert US state here] it’s too farrrrrr’ WHAT ARE YOU SERIOUS this is CAMP AUTOSTRADDLE! you’re in the correct nation! you’re on the correct side of the world! go do that effin’ thing! intense frustration at living on the asshole of the world is makin’ me a bit crazy. i’m sorry. BUT SERIOUSLY.”

The Let’s Get Down to Business Award to wasteunit: “Does anyone know of a bulk discount for dental dams?”

The Unicorn Plan-It Award to Launa: “ [in reply to Haviland] Are you going to lead the camp in morning yoga MobileOm style?”