At least part of me still believes that when I graduate from my small, private, acclaimed university in May I will be gainfully employed, or that at least one day I won’t feel like I live at the bottom of the food pyramid called “capitalism.” Recently, though, many, many, many things have shown me that I might be wrong about that.

A recent Pew Research Center report entitled “Young, Underemployed and Optimistic,” which may or may not sound like the title of your memoir, outlined the worrying impact of our bad economy on young people, and concluded that we’re more sure than ever of our futures and our dreams at the same time. In order to find that out, they interviewed  2,048 people 18 or older in the continental United States by telephone. So it turns out that for at least those 2,048 people, the present is bleak, the future is bleak, and we’re crossing our fingers.

The Present is Bleak

Tough economic times are having a drastic effect on the lives of young people. The Pew survey found that to cope with the whole “rich get richer, poor get poorer, only now everyone gets poorer” thing, that young people have had to go back to school, move back in with their parents, postpone children, or postpone marriage. In essence, adulthood is what’s actually being postponed: today less parents feel their children should be financially independent by 22, and the rising age of expected “adulthood” is now at 25. 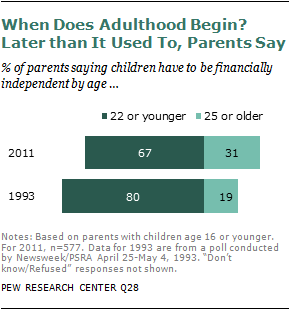 41 percent of respondents overall pinpointed young people as hurting the most in the recession. And 49 percent of young people believe that to be true. But simultaneously, only 9 percent of adults 18 to 34 years old feel like they’re never going to make it. And in fact, over 30 percent believe they already have — or are well on their way — to making as much money as they need to live the lives of their dreams:

Among those ages 18 to 34, nearly nine-in-ten (88%) say they either have or earn enough money now or expect they will in the future. Only 9% say they don’t think they will ever have enough to live the life they want. Adults ages 35 and older are much less optimistic — 28% say they don’t anticipate making enough money in the future.2 While young people are less likely now than they were before the recession to say they currently have enough income, their level of optimism is undiminished from where it was in 2004. 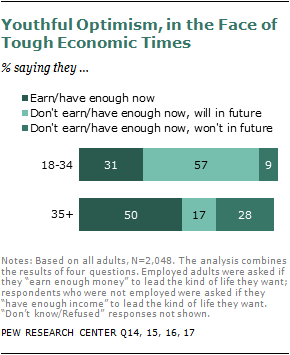 The rising age of adulthood may be what’s key to young people’s optimism. Because ideas in the United States about what is “normal” for young adults are changing, in part as a response to the economic reality, young people themselves feel less pressure and feel as if they have more time to establish themselves in this world. That way, nobody feels bad: parents can blame the recession, their children can blame the recession as they move in with their parents for the third time, and we can all hold each other.

And it looks like the holding may be key, since times are horrible. 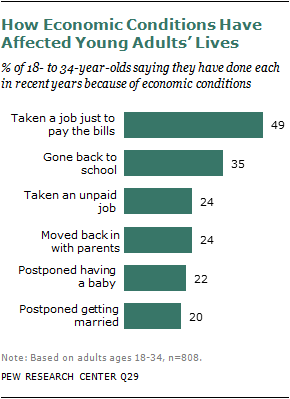 The Future is Also Bleak

The current job market doesn’t give a lot of lasting hope for people 18 to 34. We all know the sound bytes: unemployment on the rise! Weekly wages falling! Even graduates of Harvard Business School can’t get jobs at Chipotle!

Turns out they’re kind of true. For people entering the job market, finding a job is a must at all costs, and it’s a huge challenge. Someone once told me this is the first generation where going to college doesn’t guarantee you anything, which might be why most 18 to 34 year-old people surveyed said they have jobs they don’t consider part of their career. And anyone looking for a job with 5 internships and a babysitting job on their resumé right now probably already knows there aren’t a lot of young people in any office right now. 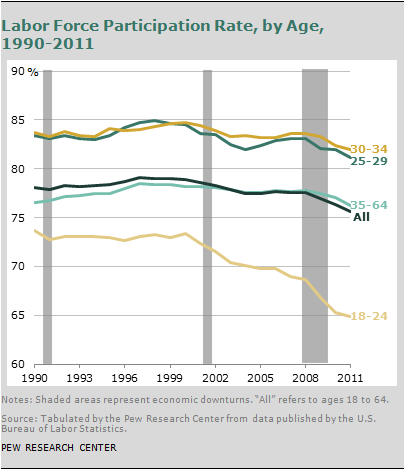 And also, a big surprise relevant to your life: did you know everything is still even harder for women? It is: 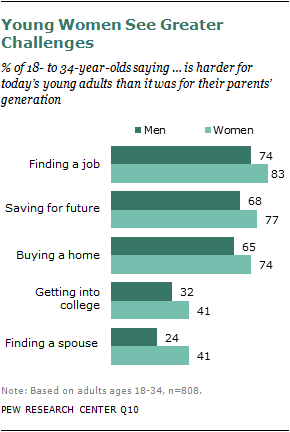 The lasting impacts of the recession are kind of ruining our lives — right now. Only time will tell whether our need to work at a burger joint from ages 22 to 24 while hanging up our diplomas in our mother’s basements will have a lasting impact on our lives. I mean, for all we know employers will actually forgive us for our strange job histories because of these strange times, and when jobs are all available they will give them to us using t-shirt guns.

But right now, young people are kind of unhappy. We’re not as pleased with anything as the generation before: housing, education, family, or really, life in general. The Pew data reveals that we are actually incredibly aware of our situation, and that we’re doing all we can to work with what we’ve been given, and that maybe the optimism is all we have left. 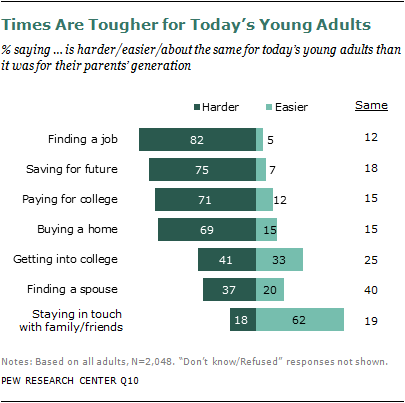 Right now the optimism of people ages 18 to 34 in America is astounding, for sure. Whether we’re employed or unemployed, whether we’re doing okay or not, across the board we believe that one day we will be. It’s a hope backed up by big numbers of us, too. We’re all sitting around in our janky apartments, or in our parents’ basements a la That ’70s Show into our mid-twenties, lighting candles and incense and dreaming about the day we can stop eating white bread with peanut butter for every meal.

We’re gonna make it. We know it. 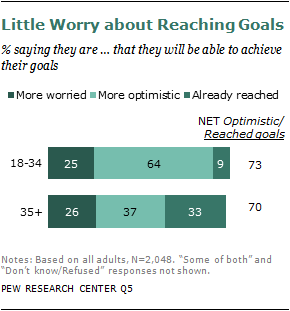 We’re also confident that our children will do better than us, and if the person surveyed was a woman or a minority, they were even more likely to feel that way. College grads, though, appear slightly disillusioned compared to their non-college-attending peers, and don’t feel quite as hopeful about their kids having better futures than they do.

It’s all relative, though – relative to how we define success, happiness, and the word “goals.” 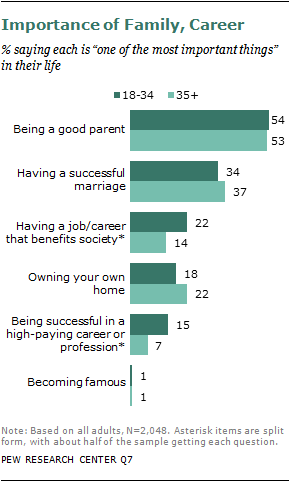 If your goal is a happy family, you’re probably more hopeful than me. (I fit in the 1% there where it says “famous.”) And for 18-24-year-olds surveyed, a powerful career is more important than being the Brady Bunch. And we’re kind of feeling okay about the opportunity to advance, to thrive, and to eventually find great success in an eventual career. And plus, only 2 out of 10 surveyed aren’t comfortable with the idea that they could find another job, or find the right one eventually. 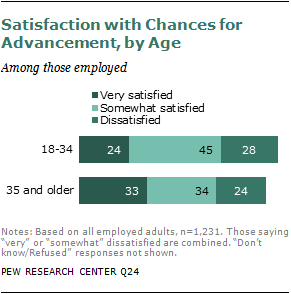 All in all,  it seems like this bad economy could be setting us back for a while, but we’re still right here waiting for something better to come:

Considering that a young person’s early employment history (or lack thereof) has a major impact on her earning power in the future, many Millennials may indeed never make enough money to be comfortable. It’s possible that we, especially those of us who were educated and groomed for the job market, refuse to see the recession as anything more than a phase. “We’re weathering a storm,” we tell ourselves. This era of unemployment, crippling debt, and low-wage drudgery will soon be over.

The optimism, though, of my generation that came through in this survey didn’t necessarily strike me as surprising. It’s easy to believe right now. I have often been described as “optimistic,” “hopeful,” “deliriously happy,” and also “stupid.” Mostly that’s because I believe, without any reason, that I will one day reach the highest of the highs I’ve dreamt of in my mere 21 years of life. Growing up, I, like many other people in my generation, were told that if we wanted something, we could have it. I knew that if I did what I needed to do, I’d get what I wanted. If I get to 30 and I’m not where I thought I’d be at 30 I will probably have some sort of crisis where I try to buy a convertible, then cry about how I can’t afford a convertible. I might also cry about how I don’t have a driver’s license.

But right now, I sit around thinking, “It’s okay that there are crumbs on the floor and all the candles are completely burnt down to the wick and the television doesn’t work and my only decorations are empty alcohol bottles. I have a lot of growing up to do.” And it’s easy to sit around and look at catalogues and read books and dream about wearing really nice clothing and finally buying my Marc Jacobs wardrobe. Because right now, I’m 21 and nothing is certain. For God’s sake, I still don’t even know if I passed the English Comprehension Exam I took last weekend. But I have time to figure it out. And that alone keeps me hopeful.