The national focus on the repeal of DADT helped make us more aware as a nation that there’s still plenty of inequality within the ranks of the military of this bastion of democracy, home of the free. For instance, the fact that even within DADT, black women tended to be very disproportionately affected, or that trans people’s rights to serve aren’t protected, or that even after the repeal of DADT, the partners and spouses of queer servicemembers still weren’t eligible for the same rights as those of straight people’s partners. And lest we forget, both before and during and after DADT, women of all sexual orientations have always occupied a different and unequal space in the military — a fact that we were all reminded of this week when a Fox News commentator suggested that instead of demanding a solution to the hugely disproportionate amount of sexual harassment and assault they experience, women in the military should “expect to get raped”, and Rick Santorum’s opposition to opening up any combat positions to women because they have “emotions.” 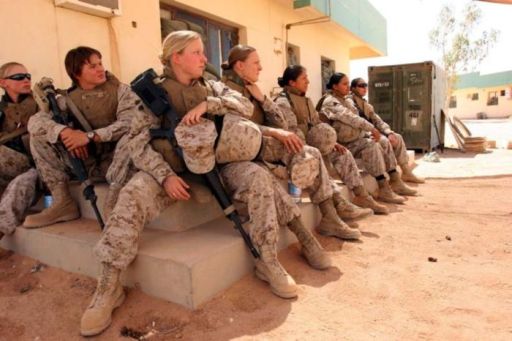 While Fox commentator Liz Trotta and Rick Santorum’s comments are both shockingly problematic, Santorum’s are perhaps not uncommon in the general populace. In the same way that you often hear people profess that the gendered wage gap is a natural result of the fact that “women like caring professions, like being a nurse, while men are more drawn to higher-paying jobs,” there are plenty of people who think that however sincere a woman’s desire to serve her country, she’s crippled by emotional reactions that are so strong they hinder the decisionmaking skills and putting training into action that combat requires. Santorum helpfully observed that “men have emotions when you see a woman in harm’s way,” which aside from being paternalistic and grammatically incorrect, implies that not only can women not do their jobs well, but they also actively prevent others from doing their jobs well.

Of course, the actual evidence contradicts Santorum’s view — as the Washington Post observes, even Newt Gingrich thinks he’s wrong, which is saying something. Although new combat positions are indeed being opened up to women for the first time, it’s not a decision the military took lightly; it comes after a comprehensive review in which it was decided that female servicemembers’ talents were in fact good fits for the positions at hand, and believe it or not, they were competent employees. It’s also worth noting that women already perform many of these more dangerous duties:

In actual practice, however, women already serve in many of those jobs, but as temporary “attachments” to battalions — a bureaucratic sidestep that has been necessary with the high demand for troops during the last decade of war in Iraq and Afghanistan. The Pentagon’s new rules largely formalize existing arrangements and in many ways are simply catching up with realities on the battlefield.

Trotta’s comments on sexual assault are horrying, and a closer look at her words reveals that she’s not just misguided about women in the military, but coming from a deeply misogynistic place of rape apologism in the first place. She complains, for instance, that the issue is being brought up by feminists who complain that women in the military are being “raped too much” — the implication that there is some other level at which women could experience rape that is somehow acceptable is nauseating. When confronted with the fact that the DoD reported sexual assault on women increasing by 64% over the last six years, she responded with “Now, what did they expect? These people are in close contact.”

While Santorum assumes that women are completely without emotional control and can’t make sound decisions when influenced by feeling (although of course each of us does that on a daily basis, and anyone with children has to make heart-stopping decisions while experiencing strong emotions constantly), Trotta assumes that men are completely without the capacity for decisionmaking when it comes to violence — that rape is a natural consequence of men and women interacting, especially if the men are under stress or pressure. Both are equally unfair depictions of an entire gender, and both completely dehumanize everyone involved. Santorum’s emphasis on women’s emotional response to war completely ignores that of course men have one too; war is a deeply traumatizing experience, and to pretend women can’t do their job because they have human feelings implies that men are good at their job because they are somehow without the capacity for human feeling,  which is deeply disrespectful of the experience that both male and female servicemembers have in combat. Liz Trotta simultaneously tells us that women don’t deserve legal protection or the right to their own bodies (or somehow no longer deserve those rights because they’ve done something very brave in trying to serve their country?) and that men can’t be expected to maintain basic levels of respect for their fellow human or restrain themselves from the monstrous violence that’s inherent to them, which seems like a terribly unfair depiction of our armed forces.

The more inequity we become aware of in the armed forces, the clearer it becomes that it’s virtually always harmful to our servicemembers. Often overseas, cut off from family and loved ones, and bearing the brunt of criticism of military decisions made by their superiors, every internal injustice they’re made to suffer makes their lives harder and our military as a whole weaker. If the ‘debate’ on women in the military’s competence (science generally backs the idea that women who undergo intensive training are capable of strenuous combat work, at least at levels comparable to men) shows us anything, it’s that women don’t earn respect for their abilities no matter what those abilities are, even when they’re willing to put their lives on the line. If Santorum is looking to bring something new to the GOP candidacy, this isn’t it.