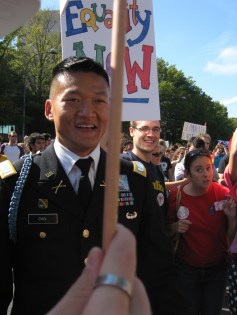 DAN CHOI: Queerty reports that our BFF Dan Choi has been called back to service:

Los Angeles-based photographer Jeff Sheng, who shot Choi for a photo series (and took this picture), spoke with the lieutenant to find out what the deal is. He relays: “Apparently, Lt. Choi’s commander has always been in full support of him, and even after Lt. Choi came out on The Rachel Maddow Show, his commander did not press for his discharge. The military did eventually serve Lt. Choi a discharge notification – essentially firing him from his job, but he was allowed to fight this at trial, and as it currently stands, the discharge has not been finalized. Given the current state of how DADT is in such flux, and also, in my opinion, the prominence and celebrity of Lt. Choi, his discharge might never be fully enforced.”

Well! This is, without question, a significant development in the DADT battle. Choi is arguably the most public face of the policy, and his name is well known to Pentagon officials and White House advisers; even President Obama would recognize his face. And that there’s been no top-down effort to keep him from serving — no “let’s wait and see” approach from publicity-minded military leaders above Choi’s commander — is indeed a nod toward Obama’s push to repeal the law.

Wow! Don’t you almost feel like you just got your job back? We’ve been following Dan since Day One — btw, did you know he’s only 28? So he’s very close in age to most of us — his personal, social and political evolution since that fated moment when he came out on The Rachel Maddow Show. Although we’ll miss his impassioned speeches and charming personality, it’s f*cking awesome that he’s going back to work! Yay Dan! Go linguist it up!

After last week’s hearing, we caught up with Lissa Young, the DADT discharge Natalie interviewed for Autostraddle back in September, to see what she thought about last week’s announcement. As you may recall we felt the discussion on DADT was dominated by male voices. Lissa, another member of Knights Out, who was discharged from the military after 16 years of active duty.

I watched the entire senate armed services committee hearing, and was stunned to hear Admiral Mullen make a statement that queer activists and loyalists have been saying for 50 years. This policy raises issues of integrity by forcing gay soldiers to lie about who they are! That moment was both exhilarating and infuriating. Exhilarating, because it marks the beginning of the end of an era, and it is the Chairman of the Joint Chiefs of Staff (Mullen) who has to take the lead in making any change – and now he’s finally done so. Infuriating, because somehow queer equality is validated and more palatable when it comes out of an “official’s” mouth.

As far as Gates maintaining that this had to be “studied” for a longer period of time – that is a stall tactic if I’ve ever seen one. The issue doesn’t need to be studied. The forces simply need to do exactly what they did for African Americans, and just eliminate discriminatory policies. The issues raised are utterly irrelevant, and spring from the deep seeded fears of straight men — that they will become the objectified prey of gay men. I see Gates honoring that fear by saying “We must take a year and study these issues thoroughly”. If you’re a human being, then you already know everything you need to know about how to integrate straight and gay people. Again, these were the same stall tactics used by the forces when we were trying to integrate African Americans. Men were all up in arms about having to shower and sleep near black men. So, I say “drive on” and everything will work itself out.

The issue is really and truly about command climate. If the leadership leads, and ensures their units have healthy climates, then there won’t be any issues with either straight or gay men being afraid. As a matter of fact, a healthy, well run organization creates cohesion and camaraderie, not fear and distrust. 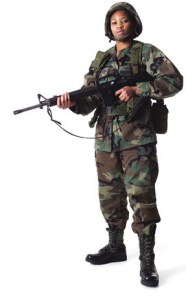 One thing that hasn’t been discussed enough about the recent report on DADT discharges: “Don’t Ask, Don’t Tell” has been used to kick Black women out of the military at a much higher rate than other groups. In fact, Black women are discharged under “Don’t Ask, Don’t Tell” at three times the rate that they serve in the military. Although Black women make up less than one percent of servicemembers, they comprise 3.3% of those discharged under the policy.” [On a more optimistic note, blisted celebrates last week’s announcement that Colin Powell is coming out against Don’t Ask Don’t Tell, in opposition to his previously stated position on the matter.]

The Colorlines article also links to a 2004 Task Force report you may already be familiar with which pointed out, in line with the gaping gulfs of inequality that have yet to be rectified or fully addressed in this country, that anti-gay marriage amendments will negatively affect black same-sex couples [more than white same-sex couples] because they are more likely to work in the public sector, relying on domestic partner health insurance, and serve in the military, where they could lose income and benefits for serving openly. Furthermore, Black same-sex couples have more to gain from legal recognition of their relationships and more to lose when states pass amendments banning marriage and other forms of partner recognition.

Andrew Sullivan at The Atlantic, in response to Rich Lowry’s debate with Anna Marie Cox:

“Rich says that it’s no big deal to live hiding one’s sexual orientation. If you’re straight, try it for one day. Try never mentioning your spouse, your family, your home, your girlfriend or boyfriend to anyone you know or work with – just for one day. Take that photo off your desk at work, change the pronoun you use for your spouse to the opposite gender, guard everything you might say or do so that no one could know you’re straight, shut the door in your office if you have a personal conversation if it might come up.” (you should read the whole thing)

The Wall Street Journal has a middle-of-the-road analysis of repealing Don’t Ask Don’t Tell. I, for one, am encouraged by his conclusion: DADT is a non-issue. He cites anecdotal evidence from countries (like Israel!) that have already allowed gays in their armed forces. I wonder, once again, why the US military can’t just use data from other countries for their study, but I guess they know more about the logistics than me.

HATERS WANNA HATE: Gay rights groups say the bill singles out gay students for harassment Your parents are getting married so now we’re going to have to make sure no one else grows up gay and gets married:“Two Iowa legislators are getting heat from the gay community. The lawmakers want to remove protection to lesbians, gay and transgender students from the Safe Schools Law, in and effort to reverse the Iowa’s Supreme Court decision to legalize same-sex marriage.” (@wheotv)

WALKER: We told you about Judge Walker, of Prop 8 trial fame, being gay. Turns out there’s even more to his story, including the fact that he was almost not confirmed as a judge because he was seen as anti-gay, which is debatable. The San Francisco Chronicle makes a good point: “Today, at age 65, Judge Walker is presiding over the challenge to Proposition 8, which may well determine how quickly gays and lesbians achieve full marriage equality in this country. We now know what Walker never bothered to reveal when he was being castigated as anti-gay: He is gay, which changes neither his legal history nor his fitness for this assignment.” (@sfchronicle)

IOWA: Iowans continue to be awesome! A new poll shows that a majority of the state doesn’t think the legislature needs to discuss gay marriage this year. They’re just fine, thanks! (@iowaregister)

GRAVY TRAIN: The largest gay rights group in New Jersey has asked members to stop donating to the major political parties in reaction to their disappointment with the gay marriage vote earlier this year.

Garden State Equality Chairman Steven Goldstein said the decision to stop donations was made to tell political parties they can’t take for granted the support of the state’s gays and their allies.

“No political party has a record good enough on LGBT civil rights that it can rightfully claim to be entitled to our money on a party-wide basis,” said Goldstein. “No longer will we let any political party take our money and volunteers with one hand, and slap us in the face with the other when we seek full equality.” (@njstar-ledger)

RHODE ISLAND: Three of the candidates for Rhode Island governor have pledged to sign a gay marriage bill if it were to cross their desks after a gay rights group posed the question to the field. The Republican candidates have not responded, surprisingly enough. (@bostonherald)

SWEET VIRGINIA: The Virginia Senate voted through a bill barring discrimination based on sexual orientation in government positions. It probably won’t have as much luck in the conservative House. (@washingtonexaminer)