DADT: We were cautiously hopeful after Obama’s mention of DADT in the State of the Union last week, but it looks like he’s super serious. Defense Secretary Robert Gates announced today that the military would take a more lenient approach on enforcing DADT while the Pentagon takes a year to study what it’s like to have gays in the units. Oh hey, lemme tell you what it’s like: totes not a big deal, bro. There I just saved you a whole year! You can probs catch up on a bunch of reading now. Or like, defending the country or something!

Ideally, this could just be like when your Mom says she wants you to consider other options like nice girls and actual boys before you marry your Wiccan Girlfriend and you say fine fine you will (even though you’ve already made up your mind) and then you just go on with your life and after a few weeks tell your Mom that you dated all these boys and you’re totally sure now that Wiccisha is the one just to appease her. You know what I mean? 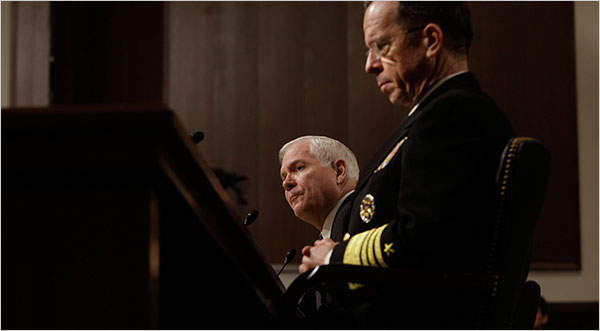 While Jeh C. Johnson, the Pentagon’s top legal counsel, and Gen. Carter F. Ham, the commander of the US Army in Europe, are conducting the study, the “fairer” enforcement will likely include no longer taking action to discharge service members who were outed by third parties or jilted partners, “one of the most onerous aspects of the law.”

Mr. Gates said he had asked the Pentagon to make a recommendation on the matter within 45 days, but “we believe that we have a degree of latitude within the existing law to change our internal procedures in a manner that is more appropriate and fair to our men and women in uniform.”

The hearing opened with a statement from Senator Carl Levin of Michigan pushing for the repeal of the law and John McCain of Arizona. You know, John McCain? He had a show on FoxNews and MSNBC in 2008. Yeah he says that he’s “deeply disappointed” and that the original rationale is “sound as ever.” Remind me again why liberals are supposed to like this guy?

On one thing, they agreed: many gay men and lesbians are serving honorably and effectively in the military today, despite a policy that has driven thousands of others out of the services. Mr. Levin said the military should act in this matter as it has in others, as a force against discrimination. And Mr. McCain said the military culture was so different from civilian life that the rules for its members, too, must differ.

Mr. Levin cited an overwhelming view on the part of the public, as seen in polls, that the law should change. Mr. McCain said that a thousand retired admirals and generals had signed a petition against change, and that their views reflected the honest beliefs of military leaders as a whole, whatever Admiral Mullen’s personal view.

This all follows a bunch of meetings with Obama and his generals, says The New York Times. They include this paragraph, which seems like a “no duh” moment to me:

But it was in Oval Office strategy sessions to review court cases challenging the ban — ones that could reach the Supreme Court — that Mr. Obama faced the fact that if he did not change the policy, his administration would be forced to defend publicly the constitutionality of a law he had long opposed.

Hasn’t the gay community been saying this for a year? But hey, he’s finally moving on this for real, so perhaps we should drop the criticism for now and say THANK YOU SIR. (@nyt) 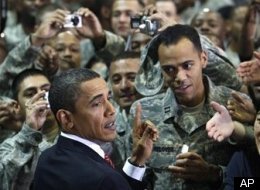 Anyway, in these meetings in the White House, most people have agreed that any action on DADT should come through Congress, not an executive order. The only legislation currently on the books that would repeal the act comes from a Democrat Patrick Murphy, an Iraq veteran. “His bill has 187 co-sponsors, leaving it just 31 votes short of the 218 needed to ensure passage.” A Missouri representative who’s head of the Armed Services Committee is trying to slow down the bill, but he’s not from my district, so don’t blame me! Looks like it’ll have to wait a year not matter what. (@wsj)

And if you were wondering how much that pause in DADT enforcement will matter, the numbers are finally out for how many DADT discharges happened in 2009. There were 428 discharges last year, down from 619 in 2008. Those figures are usually up and down from year to year, so this drop isn’t exactly significant. (@latimes)

SCOTT BROWN: No matter what you think of Scott Brown, his election has no doubt thrown a bit of a monkey wrench into the Democrats’ plans. How much his presence will affect the equality movement remains unclear. He sat down with Barbara Walters recently to talk about his views on a lot of stuff, including gay marriage and DADT. Go to 2:50 for the good stuff.

He falls in line with Obama on marriage, apparently. Both Queerty and I have mixed feelings on this guy. He seems kind of moderate on some issues and like he understand the complexities of these things. But he isn’t cool with gay people and has opposed gay marriage in Massachusetts (though not the state’s right to allow it).

I mean, I can respect that he’s a real small-government Republican, as opposed to the Republicans that are for small government until it means conceding on a social issue. Maybe his belief in state’s rights could help us in the long run (*cough*DOMA*cough*). There could be some nuance to his positions, as The Boston Edge puts it.

POPE: The Pope chided Britain for infringing on freedom of religion by not allowing Catholic adoption agencies to discriminate against gay couples. How nice. (@rawstory)

UTAH: Democrats in Utah have put an anti-discrimination bill on hold until 2011, despite some actual public support. It looks like the move is the result of a political stand off, and it was done “as a “compromise” to block anti-gay legislation.” (@sltrib)

SUPER BOWL: And the plot thickens for CBS and the mess they’ve gotten into over Super Bowl ads. Now they’ve rejected a GoDaddy.com ad. The website’s ads get turned down almost every year for raunchiness, banking on the extra press that ManCrunch.com is currently enjoying. But apparently this year’s ad was tamer, but SURPRISE, it had a gay subtext. And now even more people are crying foul at CBS. Man, I would not want to be in charge of their PR this week. (@latimes)

There’s still plenty of controversy over the Tim Tebow ad for radical conservative group Focus on the Family. Amplify Your Voice has started a campaign asking people to tell CBS that the Super Bowl is no place for politics or culture wars. (@amplifyyourvoice)

Mosaic, a 3,000-member megachurch, has found a way around CBS entirely. The church is in the finals to win a spot during the big game courtesy of Doritos. The ad tries to take a lighter approach to show that “you can be a person of faith and really enjoy life and laugh.” (@cbsnews)