The past few months have seen greater legislative change than virtually ever before for gay families, maybe most notably with the repeal of Don’t Ask Don’t Tell and the government’s refusal to defend DOMA in court. There’s little doubt that we’re at least limping towards equality. But “equality” — or at least the working version of it — isn’t always particularly equal, which people who haven’t had to fight for it don’t always understand. The letter of the law doesn’t guarantee the spirit, and sometimes even the letter of the law isn’t even saying much. For all its history of grudging progress on rights for marginalized groups, there area  lot of parts of redistributing privilege that America doesn’t quite have down.

For instance, ask a partner of a gay or lesbian member of the US military how it feels to be finally treated equally. It’s a tough question, because despite the repeal of DADT, they actually aren’t. Despite a ten-month review and seemingly eternal hemming and hawing from the Pentagon about being careful that all the necessary infrastructure was in place for a repeal, the partners of queer servicemembers aren’t provided the same benefits as those of straight people; their families aren’t recognized by the military.

Morgan, a lesbian who returned from a deployment in Kuwait in August, said her partner is barred from the family support services, healthcare coverage and housing provided to non-gay spouses of service members. She can’t even shop at the base commissary. 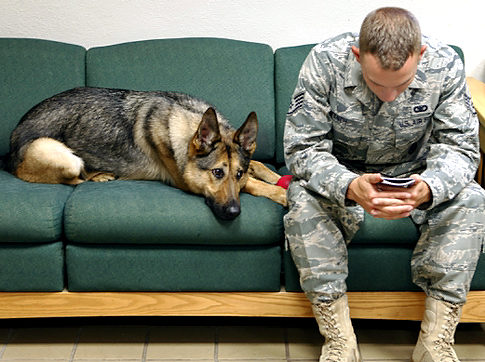 It’s not entirely clear what steps are being taken to update and remedy this situation. It seems to be generally agreed upon that this will be fixed somehow, by someone, at some point. The details are still pretty hazy, though.

[Capt. Scott Johnston, head of the Naval Center Combat and Operational Stress Control unit in San Diego] is optimistic that the military will find a way to address the inequity, just as it did when African Americans and women were integrated into the ranks. In the meantime, he said, the partners of gay men and lesbians in the military must rely on private or community resources for counseling and other mental health needs.

In the meantime, it’s noted that the inequity contributes to problems like PTSD for gay troops; Capt. Johnston himself says that “family and relationship problems on the home front are a greater cause of post-traumatic stress disorder… than exposure to combat.” It seems, then, like the kind of problem someone might want to address sooner rather than later.

The situation with DADT is fairly reminiscent of the reality of DOMA; even in states where couples can legally marry, the lack of federal recognition means that there are still endless legal and financial problems inherent even in the most stable and committed relationships that, on the whole, straight couples get to avoid. For instance, activism has won us enough progress that a lesbian couple can now be married and send their child to a college with a crushingly high tuition, just like everyone else in America. How will their weird pseudo-legally-married status affect financial aid? Well, it depends. The NYT has a helpful breakdown explaining that based on where they fall on a complicated matrix of legal union/specific legal status as parents, the answer is very different. If there’s only one biological parent, it’s possible that only one parent’s income will be counted, making the expected family contribution lower. However, by the same token, it’s possible that people who are in reality financial dependents might not be counted, because they’re not “really” family, making the EFC significantly higher than it should be. Financial aid and being able to afford college feels like a crapshoot for most families, and it would be great if arbitrary legal decisions (that are no longer even supported by the Department of Justice) could at least be taken off the table.

And that’s not even including the dozens of hurtful social inequalities are aren’t wiped away by any legal protections. Bernadette Walsh’s five-year-old daughter Noa was required to make a Father’s Day card in her classroom, even though she has two mothers. “Adding to the Father’s Day stress for the Walsh family is the annual Father’s Day breakfast, which Ms Walsh attends with Noa despite finding it ”very awkward”. ‘My daughter looked at the invitation [to the breakfast] and asked her teacher, ‘Can I come to this?’,” Ms Walsh said.” (Sidenote, this also seems unnecessarily cruel to kids who don’t have a dad because he’s dead or not around, and generally unwelcoming to any kind of non-traditional family.) The Walshes and others have formed a task force to combat heterosexism in schools, and help their children feel like their families are reflected in their curriculum. Will there ever come a point where they don’t have to take the initiative to do it themselves, because equality is the norm? It may be a while before we find out.