8. The Ladies of Sister Spit – Revival of the Year 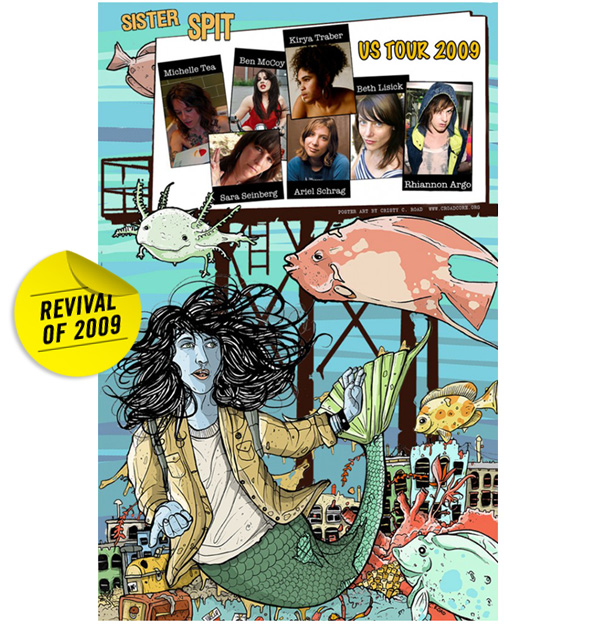 Michelle Tea and Sini Anderson started Sister Spit in 1994 as an answer to San Francisco’s testosterone-heavy open mic nights. The Sister Spit Ramblin’ Road Show began in 1997 when most of Team Autostraddle was still in high school and therefore unable to attend any shows. Luckily for us and you and The World, Tea decided that Fall 2009 was the perfect time to bring spoken-word back to the masses with Sister Spit: The Next Generation.

2010: The girls will get back to it with a new lineup starring Michelle Tea, Lynn Breedove, Nicole J.Georges, Lenelle Moise, Elisha Lim, Len Plass & Annie Danger (and other yet-unannounced guests), kicking off Thursday, April 8th in San Francisco. 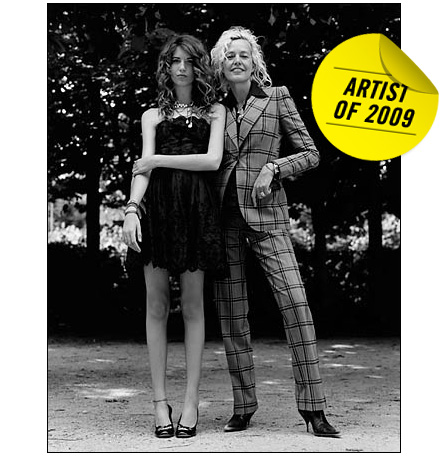 Do you know who Ellen Von Unwerth is? You should, ’cause she’s responsible for 50% of your most favorite photos ever — especially the genderqueer & lesbionic ones, like the smokin’ hot Jenny Shimizu shoot immortalized in her book Couples. She’s also the favorite photographer of our photographer, Robin! 2009 brought a new book, gallery shows, and some of your favorite photoshoots of the year; Lady Gaga on the cover of OUT magazine, Lindsay Lohan’s “Car Crash Couture,” and of course the Whip It! cast’s Hot Skates for V Magazine featuring the best Autostraddle of all time.

Here’s a gallery of some of Unwerth’s homosexiest work of the year: 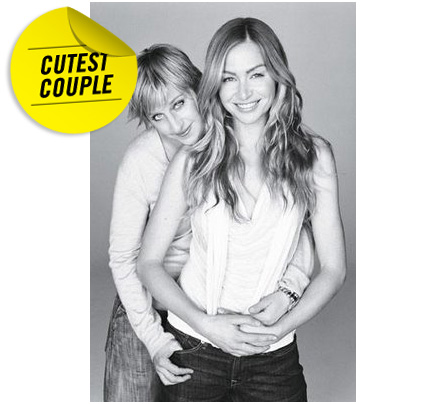 We couldn’t ask for a better representation of lesbian relationships — and on top of it these ladies are both super-smart, talented, and successful. We’ve thought Ellen was funny since like the 90s, and Portia was kickass since like Ally McBeal, and really every day waking up and seeing they’re actually girlfriends feels like a dream come true, it must be REALLY exciting for them! If they break up we will probably quit life. This year they let Americans inside their home & relationship via Ellen’s Show and put an ADORABLE face to the same-sex marriage fight.

2010: The Ellen Show will go on and Ellen will also be joining the American Idol judging panel, premiering on January 12th. In addition to her role in Better Off Ted, Portia De Rossi will be working on the Arrested Development movie. 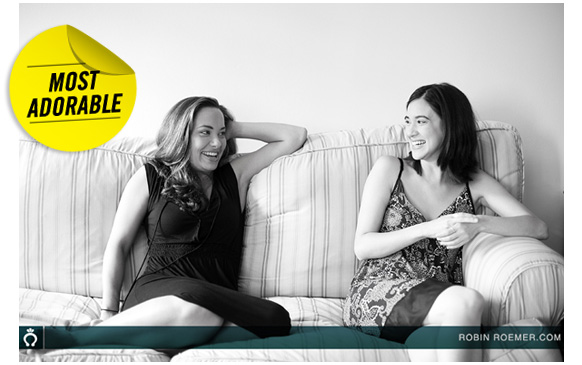 Rachel (straight & engaged!) and Nicole (bisexual) are adorable, genuine, hopeful, and actual friends in the cutest geeky-ist way ever. On Anyone But Me, this ease translates into an on-screen lesbian relationship that really rings true, if often awkward. Their chemistry gives the show an emotional & hilarious kick that keeps viewers coming back for more.

But I know what you’re asking yourself — WHAT IS A CRITTER, AUTOSTRADDLE? What does it mean for these ladies to be referred to as the highest honor in the land, CRITTERS OF THE YEAR? Let us explain, as a Top 100 Critters of the Century list is surely around the corner.

* Critter: A critter is someone who does things that normal people do in a way cuter than the average person. It can be used as a noun, adjective, or a greeting. Examples of critter behavior are as follows: being super cute and fun all the time, not causing drama, wearing hoodies that make you want to cuddle no matter what your relationship is, a stranger being super nice for no reason for no personal benefit for themselves, making the best out of awful situations, always being up for anything.

Critter is totally not a sexual term at all, although obvs we’ve probs all had sex with critters, it is by no means a qualification for the term.

2010: The second season of Anyone But Me is currently airing on Blip TV! 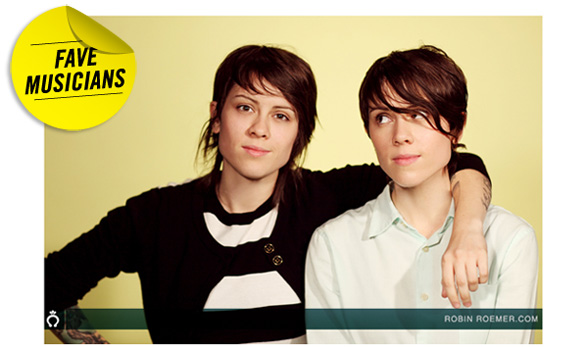 We want to give them this award every year, but it’s so much easier to do it when they’ve put out such an awesome album. Sainthood dropped in 2009, and we said so much about it then (the review! the interviews! the track breakdowns!) that we’re not sure we can say anything else about them now besides that our love for them grows deeper every day. 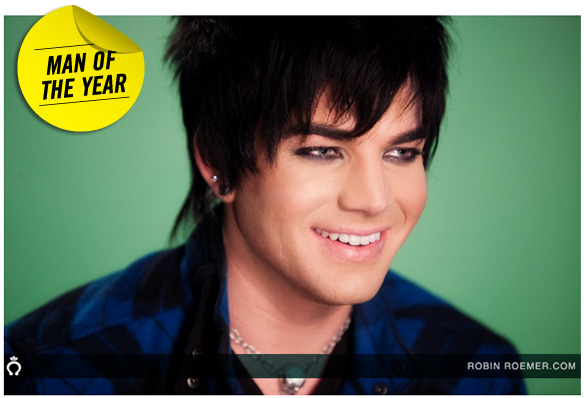 We fell in love with Adam at first sight; and though his American Idol loss was depressing, we suspected he’d do just fine on his own and now he has. He’s been open about his sexuality in a way that few (if any?) male pop stars have before him, and he’s ruffled many feathers while doing so. And for that, we can do nothing but salute him! Furthermore, he’s making you like a queer sensibility and surrender to its power during a media-saturated era of oft-dashed hopes, and so is Lady Gaga, so maybe this is the year the public started to love the rowdy inverted stereotype they’ve always had of the queers. Rock ‘n roll is about deviance, and Deviance is the new Friday Night. His video for For Your Entertainment makes us feel how straight girls feel about Slave 4 U.

2010: Adam has announced plans for “a tour that pulls out all the stops with “costumes, fire, dancers” and “the whole nine yards.” ADAM WE WILL BE THERE.

2. Rachel Maddow – Nerd of the Year 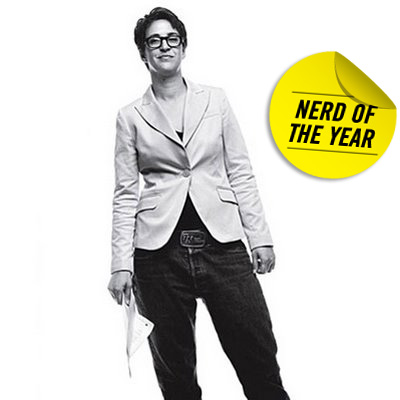 Would Rachel maintain the momentum her show earned during the 2008 Election Season? As she reminded us last month with her 30-minute interview with ex-gay leader Rich Cohen — YES. Smart, dorky, sassy, and completely unaffected by whatever people say about her, she might be the most reasonable human being on television. Bonus — she’s so geek-hot-adorable.

2010: Rachel will be mixing drinks and eliminating right-wing extremism every night at 9pm on MSNBC! 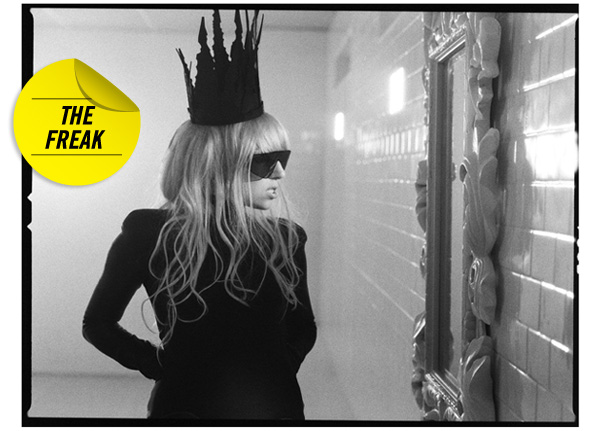 We actually don’t even care if she’s had sex with a woman before — her allegiance to the GLBT community has never really even been about that. It’s about waving her freak flag high, being candid, and breaking boundaries by bringing performance art into the pop cultural stage.

Gaga’s songs are merely the soundtrack to Lady Gaga: The Performance, as saucily suggested by the Gossip Girl Lady Gaga-scored Snow White musical episode a few weeks back — what pop star at the height of their career subjects themselves to a prime-time teen drama or to reality shows (she’ll guest on Launch my Line this week)? Lady Gaga! Because she’s an equal opportunity performer, finding value in every stage on every set.  She goes through incredible effort to assure universal access to Lady Gaga: The Performance, which is unique for an artist of her style. She’s appeared on just about every award or talk show and performed just about everywhere in the world. She has made herself impossible to forget and despite overexposure, is consistently memorable.

Her second album is, like the first, f*cking amazing. Even if you don’t like Lady Gaga: The Performance, the work itself is undeniably good stuff. It’s solid, quality pop music.

We love her especially because in interview after interview, regardless of who she is talking to, she is relentlessly loyal to the gay community. No other pop star at her level has so vocally supported gay rights, or done anything like citing her opportunity to speak at the National Equality March as the highlight of her career. She wore red latex to visit the Queen of England but dressed demurely & respectfully for the gays… it’s always inspiring when someone who has a voice uses it as best they can.

2010: She’ll be touring the US until the end of January, the UK in February and the beginning of March, Australia in March to April, two Asia dates, and yet-to-be determined European tour dates in May. All updates can be gotten straight away on Lady-Gaga-net.

Hey Jane Lynch & you other rockstars –
wanna show off your Icon-status?
Copy and paste this code to show off your icon badge
on your website/blog/myspace/whatevs: 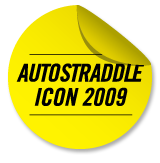