I went back inside to wait to interview Michelle. While I was waiting, I overheard the owner of The Trunk Space telling the members of Sister Spit about the young woman who had designed his logo. Turns out, this artist also happened to be a Suicide Girl. Interesting, right? Then I sat down on the stage with Michelle, and this is what I said: 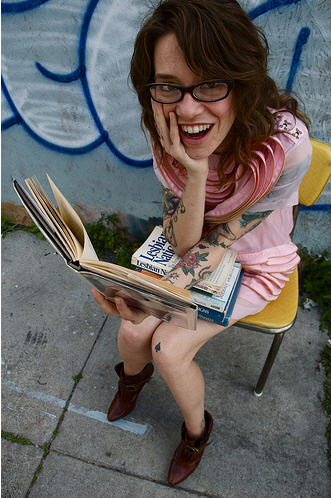 Laneia: So, first of all, are the girls handpicked for Suicide Girls — SUICIDE GIRLS!? NO. He just said!-
Michelle Tea: [laughs] Yeah, I go to the Suicide Girls website and just ask if they write. No, yeah, I pick everybody.
[omfg]
Laneia: [laughing] Ok! Because I read that in the beginning [Sister Spit v.1] they were picked out of a hat. Was that a joke?
Michelle: No, it’s not a joke. I mean, we always edited who went into the hat.

The idea behind that came in the 90s from the experience of running an open mic for two years. There were so many people to pick from, and it was hard to make those decisions, especially if we were friends, and we WERE friends with everyone, and besides it was too big and hard to figure out who would be good. So a hat seemed the fairest way to do it. Occasionally we’d pull someone and think, “oh, actually, that wouldn’t work,” because we wanted to make sure to pick people that aren’t just strong performers but also were serious about writing, people who knew that writing was what they were on earth to do, you know? We wanted to get people who’d use the opportunity to really create a writing career for themselves.
Laneia: And that’s what you’re doing with these girls.
Michelle: Oh god yeah. Absolutely. I couldn’t bring anybody who just thought it was maybe like a hobby. Sometimes you never know what people will end up doing with their work or what the rest of their lives will hold, but I always bring on people who are talented and take themselves seriously. And that aren’t going to be crazy in the van.

Laneia: How does the Next Generation tour differ? I mean, how is the world different than it was for the first tour?
Michelle: It’s different in a lot of ways. I mean, it’s different in that we were definitely coasting on a wave of popularity of spoken word — for whatever reason it was really popular and hugely popular in San Francisco and similar cities across the U.S. There hadn’t been poetry slams yet, and spoken word was this cool new thing. So that’s different. It’s not happening like that now, but our shows are still successful in spite of that, but I feel like there was that. It’s hard to know what is the world having changed and what is me having changed, do you know what I mean?
Laneia: Yes.
Michelle: When we first went out, it just seemed almost scary. A lot of people who had come to San Francisco came because they had lived in other places where it was really unsafe to be queer or have an alternative gender expression. Everyone sought refuge in San Francisco and then to leave and go back out into the country felt really scary. You know? It really did.
Laneia: [nodding ferociously]
Michelle: And it just doesn’t feel that way [now]. Obviously there’s still hate crimes and crazy people everywhere. But I don’t know if it’s just that I’m used to it and I don’t feel as traumatized? A lot of people who carried a lot of trauma from being queer then, so it was a real act of bravery to go out and to do this. And I think it still is, in a lot of ways. But that felt more acute. It doesn’t feel as acute now.

And I also think there’s a feeling of safety in people knowing of Sister Spit and the reputation we’ve built up. Maybe it’s an illusion of safety, but that feeling is still there, that we’re out doing this thing, and we’ll be protected by the fact that people know us and love us, and we’re gonna be okay.

And because we’ve been doing them for so long, our shows are bigger. We have the most amazing tour booker now, it’s great. We get to do COLLEGES now, which we didn’t do in the ’90s!

Laneia: You didn’t do any in the 90s?
Michelle: I didn’t go to college, and the person I was doing it with, Sini Anderson, she didn’t go to college. And it was like the whole world of college– it wasn’t like, “Fuck it.” — we were like, “How do you do a college? What kind of colleges are there?” I think if you go to college you like, know. You know about various colleges because you’re considering going to them? We just were completely ignorant about that whole world and din’t feel colleges would want us. So it’s great to do them now ’cause we get paid! The tour is just entirely different. It’s more professional, which sounds weird, but it is, because these are working artists so we need to add an element of professionalism to sustain i and to respect the performers as working artists. 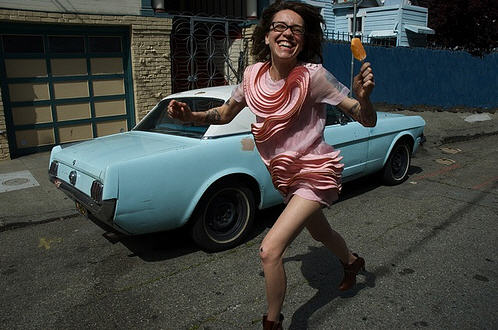 Laneia: A lot of the performers said that the reason they’re doing Sister Spit is for the adventure and also to get themselves out there. Why are you doing it?
Michelle: Oh, I just love it. It’s so much fun. I’m the kind of person, if I find something that I think is really cool, I want to show it to everybody. You know? So it’s kind of like that. I’m really lucky, and I’ve been doing literary curating for over a decade. I know a lot of different performers, and to me it’s almost like that idea of the, “Who would you invite to your ultimate dinner party?” game. Who would I want to bring in the van; who do I want to know about each other and to get to travel together. And it’s just really really fun! As much as I’m on the earth to write, I’m also on the earth to bring writers together and put on shows like this. It’s really important for writers. If anyone has the energy to do stuff like this, they should. Because not a lot of people do. I don’t know how I do.
Laneia: [laughs. nay, giggles]
Michelle: But I do. 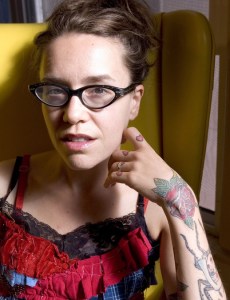 Laneia: I read a 2004 interview you did with Velvet Park and you said, “If a space doesn’t exist for you, make one,” which I thought was really powerful. Do you feel like your space is made now? And also, how does it feel to know that you’ve made a space for other people?
Michelle: Well, yeah. I mean, I feel like I have a big space. The thing that’s really cool is I feel like if you do something really doggedly and with a lot of focus and energy, it just builds. Everything you do just builds on the next thing that you do. You just have to stay focused and continue to do SOMETHING, and it’ll just keep happening. [smiling:] Do you know what I mean? So it’s like, everything that’s happening right now absolutely is happening because of the open mic that happened in ’94. Do you know what I mean? There were a million steps in between to make everything, to give me the writing career that I have now.

And I love helping other people. I’ve been completely helped by other writers. I got my first book because Eileen Myles, without me even asking her, just took it upon herself to help me get published. And the writer Inga Muscio hooked me up with her publisher for my book, “Valencia.” The writer Stephen Elliott has helped me get published in The Believer.
Laneia: Your Believer piece on Beth Ditto was awesome.
Michelle: Oh, thank you.
Laneia: So good. [what I wanted to say was WHAT YOU SAID ABOUT POVERTY AND CLASS MEANT SO MUCH TO ME. I WANTED TO SAY THAT. –laneia]
Michelle: Thank you! So yeah, writers are really generous with each other.
Laneia: What kind of books do you recommend for young queer girls? Especially those who aren’t living in a really supportive environment.
Michelle: Ali Liebegott’s “The Beautifully Worthless” and “The IHOP Papers,” Eileen Myles, they should read “Cool For You” and “Chelsea Girls,” and she’s got a ton of poetry, too, so they should read all her poetry. They should read Dorothy Allison’s “Bastard Out of Carolina.” Linda Barry’s “Cruddy,” look at whoever’s toured on Sister Spit and see what they’ve written. And they should read all of that [laughs]. And it’s really cool, you can look at presses. If there’s a book that you find that you feel really excited about, you can look at the press and you can see what other things they publish. Especially if it’s like, a little off the beaten path, it’s probably on a small press and they probably publish other writers that are similar.

Sister Spit will be roaring through the countryside all October-long. Take a look at the tour schedule and make plans to go see them for yourself! Be sure to take plenty of cash because the merch table is awe-inspiring and you’re going to want to take home one of everything. If you miss them in October, do everything in your power to catch the brand new lineup in April!

Special thanks to Amos Mac for allowing me use of his gorgeous photographs. Rhiannon and Amos collaborated on The Popsicle Project, which featured some big name homos like Brontez from Gravy Train!!!, Michelle Tea, and Sister Spitters past and present, such as Cristy Road, Sara Seinberg, Ben McCoy and Nicole Georges. It premiered during Pride month all over the walls of the Lexington Club in San Francisco and is now a purchasable book! Amos is also Editor-In-Chief of Original Plumbing, a magazine dedicated to the sexuality and culture of FTM trans guys. I’m recommending the hell out of this publication. Issue #1 is out now and available at all Sister Spit shows!