RACHEL MADDOW: Rachel Maddow spent almost 18 minutes talking to Richard Cohen, author of “Coming Out Straight,“– a book which hopes to teach you how to “reject” your “homosexual tendencies”. Hey remember Uganda? They’d like to kill the gays for being gay and guess what — they’re citing this asshole’s book in their reasoning! Isn’t that fabulous? Not as fabulous as being this man’s wife, but hell, that’s another story for another day!

Here’s what you’re about to do: watch this video. It’s long but more worth it than anything else you’ll watch online today. Rachel Maddow continues to be the most outspoken ass-kicking lesbian we know and the best part? SHE’S ON YOUR TEEVEE FIVE NIGHTS A WEEK.

Also, “I’m reading it from your book, dude” is our new ringtone and favorite line ever. Actually Rachel has several amazing moments in this video, especially the wrap-up at the end FTW. 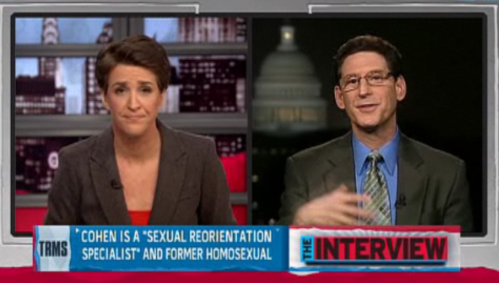 HIPSTERS: The Evolution of the Hipster over the last 10 years, from emo to meta-nerd. (@paste)

GAY STUDENTS: Gay Students Wanting to Be Seen: “For many teens, the adolescent experience is defined by a desire for acceptance among peers. But for gay and lesbian students, in schools across the country, there’s another issue at stake. It’s the fight to be represented publicly in high school and college rites of passage: the yearbook, the big school dance, the homecoming court.”

GENDER ROLES: Testosterone, Anger, And Greed: How Gender Stereotypes Influence Us: gender stereotypes may be so ingrained that they influence how we see faces — yet what we believe about sex differences may be more influential than biology. (@jezebel)

GIRL-BASHING: Girl-bashing and its consequences “Most people have a compulsive urge to divide so-called sluts into the categories of innocent and guilty … girls labeled “sluts” who are sexually innocent do not deserve to be mistreated, while other girls are guilty of the crime of having been sexual and therefore deserve to be bullied. According to this logic, only those who are innocent and “good” are worthy of our empathy. The rest of them? Who cares–they’re “sluts”!”(@huffpo) 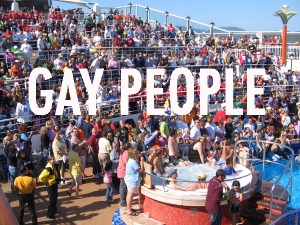 GAY TRAVEL: A recent survey has found that 51% of gay families prefer to go on holiday with other gay people, ideally other gay families. We consider all gays our family, except the asshats, and therefore agree, mostly because we are afraid of other kinds of vacations with less hot girls. Personally, we enjoy Sweet or R-Family!

BOOKS: Intern Emily says: “This makes me sad because Internicaine Katrina took me there when I first met her in DC!” Lambda Rising bookstores in DC close their doors. Lambda Rising, a bookstore serving the LGBT community in the nation’s capital for 35 years, is closing its D.C. store in Dupont Circle and its remaining out-of-town store in Rehoboth Beach, Del., in January. (@dcagenda)