My life is very gay. I live in a queer co-op in Jamaica Plain. I write for Autostraddle. My Netflix recommendations are all “Quirky Dark Romances Starring Various Alternative Lifestyle Haircuts.” Sometimes I zoom out for perspective and I see myself inside a giant queer soap bubble with extra rainbow sheen. Sometimes – somehow – I momentarily forget that straight people exist.

But they do, and some of them are awesome. These people are called allies, and they deserve to be recognized, and celebrated, because it takes a worthwhile person to work on behalf of a group he or she doesn’t belong to, and because they’ve been killing it lately. And after all, some of our best friends are allies! Without further ado, here’s a roundup of non-queer people who have recently used their various influences for the queerer good. 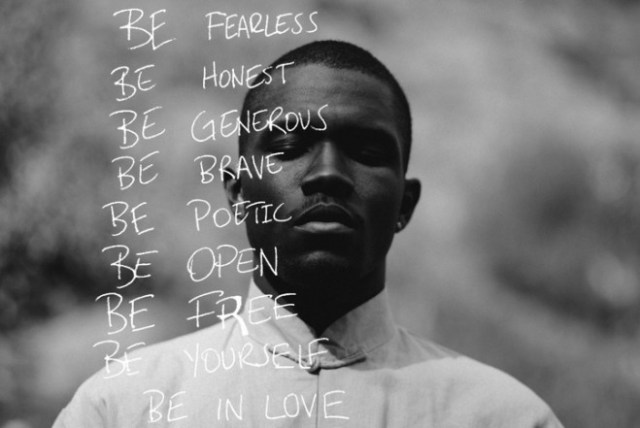 Frank Ocean inspired an ocean of frank support; also a poem (via Beyonce)

Musicians make great allies because they tend to express themselves particularly well, and because they have that kind of charisma where they can forge intimate connections with individual fans and also rouse entire concert crowds into passionate frenzies (I would go to war for Gaga most days, but five minutes into her Monster Ball show I was mentally designing the meat armor). Madonna has been doing this lately, re-earning her status as an always-and-forever gay icon by handing out pink wristbands at her shows in order to publicly protest a proposed Moscow law that would fine people for “spreading homosexual propaganda.”

Ben Gibbard (of Death Cab for Cutie and The Postal Service; formerly married to Zooey Deschanel) wrote the first essay for McSweeneys’s “90 Days, 90 Reasons” Obama re-election initative, and he chose to talk about the President’s support for same-sex marriage, writing that “Marriage equality is undoubtedly the most important civil rights issue of our generation… we must elect a leader committed to being on the correct side of history.” His piece is endearing and to-the-point, and now I can almost forgive him for soundtracking the sad parts of all my high school roadtrips.

Even more endearing is this letter Fiona Apple wrote to a gay fan back in 2000, after he asked her for some comments for his high school’s Gay-Straight Alliance. He put the letter on his Tumblr in March, and in typical Fiona style, it is insightful and poetic and full of anaphora: 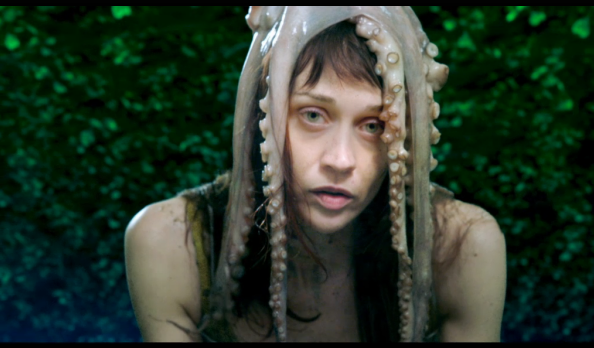 When Frank Ocean told Tumblr back in July about how his first love was a man, many musicians took the opportunity to give him and the gay community props, including Russell Simmons, Jamie Foxx, Action Bronson, Mac Miller, and Erykah Badu. Depending on what level you think they’re operating on, Odd Future either illustrated the inherent absurdity of making sexuality an issue at all with a well-thought-out extended metaphor, or they just wanted to talk about bagels. And the Carter/Knowles empire reaffirmed their support – Jay-Z posted a beautiful dream hampton essay on his website, Beyonce made a picture-poem, Solange tweeted and Blue Ivy likely gurgled in an exceptionally compassionate way. 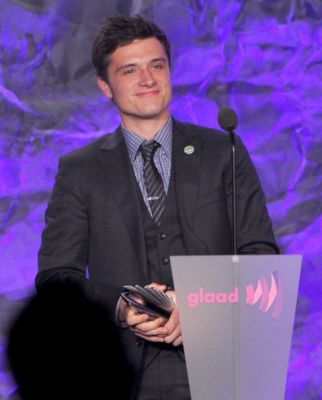 Anderson Cooper’s coming out provided a similar opportunity for members of the entertainment industry – Mia Farrow, Joan Rivers, Tyra Banks, Jimmy Kimmel and Kelly Ripa and Cutrone all offered him virtual high fives. Meanwhile, Julianne Moore backed up her progressive artistic choices by denouncing the Boy Scouts of America’s anti-LGBT policies, as did Benicio del Toro. Ed Helms will no longer eat at that restaurant that we don’t talk about anymore (he tweeted, but I wish he had done this), Charlize Theron tweeted her support of National Marriage Equality Day and Josh Hutcherson became the youngest ever GLAAD Vanguard Award honoree for guarding a van his involvement with Straight But Not Narrow. Roseanne Barr, the first ever recipient of that very award, recently commented on the strength of her siblings’ gay relationships and is running for president on a platform that supports equal rights. Finally, in the Second Chance department, Brett Ratner is trying to make up for last year’s mistakes by filming a series of GLAAD PSAs featuring famous people “coming out” as allies, which makes him the most meta-ally on this list (hopefully all of the PSAs will look like Rush Hour). Onscreen media has enormous power to influence the public consciousness, including perceptions of queer people. The more members of that industry who are vocal about supporting LGBT rights, the better, even if all they do is tweet. 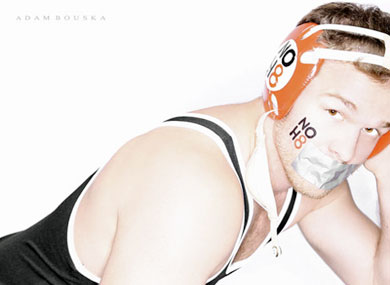 Although our throats are worn out from cheering for gay Olympians and more gay Olympians, we can quietly appreciate some sporty allies. There are still surprisingly few out athletes, which is too bad, because athletes make fantastic role models and stereotype-crushers, and the physical barriers they break can change history – think of Jesse Owens at the Berlin Olympics, or Bobbi Gibb sneaking into the Boston Marathon in 1966, six years before women were officially allowed to run. Increased presence of allies at all levels could make the sports world – with its pervasive sexism, gender policing and notoriously scary locker rooms – a more welcoming place, and help change it from the inside.

Hudson Taylor, a former University of Maryland wrestler and theater major, found some major discrepencies between his two main environments while he was in school. In response, he started Athlete Ally, an organization dedicated to helping coaches, players, and fans “respect all individuals involved in sports.” They’re currently teaming up with GLAAD to lead LGBT-friendliness training sessions for every single NFL, MLB, MLS, NBA, WNBA and NHL team 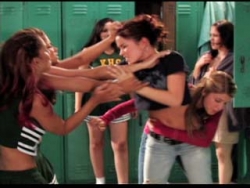 The blog OutSports found that many athletes are way ahead of the game when a strategically placed red carpet reporter interviewed attendees at the ESPYs last month. The site also has an interview with Minnesota Vikings punter Chris Kluwe, who is actively opposing the proposed Minnesota same-sex marriage ban via radio ads. In a recent Q&A, Australian rugby player David Pocock talked about his decision to not to marry his fiancee until gay marriage is legal in his country, telling the audience “I really think the debate about equal rights and marriage really has to move forward and can’t be used as a political football,” and winning the Charming Sports Metaphor award in the process. Former NFL star Doug Christie and his wife Jackie are already married, but they decided to renew their vows in a gay bar in order to “bring attention to the gay community” and marriage inequality. And over in London, carbon-calved wonder Oscar Pistorius just plain old loves his gay fans: “heard some guy shout out, ‘Oh you sexy beauty!’ ” Pistorius said. “It’s moments like this that you just have to step back and go, ‘Wow, I’ve been blessed by the Lord.'” 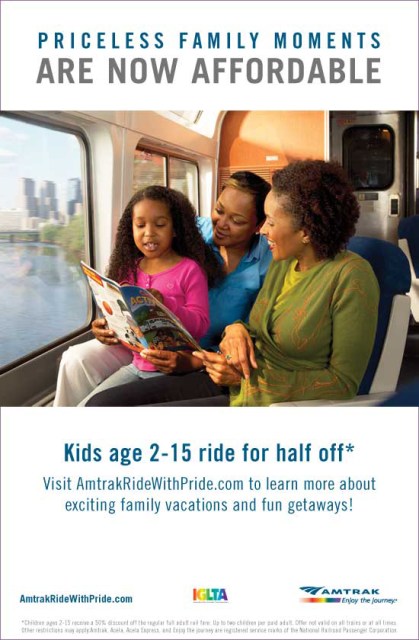 The corporate world is getting in on the act too, with certain companies embracing inclusive advertising, and some CEOs using their influential positions and gazillions of dollars for good. JC Penney blazed the trail with their recent Two Moms/Two Dads ads and catalog shots, and now Amtrak has unrolled its “Ride with Pride” campaign, featuring their own Double Mom/Double Dad ads, a website with destination recommendations (e.g. “Martha’s Vineyard is extremely gay-friendly… some enjoyable pursuits include exploring the Aquinnah (“Gay Head”) cliffs”), and a hastily photoshopped rainbow blaze logo.) Amtrak has done this because “Simply put, our business diversity philosophy means commitment to ensuring our company embraces a culture of respect and appreciation for differences and similarities of all people.” Even more simply put, the Jim Henson corporation ended its partnership with that restaurant we’re still not talking about and CEO Lisa Henson has donated all the money they earned from that partnership to GLAAD. 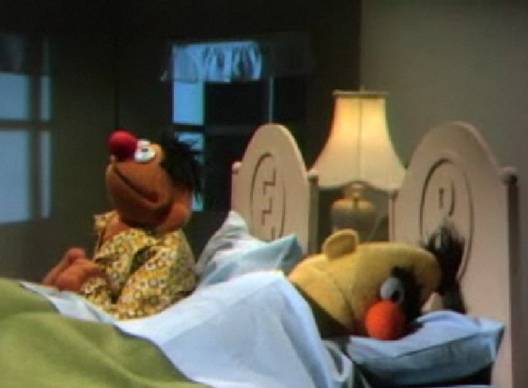 After a personal entreaty by unfairly ousted scout leader and activist Jennifer Tyrrell, the CEOs of AT&T and Ernst & Young are using their clout as Boy Scouts of America board members to try to overturn the organization’s discriminatory policies. Dreamworks Animation CEO Jeffrey Katzenberg and his wife Marilyn are set to receive this years’ GLSEN Lifetime Achievement Award in October for their work promoting acceptance in classrooms, and probably for making Chicken Run, which presciently denounced poultry-based fast food establishments. Meanwhile, Amazon.com CEO Jeff Bezos and his wife MacKenzie recently donated $2.5 million to Washington United for Marriage, making Bill Gates and Steve Ballmer’s $100,000 donations seem puny. It’s no secret that the motivations behind these corporate decisions aren’t entirely pure, but it’s hard not to be happy when capitalist consequences end up favoring us. 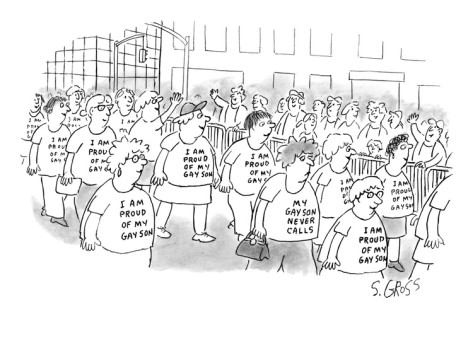 {via The New Yorker}

Last and most, there’s the rest of the world. Regular-people allies make me happier than musical, screen-based, athletic and corporate allies combined, and due to the approaching elections and the many recent polarizing events, lately they’ve become fantastically loud. Boy Scouts are turning in their medals left and right. My facebook newsfeed is chock full of anti-discrimination infographics getting indiscriminately passed around. It’s hard to open a local or a national paper without reading a letter to the editor by an eloquent and supportive parent, or an op-ed by a former religious conservative who has seen the light, or a story about a 40-year-old gay man who convinced his Republican father to be an ally on election day. These are the ones I like best. In the end, the point of celebrity allies is to encourage non-celebrity allies, to spread knowledge and compassion until “ally” isn’t even a word anymore, because it’s just assumed. But until then, I’m proud of our allies, and I hope they keep coming out.