THE KIDS ARE ALRIGHT:
Juliane Moore’s second lesbian film of the year, The Kids are Alright, premieres in July. The full HD trailer is available now, and it seems pretty cool, except for this one part that we totally saw coming but hopefully won’t be a big part of the movie. You know what we mean. Watch it!

Also, Alice from Alice in Wonderland is in it. Also, Mark Ruffalo, who I still love for You Can Count on Me.

SEX AND THE CITY 2:
The new trailer is out. Once again the ladies go on an expensive vacation we could never afford, worship handbags, etc. Check it out. Queerty says there will be gay stuff, like a gay wedding, and also Liza Minelli: “Yes, there will be something for the gays in Sex and the City 2 — the most unlikely of gay romances — Anthony Marentino and Stanford Blatch — results in a wedding to end all weddings.” (@jezebel) (@queerty)

ADAM LAMBERT:
Adam Lambert will be on American Idol next week. You know what that means: Ellen and Adam will be on your teevee box at the same time! He’ll be performing on the April 13 episode, so mark your calendar.

BIG GAY SKETCH SHOW:
Also coming up is the Big Gay Sketch Show premiere on April 13th. We’ll have a lot more for you on this next week, but we want you to start getting excited NOW. And not just because of Julie Goldman. Also; because of Kate McKinnon and Nicol Paone. Here’s what our friendly PR man at Logo has to say:

PORTIA:
Portia de Rossi is going to write a memoir! It will detail a bunch of things, including her struggles with eating disorders, her difficulty coming out as a lesbian, and how ridic stupid happy she is with Ellen now. Sounds like a good read! (@people)

GAGA FOR GAGA:
There’s a couple Lady Gaga-related stories today, so we’re combining them under one header. Smooth, right?

+ So Cole Gofort, a 15-year-old kid in Tennessee, was sent home for wearing a t-shirt that read “I Heart Lady Gay Gay.” Because gay is a bad word, I guess? Anyway, Lady Gaga heard about, and obvs she came to the defense of one of her little monsters. 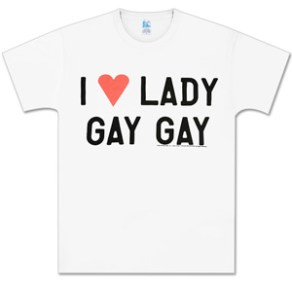 “Thank u for wearing your tee-shirt proud at school, you make me so proud, at the monsterball, you are an inspiration to us all. I love you,” Gaga tweeted on Wednesday…

“I love you Cole, you just be yourself,” she added early Thursday morning while on tour in Australia. “You’re perfect the way God made you.”

Apparently administrators said the shirt was causing a disruption, and they were worried it would escalate some fights that had been happening at the school. I think we all know what’s up, though. I mean, shouldn’t they be worried about the kids who are actually fighting instead of the kid expressing his legitimate identity? Just a thought. (@mtv)

+ Lady Gaga is apparently a new street name for heroin. A guy was arrested in Syracuse, N.Y., with bags of the stuff stamped with “Lady Gaga.” I thought we already had enough nicknames for heroin? But if you’re going to give anything a nickname, it might as well be Lady Gaga.

RIOT GRRL:
Everything I Know About Love I Learned From Riot Grrl: What bands like Bikini Kill and Sleater-Kinney taught me about relationships. (@nerve.com)

COLIN:
Actor Colin Farrell has a gay brother and will be supporting an Irish campaign against homophobic bullying. The 31-year-old star, who is from Dublin, spoke out for LGBT charity Belong To’s STAND UP! campaign. (@pinknewsuk)

90210:
‘90210’: Jessica Lowndes on Ade’s sexuality, ‘I don’t think that she’s a traitor“ – “I don’t believe that,” she adamantly states. “[Adrianna is] truly connected with Gia at this time in her life. She is attracted to men, as well. That has been her life up to this point and I don’t think that she’s a traitor by any means or is just doing it for drama. She likes this girl and she happens to be a different gender than she usually dates. But, then you see Gia, who is attracted to women and that’s the way she is. You see two different sides.” (@latimes)

GAY MARRIAGE REF:
An interview with the couple who appeared on The Marriage Ref last night. (@out)

CORIN TUCKER:
Did you know that Sleater-Kinney’s Corin Tucker is releasing some new material soon? It’s true. Here’s a cute interview with her about that and also other things! Over a conversation in the dining room, Sinéad O’Connor’s The Lion and the Cobra is cited as a reference point for the album in progress, as are the Slits, the Raincoats, and the English Beat. (@portlandmercury)