Last month when conservative activist group One Millon Moms freaked out about JCPenney hiring Ellen DeGeneres as a spokesperson, JCPenney essentially told One Million Moms to f*ck off and even publicly reiterated their commitment to DeGeneres and the campaign.

After beating One Million Moms, it would appear that JCPenney went ahead and tracked down Two Dads, putting them in this Father’s Day ad:

Yup! That’s Todd Koch and Cooper Smith and their kids, Claire and Mason. As Nerve.com wrote in their piece about the ad: “I want you to do something for me. Picture one million conservative soccer moms opening up their mailboxes and seeing that ad at the top of the pile. What do you think their reaction will be? (Quick thought for a viral video: can we put video cameras in mailboxes? That’s still legal, right?)”

We told you earlier this week about Johnson & Johnson/Walgreens’ anti-bullying initiative, for which they are partnered with PFLAG and Betty DeGeneres, and suggested that the tide could be turning in our favor. This is further evidence of that trend.

Honestly, I think appealing to the gay market is a brilliant idea for JCPenney right now, and I’m not just saying that because I’m gay. See — JCPenney isn’t cool. Right? I think it used to be cooler, maybe — in the 80s and 90s, I was certifiably obsessed with the excruciatingly heavy JCPenney catalogs that arrived quarterly in our home, which I’d use to create hand-drawn spreadsheets for my family about all the presents I could buy them if I got a raise in my allowance. JCPenney was a reliable big-box mall staple with a relatively inventive Juniors section. Everybody shopped at “Penneys.” This was before the internet, before Target, before outlet malls sprang up all over the Midwest promising even better prices on brands regularly hawked by department stores.

In the ’00s, JCPenney’s market share started slipping (Sears met a similar fate). Barclays Capital analyst Robert S.Drbul told his clients that from 2006 to 2011, “J. C. Penney has had the worst performance among peers.” Shoppers hit up Target or Wal-Mart for cheap one-stop shopping and visited the internet, Saks, Nordstrom or Bloomingdales for high-end indulgences. The middle-road market was increasingly dominated by Macy’s for about a billion reasons not particularly relevant to the overall topic of this post. Coincidentally (OR NOT!), Macy’s has a long history of supporting LGBT events and advertising with LGBT publications (One Million Moms doesn’t like that either.) Just saying. 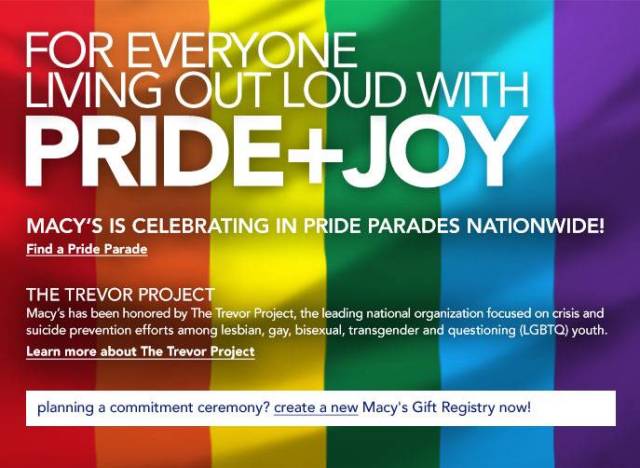 In 2011, JCPenny hired Harvard-and-Stanford-educated Ron Johnson to take over as CEO and turn the company around. Johnson came to the job with ten years of experience working for the very gay-friendly Apple during unarguably their most glorified glory years. In fact, Johnson pioneered the “Genius Bar” concept, and within two years of their debut, Johnson drove the Apple Retail stores to excede a billion dollars in annual sales, beating The Gap‘s record. Prior to Apple, Johnson had worked as vice president of merchandising for Mervyn’s and Target. He’s also one of the richest people of all time, apparently, and there’s been some controversy about his bazillion dollar compensation packages and its affect on JCPenny stock values. His plans include revamping the store into specialty boutiques featuring brands like Sephora and changing something related to coupons or pricing that I don’t understand. But it also needed an image makeover to compete with Macy’s.

So, what’s the best way to make your brand seem cooler, more current, and less like a relic of shopping malls past? GAY PEOPLE! We’re edgy and relevant and fiercely loyal, after all (and we’re often too excited about being targeted to get upset about like, the ultimate corporate takeover of this fucked-up country). But this has been true for a while, and the few brands willing to take a risk that the benefits of targeting the gay market would outweigh the backlash have generally been brands that were already slightly edgy in their overall appeal, like Absolut Vodka, IKEA and Orbitz, or brands for which anti-gay consumers couldn’t really afford to vote with their wallets, a.k.a., airlines.

But, much like Walgreens and Johnson & Johnson, JCPenney is very Middle America. This choice to push forward with Ellen and now to feature same-sex couples in their ads means that the benefit must outweigh the risk. 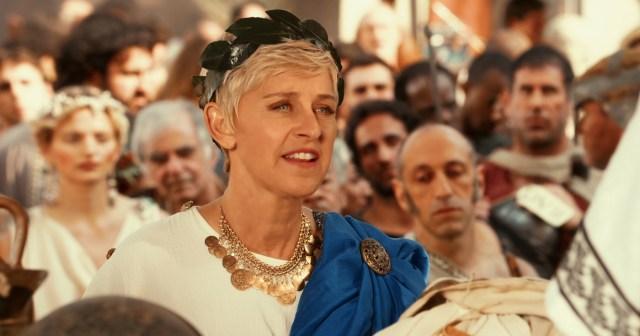 I know it sounds like a stretch, but there’s a comparison to be made to Obama’s recent endorsement of same-sex marriage — Obama’s reputation as progressive and courageous had been sliding, and what’s the best way to make your candidate seem cooler, more current, and less like a relic of tentative conservative candidates past? SUPPORTING GAY PEOPLE! But this has been true for a while, and the few candidates willing to take a risk by supporting gay rights have usually been those running for smaller offices in gay-friendly districts. But Obama has to appeal to Middle America, too, not just the coasts. This choice to push forward with same-sex marriage supports mean that the benefit must outweigh the risk.

Oh, and, the copy for the JCPenney ad is pretty cute, too: “First Pals: What makes Dad so cool? He’s the swim coach, tent maker, best friend, bike fixer and hug giver – all rolled into one. Or two.”