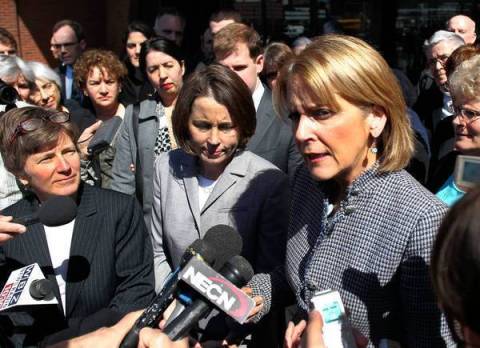 The ruling itself doesn’t mean anything immediate for the future of DOMA; the Boston court doesn’t have the authority to affect a federal law. The most important effect of the decision (which you can read here in full) is that the constitutionality of DOMA will almost certainly be decided before the Supreme Court. The Obama administration and Department of Justice have already declared that they consider Section 3 of DOMA unconstitutional and will refuse to defend it in court; how exactly that will play out if DOMA in its entirety is brought before the Supreme Court is an exciting possibility. DOMA was defended in court in Boston by Paul Clement, the attorney hired by John Boehner and the House of Representatives.

Unlike rulings like Judge Walker’s on Prop 8, this decision isn’t about discrimination or equal rights, necessarily — or at least that’s not the language used in the ruling. According to the panel of the appeals court, this is about state’s rights. While the federal government has argued that gay marriage should be a decision left up to the states, which is why some states allow it and some have state constitutional bans against it. But the argument being made in Massachusetts is that DOMA limits state’s rights because states aren’t allowed to confer full equality to their citizens if they so choose. As Judge Michael Boudin, who wrote the decision for the panel, put it:  “One virtue of federalism is that it permits this diversity of governance based on local choice, but this applies as well to the states that have chosen to legalize same-sex marriage.”

White House spokeseman Jay Carney refused to say whether the White House would actively pursue overturning DOMA if the case appeared before the Supreme Court. While the text of the decision declares that “the federal government cannot deny these couples the right to file a joint federal tax return or to receive a survivor’s benefit under the Social Security Act,” the ruling won’t mean any immediate change for those couples who live within the circuit court’s purview — Massachusetts, Maine, Rhode Island, New Hampshire and Puerto Rico. Despite the wording of the ruling, equal benefits won’t be a possibility until the Supreme Court rules, which is expected to be next year.

This ruling isn’t the blow that will end DOMA forever, but it’s the latest in a series of serious setbacks for the 1996 legislation that have many wondering whether we’re finally seeing DOMA’s last days. The Supreme Court isn’t bound by the attitudes of the current administration, so there’s no guarantee that DOMA will be declared unconstitutional by the Supreme Court next year. But there’s hope. And if so, the victory of principle that happened in Boston today can be shared by the whole nation.