Regardless of the marriage equality victories won in places like Washington and Maryland, real equality still isn’t an option for gay families thanks to DOMA. The federal legislation originally passed in 1996 prevents even same-sex couples who are legally married in their own state from receiving federal benefits. It was a big step when the Department of Justice announced their decision to stop defending DOMA in court from the myriad lawsuits it’s facing and Obama declared DOMA’s Section 3 unconstitutional. But now, DOMA may be facing its biggest threat yet: a challenge to its constitutionality in a federal appeals court in Boston. 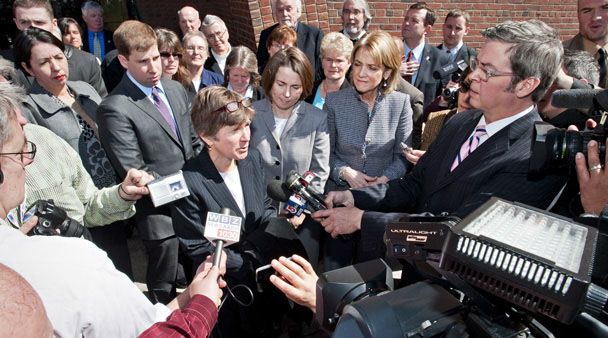 To be clear, DOMA’s fate in the appeals court won’t determine whether more same-sex couples are able to marry. In fact, it probably won’t determine anything in and of itself; regardless of what happens in Boston, the case will be appealed to the Supreme Court, where a decision will likely be handed down next year. And even then, it won’t be a ruling on anyone’s right to marry, but a ruling on whether couples legally married in their home states will be treated as equal to straight couples under federal law.

The arguments currently being presented in Boston are still a major development, though. It could be the first step in same-sex married couples receiving the same rights and benefits under law as their straight counterparts. For instance, Nancy Gill, who is represented by Gay & Lesbian Advocates & Defenders in Boston, isn’t able to add her wife to the healthcare plan provided to her as a US postal worker, even though the couple has two children together.

In addition to what it could mean for gay Americans, the case also holds significant import as far as the right for states vs. Congress to determine what privileges individual citizens are afforded. It also marks a new move for the Department of Justice, who had previously stated that they wouldn’t defend DOMA because it was subject to a heightened level of scrutiny due to its impact on LGBT people. Now, however, the DoJ claims that DOMA is indefensible regardless of scrutiny. From Chris Geidner, who attended the proceedings:

As to the DOJ’s prior position that DOMA should be found constitutional if subjected to the lowest level of scrutiny — known as rational basis — Delery noted that DOJ’s prior briefs defending the law were superseded by its more recent filings and, hence, no longer the government’s position. Specifically asked by Judge Boudin whether the law should be upheld under rational basis review, Delery said, “I’m not here to defend it on any basis.”

The arguments presented in the courtroom today are perhaps familiar to anyone who’s followed court proceedings on similar marriage equality cases — whether Congress has a rational basis to deny full marriage equality, whether anti-gay “animus” was involved, and what marriage rights have to do with the ability to procreate. Interestingly, Clement attempted to make an argument that DOMA isn’t necessarily bad for same-sex couples in all cases, saying that for some couples DOMA could mean a “net financial benefit.” The three judges involved may not have been convinced, however; reportedly, their most skeptical questions were directed at Clement.

Now that DADT has been declared a thing of the past, DOMA is the next logical hurdle to overcome for the mainstream gay rights movement; and now DOMA, along with Prop 8, looks like it will likely head to the Supreme Court, maybe as soon as next year. Decisions on both cases will be handed down by a panel of judges, without the input of whoever happens to be in the White House. It’s not too much to hope that by this time a few years from now, Nancy Gills and her family will finally have the equal rights they deserve.