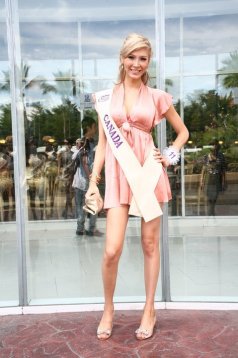 So many stories, so little time! Here’s what we missed this week:

Oh hey so, have you heard the one about the transgender woman who was kicked out of the Miss Universe Canada Pageant because she was trans? Probably you have, because it’s been all over the news! Basically, transgender beauty queen Jenna Talackova got kicked out, GLAAD fought back, and then Donald Trump — a gigantic asshole I hate with the fury of a thousand suns — took a brief time out from spreading his epic douchebaggery and consistently bigoted spirit throughout the land to allow Talackova back in to his f*cked-up contest. GLAAD says: “The Miss Universe Organization should look to state non-discrimination laws and institutions including the Olympics, NCAA and The CW’s America’s Next Top Model, which do not discriminate against transgender women.” That’s right. If only everybody could treat a woman how America’s Next Top Model treats a woman, it’d be a wonderful wonderful world for all women everywhere! No really, it’s great that Miss Universe responded to GLAAD and fixed that ish.

Well hold on to your pants, there’s another reason to be glad this week — after pressure from GLAAD and a lot of other places and people like high school student Katy Butler, the rating for the documentary Bully has been changed to PG-13, so now kids can see it and it can be screened in schools! Target audience is targeted.

In Anchorage, voters voted against extending basic civil rights to gay people. Thanks guys! But it’s not dead yet, maybe.

Daniel Radcliffe explains that he had no discomfort with boy-on-boy sexy scenes because “if he can simulate sex with a horse, he can handle a guy.”

Did you guys hear about the SUPER sexist and dumb thing that the creator of Two and a Half Men said about women in comedy? Writing about why this is so dumb is like falling off a log.

Brigham Young had a panel on being Gay and Mormon and the audience response was “largely positive.”

In Cameroon, authorities disregarded “freedom of assembly” and other such things by shutting down an LGBT Rights Workshop.

A lesbian couple in Maine is suing Bank of America for discrimination and a lesbian chef in New York won her case against a restaurant manager who held prayer meetings to “save” her in the restaurant while she was just trying to cook things and be a person — she’s banking $1.6 million dollars, because G-d shows his love in special ways.

Someone wrote a really awesome thing on Jeanette Winterson and Alison Bechdel, two people I’d like to have a picnic with.

Federal Court refused the request of Arizona state officials to take health coverage away from the families of lesbian and gay couples. Meanwhile, the Phoneix Mayor is working to draft an ordinance to outlaw discrimination against GLBTQ residents.

The Bizarre Calculus of Emergency Room Bills: “It’s like going to a Laker game, paying $150 for a ticket, and later getting an additional $75 bill in the mail from Kobe Bryant.”