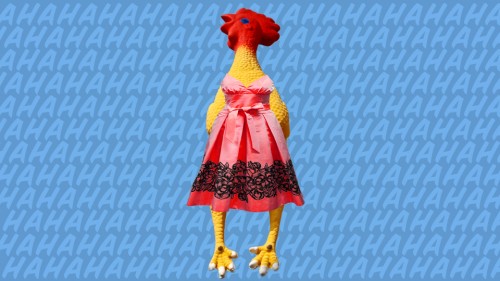 Oh, great! Let’s talk some more about how women aren’t funny. Science has performed yet another study of terrible people, and—surprise!—unearthed terrible results: Apparently women in the workplace are incapable of making funny jokes. Men’s jokes, on the other hand, receive laughs 90% of the time. The reason? Well, science checked with conventional wisdom, and conventional wisdom explained that “Men in general are the ‘funnier sex.'” COOL STORY, BROS. TELL IT AGAIN.

A study of executive-level meetings at seven large companies in the UK (half of the meetings were led by women, half by men) found drastic differences in both the types of jokes told by each gender and the general response to those jokes:

Women often resort to self-deprecating humor, with 70 percent of female senior professionals joking about themselves in a somewhat negative light, Baxter’s research found, as reported in the Telegraph. Still, this didn’t seem to earn chuckles: More than 80 percent of women’s jokes were met with silence. Meanwhile, 90 percent of jokes made by men were greeted with immediate laughter or approval. As a result, men were three times more likely to joke while leading a meeting.

Now, I don’t have any problem with this study, per se. It’s just a collection of data verifying a phenomenon that we’re all aware of, which is that nobody thinks women are funny and nobody laughs at women’s jokes. My problem is with the reporting on this study, and others like it, which, without fail, credulously latches on to a titillating but fundamentally sexist notion: that women might just be biologically less funny than men.

SFGate, for example, makes sure to consult some fucking guy:

Michael Kerr, a motivational speaker and expert on humor in the workplace, says this is due in part to how men and women are socialized.

“I know with my own surveys, and other research I’ve read, that both sexes tend to agree that men in general are the ‘funnier sex,’ ” he says in an e-mail interview. “What seems to be a consistent theme is that men are more likely to be humor creators, whereas women tend to appreciate the humor more and laugh more easily than men do.”

Even a psychology study published in 2011 by UC San Diego concluded that men were slightly funnier than women.

No. It is not due “in part” to how men and women are socialized. It is due entirely to how men and women are socialized. Oh, but “psychology” says men are the funniest? Well, I guess we’re done here! It certainly couldn’t be that women just shut up and laugh because we’re trained from birth that we’re supposed to be pleasant, pliable, and inoffensive, and that we should pander to men at all times lest we be labeled an undesirable. No, the obvious explanation is that every time a woman tries to tell a joke, an invisible dream-catcher telescopes out of her vagina and snatches it from the air. Science.

You know what? It’s true, actually. Most women aren’t funny. But that’s because most PEOPLE aren’t funny. Being funny is like any other artistic skill, but to wield it successfully requires outspokenness, unapologetic honesty, supreme self-assuredness, and an outright refusal to pander. And those aren’t exactly the traits we foster in our little girls. (Instead, we go with mistrust of other women, an extreme longing for expensive garbage, and the idea that being pretty is more important than being smart. Oh, here’s your toy, girls, it’s a fake baby that poops fake poop into a fake diaper for you to fake clean up. Have fun “playing.”) We don’t jump to these conclusions when it comes to any other skill. Women aren’t encouraged to be auto mechanics either, so most auto mechanics aren’t women, but only the most misogynistic dumbass would suggest that it’s because our tiny woman-brains are broom-shaped instead of wrench-shaped. The reason that people don’t respond well to women’s self-deprecating jokes is because they don’t read as jokes. They read as uncomfortable confessions. Because our society trains women to hate themselves.

Men are told from birth that their ideas are just as important as their bodies. Men are encouraged to be bold and loud—throw stuff at the wall and see what sticks over and over again—and that’s exactly where great comedy comes from. Comedy clubs are almost always run by men, and they’re safe spaces for men. I can’t tell you how many times I’ve heard a male host introduce a female comic by saying, “And here’s your obligatory girl comic for the night!” Any female comics who are bold enough show up have to sit through 87 shitty, “edgy” jokes about how they deserve to be raped and murdered for not liking video games enough. (A completely run-of-the-mill example I heard recently: “Last night I brought this girl home, but she was being really loud during sex, so I told her, ‘Sssshhh, you don’t want to turn this rape into a murder!'”) It is a deeply uncomfortable environment—and I say that not as a shy, funny girl at her first open-mic, but as a woman who’s already achieved a certain level of comedic credibility. And then the conclusion, when successful male comics outnumber successful female comics 10:1? Obviously it’s because women just aren’t funny. Not like my rape jokes! I’m a maverick!

So, I’m a woman, and I’m really fucking funny all the time.

I’m the person who this streak of conventional wisdom contends doesn’t exist. And in my experience, that’s exactly what being a funny woman feels like—it feels like you do not exist. (I also have a somewhat gender-ambiguous name, which means that I get frequent e-mails from readers assuming I am a man.) I spend a lot of my time hanging out with comedians, which means that I spend a lot of my time being ignored, not looked at, and talked over by men who are less funny than I am. To be heard, you have to shout, and when you shout, you’re a bitch. Being a funny woman is also extremely de-feminizing. If you don’t act “like a woman,” then you don’t count as a woman. Which, I suspect, is why so many female comedians lean on “woman jokes”—my vibrator! My mother-in-law! My vibrating chocolate mother-in-law!—rather than just telling, you know, human being jokes. Because we don’t want the boys to take away our woman-cards. And those are the women with enough faith in their own comic abilities to actually attempt stand-up comedy. Your average business-casual lady in the break room? Forget it.