A very happy Gay Christmas to us all, and by us all I mean my fellow Bravo Dykes, and by Gay Christmas, I mean “‘Tis The Season?”, the sixth episode of The Real Housewives Ultimate Girls Trip: Ex-Wives Club. The last time we touched down on the ex-wives, it was to discuss the science of lesbian eyebrows. And folks, I must admit I didn’t think it’d get much gayer than “lesbian eyebrows,” but here we are, at a Christmas party so homoerotic that my girlfriend and I had to keep pausing and rewinding in order to emotionally process what we just witnessed like the dykes and Bravo Dykes that we are.

It all begins when Dorina plans a “Christmas in September” party for the gals. As a reminder, Dorinda is one of those white ladies who makes loving Christmas her entire personality. Many a Christmas trip has been spent at her haunted Berkshires mansion, Bluestone Manor. And who can forget Nutcracker Gate? Speaking of that unhinged friendship fight, the first half of this episode is spent on a fight between Jill and Dorinda and its eventual resolution. As penance, Dorinda — who basically called Jill a vapid demon last episode for having cameras at her husband’s funeral — makes a vow to hug Jill every day for the duration of the trip. Does anyone point out that she makes this vow on the penultimate day of the trip? Nay. Jill seems happy enough with this apology arrangement.

So, yes, the first part of the episode is pretty gay in the Friendship Drama way. But the final act is gay in the Wait Are They All Going To Have an Orgy???? way. Resident bisexual Brandi Glanville arrives at the Christmas party in a sparkly champagne-colored dress. She explains she was supposed to wear it to the Beverly Hills reunion she ended up disinvited from as a result of her drama with Denise Richards, drama I have attempted to explain from various angles for this very website but that when distilled down to its simplest parts basically amounts to: Brandi claims she and Denise Richards had sex, and Denise Richards vehemently denies it.

A clip of a past episode of Watch What Happens Live interjects the scene, showing Brandi talking about Denise and how she never heard from her again after revealing the hookup on Beverly Hills. Back in the present of Ultimate Girls Trip, Brandi tells the other ex-wives that she feels heartbroken because Denise essentially just “hit it and quit it.” There’s not much by way of Brandi taking any accountability for potentially outing Denise, but we don’t really come to these shows expecting an abundance of accountability now do we?

“She’s got good eyebrows, too,” Brandi says of Denise Richards. We love a Lesbian Eyebrows callback.

Tamra Judge then chimes in to say she has known Denise for ten years and that she had a phone conversation with her in which she asked her point blank if she hooked up with Brandi. According to Tamra, Denise maintained her story that no she did not and that Brandi is lying. Despite knowing Denise much longer than she has known Brandi, Tamra says she believes Brandi’s side of the story (to be fair, Brandi is sitting right there when she says this, but ALSO to be fair, none of these women really have an issue with calling someone a liar to their face).

“Something happened at Bravo Con,” Tamra then teases. (For the uninitiated, Bravo Con is exactly what it sounds like…Comic Con but for Andy Cohen’s empire.)

“She hit on me, too,” Tamra reveals, prompting this reaction from Phaedra and a chyron disclaimer: 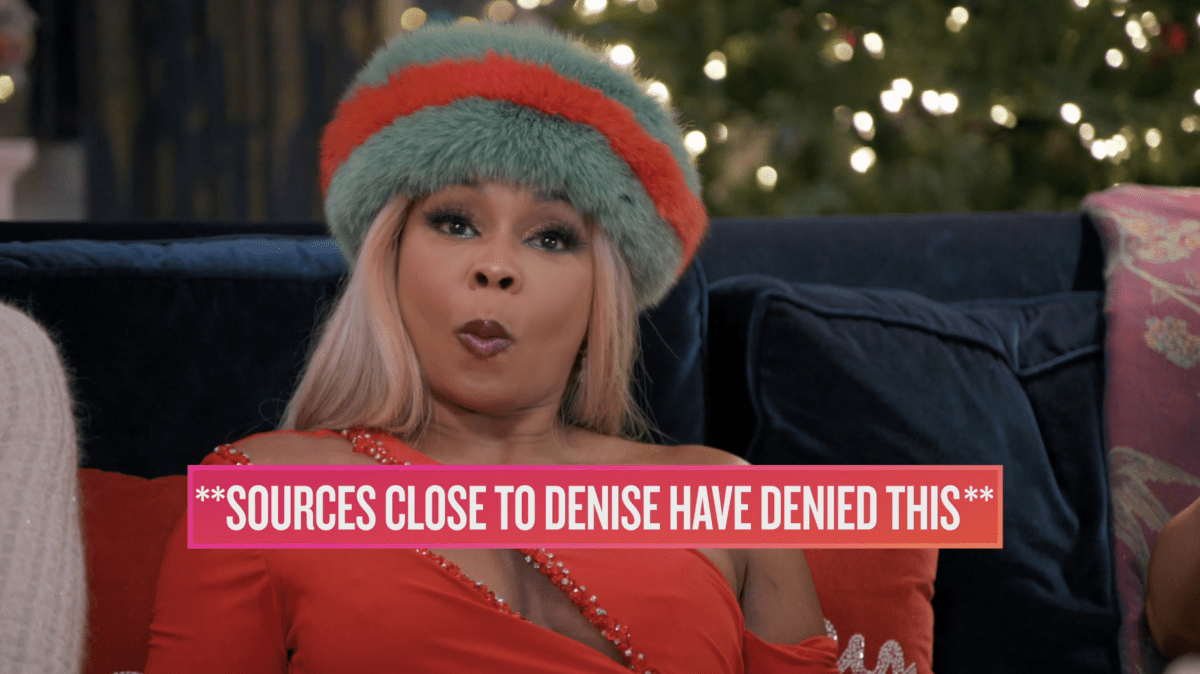 According to Tamra, Denise was hitting on her over text message and trying to get her to come to her hotel room. Tamra said she told Denise she’s married, which made me immediately perk up because Tamra did not turn Denise down by saying “I’m not into women” but rather “I’m married,” that that feels like an important distinction in my Bravo Dyke opinion!!!!!!!!!!!! And indeed, Tamra follows this up with this:

“I feel like Denise Richards is a very sexual soul, which she should be, she’s fucking gorgeous. And I’ve had my own experience with her and you know nothing happened but if I wasn’t married, I might’ve banged her.”

The queer Christmas shenanigans do not stop there. Tamra asks Brandi which of the ex-wives she most wants to bang. Brandi replies with her top choice: Phaedra Parks. But even though she’s the top choice, make no mistake: “I like to be at the top, but Brandi is the top,” Phaedra says later in testimonial. She adds: “I’ll just stay a versatile bottom.” PHAEDRA!!!!!!

Brandi also proposes that in order to avoid their worst fears of being alone when they’re old, she and Vicki should become friends who also *gestures eating pussy*. No really, she actually gestures eating pussy when saying she wants to be “friends” with Vicki, who then also gestures eating pussy when saying she’d rather just be friends. Brandi, frankly, needs to leave Vicki alone. Brandi often disrespects boundaries in that way that sometimes happens in queer spaces that people end up overlooking or excusing under the misguided and harmful assumption that queer people can’t violate boundaries or that it’s somehow different. Brandi, Vicki doesn’t want to sleep with you. There are at least two other women in the house who fully said they would. 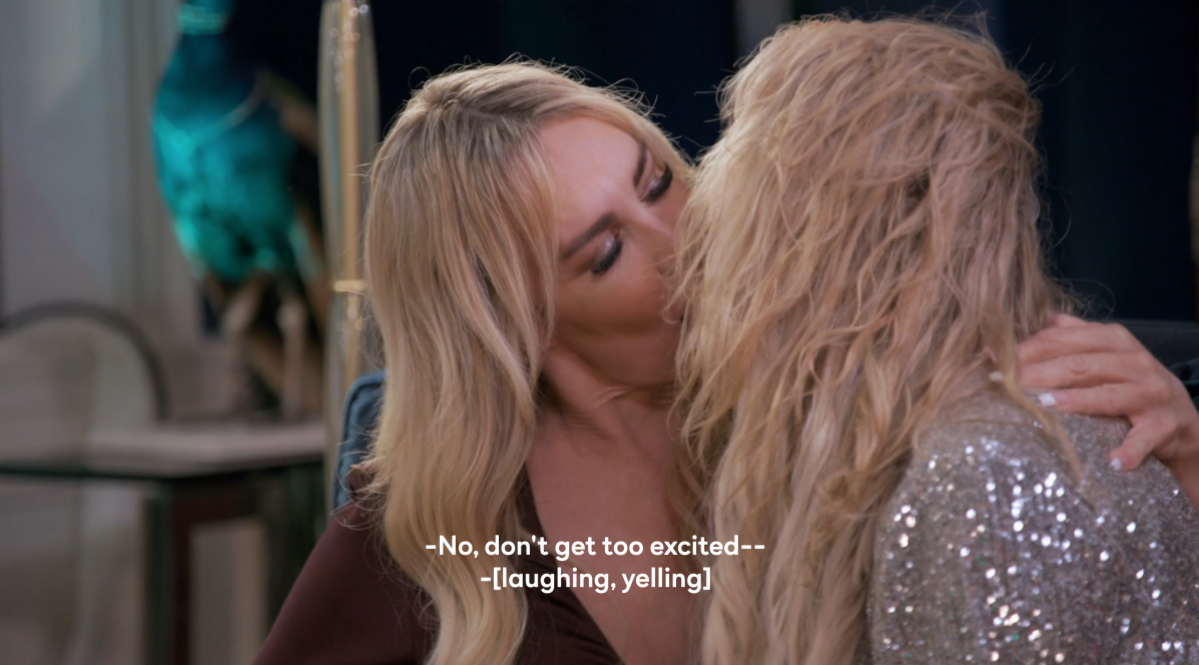 Then there’s Jill, who just wants a crumb of attention. She gets a little bit from Brandi, who perhaps feels bad for no one saying they want to sleep with Jill and so sits on her lap after the gift exchange. Jill quite literally spanks her bare ass, and I really do not think I’m that far off in thinking we were like half a step away from an actual orgy going down in Bluestone Manor? I think if Tamra were single, there’d be an off-camera hookup between her and Brandi that we’d then hear about after the fact on Watch What Happens Live or ~on the blogs~ as these ladies love to say.