Surprise! Your new least favorite fast food chain is not only homophobic — it’s sexist, too.

No? You’re not surprised? Me either.

Here’s what happened: on June 27, 2011, in Duluth, Georgia, Chick-fil-A General Manager Brenda Honeycutt was fired despite performance evaluations of satisfactory to above satisfactory. She was told by her supervisor, Jeff Howard, that she was being terminated so that she could be a “stay at home mother.” Honeycutt was excluded from the management meetings held to make this decision, and to make matters worse, she was replaced with a male employee.

Honeycutt filed a lawsuit in May of this year, suing Chik-fil-A for gender discrimination. The court document claims that throughout her employment, Howard “routinely made comments to the Plaintiff suggesting that as a mother she should stay home with her children.” The document also points out that this is a pattern, and names a handful of other female employes who were demoted and or terminated only to be replaced by men. 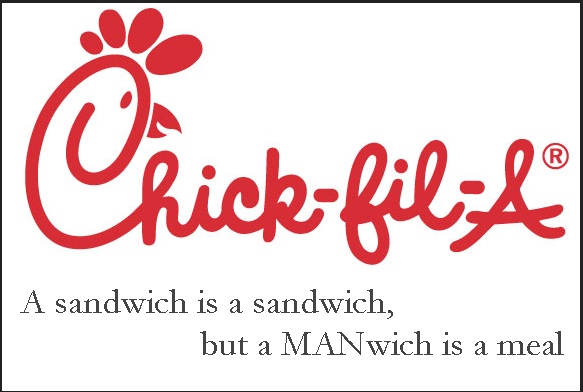 The root of homophobia, in many cases, stems from a fear of disrupting foundational gender roles. The idea that men should go to work while women stay home and cook/clean/raise the babies is turned upside-down and inside-out by queerness. If you want your women strictly feminine and your men strictly masculine, and you want your feminine women to depend entirely on your masculine men, there isn’t room for relationships other than straight ones. And straight relationships are further policed by having strict roles for women.

In my opinion, you can’t separate sexism from homophobia. Even though gender and sexuality are obviously two separate categories, queer sexualities upend the traditional gender balance that hateful scumbags like Dan Cathy and Jeff Howard hold so dear.

Last week, Riese questioned the prominence of the Chick-fil-A debacle on the national and queer activist stage, saying,

“The problematic aspect of the discourse around Chick-fil-A is that it isolates the anti-gay rhetoric and investments as its sole transgression — sign a petition to make him apologize for what he said so we can all go eat chicken sandwiches again! Yeah — not so fast.”

This latest addition to the list of reasons why Chick-fil-A sucks complicates matters since the opposition comes from someone who worked for Chick-fil-A, and who is suing for the right to be reinstated to her position.

I’m not about to judge anyone’s right to work where they want to. A job is a job, and most people have to take work where they can get it. But even if Chick-fil-A is court-ordered to reinstate Brenda Honeycutt, that won’t make it a safe space to be a woman. What about all of the other women who were fired for this same reason? What about the fact that firing a woman so she can be a stay at home mom is in line with the company’s core values? I’m sure that this won’t be the last we hear of problematic politics within the fast food industry. But maybe it’s time to we stopped trying to make them respect our rights, and turn our focus to supporting the institutions that already do.