I’m excited about the Olympics. I lived in Vancouver when we were The Most Important City in the World and I remember how great that was. Seriously, people were high-fiving and car-honking and Cheshire-cat-grinning and so gosh-darn friendly. It was a completely different city to live in! Maybe it was because everyone had a ton of national pride or maybe it was because everyone was sauced. Either way I want it! I debated repeating my Caesar-fueled Van-sperience, but a Canadian cocktail just doesn’t feel right for the London games.

Do you know what is appropriate for London 2012? 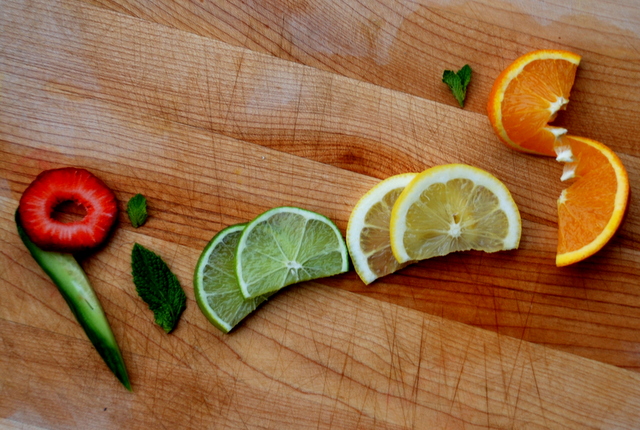 That says Pimm’s in case I failed as a food stylist. Via the Fooditarian.

It’s a quintessential British drink that shows up at Wimbledon, but oddly enough will be missing from the Olympics. Do a Brit proud and drink one on their behalf! Combined into a Pimm’s Cup, the drink brings all the summer-time fruitness of a sangria without the problematic red wine stains! (Trust me, they go down so easily that you’ll definitely appreciate that fact!)

Pimm’s O’Clock parties are awesome since they seem like you put in a lot of effort when you did no such thing. Have one for the Olympics since you can sit back and watch the athletes while everyone else mixes their own cocktails. You’ll still get the credit for having introduced your friends to a new drink, so gather your ingredients and get ready for a bloody good time!

A Pimm’s Cup recipe reads like an IKEA instruction sheet; it’s just a parts list. It’s less like bartending and more like coercing your friends into setting up your EXPEDIT. In the same way IKEA makes everyone believe they can make a cabinet, you can convince your friends that they can make a fancy cocktail. Unlike an actual assembly party, your guests will still want to be friends with you afterwards and you won’t end up with three leftover screws for your Pimm’s Cup.

Step 1: Mix your Pimm’s.
Mix one part Pimm’s No. 1 to one part Sprite in your largest container. Chill it in the refrigerator or load it with ice. (Note: Pimm’s Cup recipes call for lemonade, which probably makes you think of the yellow beverage sold by your neighbour’s kid for 5¢ a glass. Before you harass their stand, you should stop since the recipe really means “English-style” lemonade which is clear and carbonated. This will confuse the shit out of you until you Wikipedia it or talk to a Brit.) 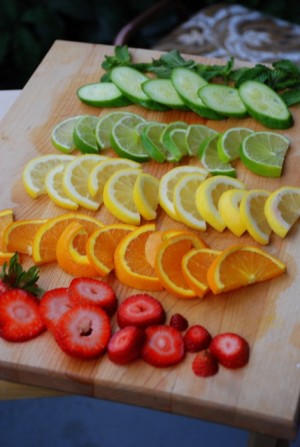 This looks way more impressive than it should. Embrace your somewhat undeserved compliments. Via the Fooditarian

Step 2: Prep your fruit.
De-stem your mint. Slice strawberries, oranges, lemons, limes and
cucumbers. You could mix it all up in a bowl or arrange them in artful
patterns to impress the ladies.

Step 3: Assemble.
Lay out the Pimm’s mix and fruit once guests arrive and have them take charge of their own glasses. Give them the instructions, “Fill your glass with fruit and top with booze. Remember to eat your fruit.” Hopefully they can handle that.

Step 4: Oh look! You’re done.
See? Now all of your friends think you’re a cultured mixologist. Your only responsibility for the rest of the evening is ensuring an adequate supply of mixed Pimm’s. Luckily the mix is easy enough that you’ll still remember the proportions well into your fifth cup. 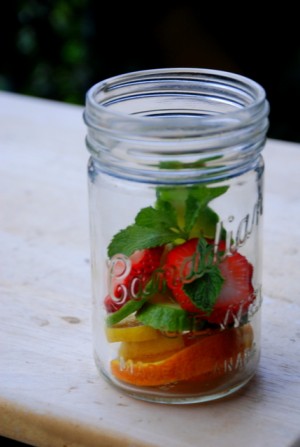 Give your guests wide-mouthed vessels so they can reach all of the boozey fruit. Via the Fooditarian.

Have you made it a few times and you want to try something different?

Purists may frown at these additions and substitutions, but let’s face it, they were probably going to scoff at your alcohol proportions anyways. The Classic Pimm’s Cup calls for a meagre 1:3 ratio of Pimm’s to sprite. This version is much more, uh, festive. I am all about the fun. 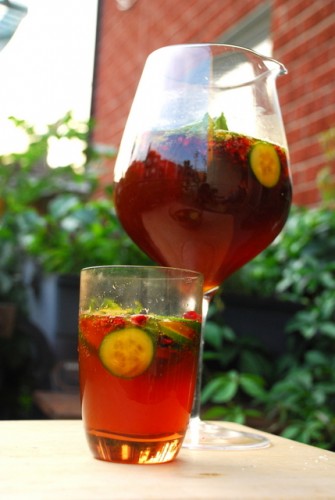 With a glass that size, no one will chastize you for pomegranate seeds. Via the Fooditarian.

So pour yourself a cuppa, turn on the telly to the games and have a jolly good time. Because you know what’s cheaper than a Transatlantic flight and an Olympics-priced cocktail? This.

Join A+!
Related:alcoholget baked with autostraddle