LAAAAADIES. Sorry, I was just trying to channel Charlene from that one show about real lesbian that happened before this other gross show about lesbians. What a week. British gal Hayley braved the L3 Convention just so that you could savor the awkwardness of it vicariously and Sarah/Miss April talked a little bit about lesbian’s favorite thing to eat (no.), vegan food! In Autonatic episode 8, Nat met up with her ex-girl-she-was-seeing in a park, Crystal wrote an open letter to Amanda Bynes, and Lily talked shoes shoes shoes. This week was the very first meeting of the Autostraddle Record Club, in which y’all discussed Janelle Monae’s “The Archandroid”, and over in Taylorland, she played Final Fantasy XIII, brought you highlights from the San Diego Comic-Con, and reviewed Inception. We had another special guest writer, Danya, who told us about the 1 year anniversary of Tel Aviv LGBT center shooting which you should check out, because it’s some nice writing.

And now on to the main event. If your name appears below, please send an email to yourmom@autostraddle.com to claim your prize: 10 fewer people to molest before you get your homosexual privilege!

The And Just of Touch of Rebound Award to Sasha Farce: “That Ready For Love kit looks pretty nifty. I would personally like to request a Not Ready For Love kit, which would contain a bottle of cheap tequila and maybe a pair of gloves.”

On Autonatic #8: Nat and Her Youthful Ex-Girlfriend:

The bcw Award for bcw to bcw: “I believe I see someone in that picture texting in a social situation. Also there’s a pickup truck. I read owl magazine as a kid, you can’t sneak that shit by me.”

The Gay Also Had Dibs on Your Name Award to Abbey: “I’m so glad to see Gay has called dibs on Nice Arms.”

The Pythagayras Award to Maryann: “I did some quick and dirty math, and if every gay person in America (conservatively estimating 2% of the population with the most recent census data for the total population of the US being ~307,006,550, not factoring in age) molested all 117 people that we are purported to on average (if you count other gay people as molestation targets too and you don’t count repeat victims), that’s ~718,395,327 people and twice the national population.
Clearly, we have to start outsourcing our abuse overseas to make that average. Productivity, my friends!”

[While you’re at it, check out the whole thread.]

The You’re Cute Award to K’s Mom: ““It’s not just holding hands and walking through tulips.”
DAMN STRAIGHT, GIRL. IT IS MAD, MAD DRAMA. PREPARE FOR TEARS, AND HORMONES, AND SLEEPING WITH FRIENDS. MOST OF YOUR FRIENDS.
On a more serious note, when I came out to my mom, she said “Oh, I sometimes think maybe when your father finalizes the divorce I’ll find some woman. That might be something worth trying. We could garden together, and she wouldn’t always be out in the garage working on her convertible.”Naw Mom, she’d be working on her Harley!”

The Alligator Pee is a Serious Threat Award to samr: “i hate tegan and sara! they were so good! every band that signs to sire records ends up sucking and producing the worst music EVER. fuck major record companies, they suck so hard.
i think though, that their one song, alligator, is the most hilarious song in the whole world and i just want to drown them in alligator pee.”

The No! Award to EpicCrayon and e: 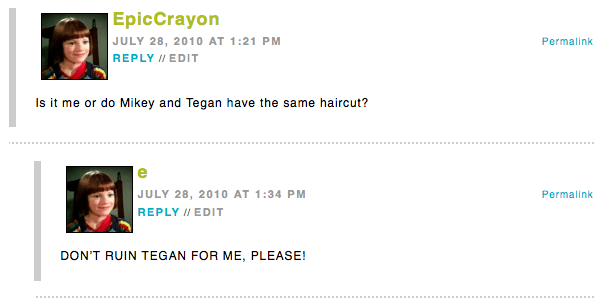 On How Many Studies Must Gay Parents Win Before They’re Free to Adopt?:

The But Mom! Award to Vikki: “Just don’t ask my daughter if lesbians make good parents – she’s still angry about being asked to clean her room and thinks I’m the “WORST MOM EVER!””

The Award for Reading my Thoughts re: Taylor’s Posts to Eh and EpicCrayon: 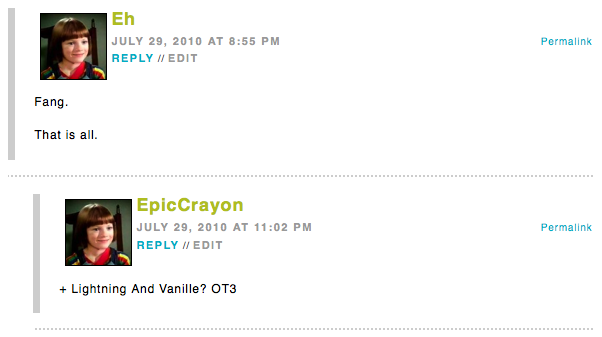 On CBS Gays Up, Invents 3 Homosexuals to Fill the Void GLAAD Rated:

The True Life: I’m a Soup Chef Award to Mindy: “I think Lauren Lee Smith should be a lesbian in the reality show called:
“True Life – My name is Mindy and Lauren Lee Smith and I are in Love””

The You Should Just Wear Tighter Pants Award to TSwizzle: “I wish I could invent 3 homosexuals to fill the void in my pants.”

The Maybe You Shouldn’t Molest Them, Then Award to jenn: “funny how all the homophobes have SO MANY gay friends, and i have um three at the most and one of them is my girlfriend?!”

The Quacker Factory Award to e and Sarah: 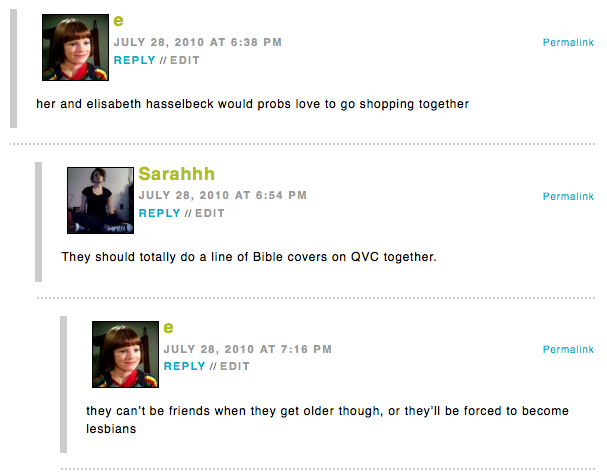 The “I hate that shit. I came here to learn not watch a performance.” Award to me: ““Simply put, the university is imposing thought reform.”
That’s called teaching.”