1. You actually can tell the difference between pumpkin pie filling and actual pumpkin, and between store bought crust and from-scratch crust. Guess which is better.

2. You do not need a blender or food processor or other fancy cooking things. You might want hand beaters so you can use real whipped cream instead of from-a-can whipped cream, but technically, you can whip it by hand.

3. It actually tastes good as leftovers. 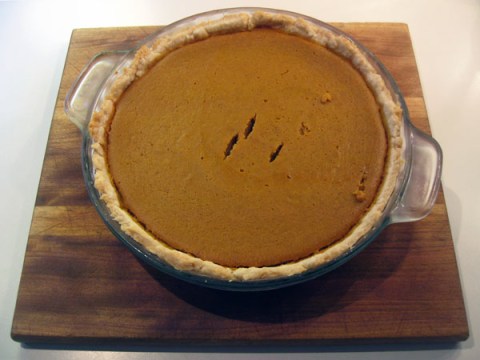 For the Crust (will make a 9-inch single crust)

1. Combine the flour and salt in a mixing bowl.

2. Cut in the shortening with a pastry blender or two knives until it has the consistency of cornmeal (smaller than peas, bigger than quinoa).

3. Sprinkle on the cold water, a half tablespoon at a time, tossing the mixture lightly and while stirring with a fork. Each time, add the water to the driest part of the mixture. The dough should be just moist enough to hold together when pressed with a fork. It should NOT be sticky. If you add too much water, you’ll have to add more flour to fix it and then the water:shortening ratio will be destroyed and even if your filling is the best in the world, it will not save you.

4. Form the dough into a ball with your hands. It does not need to be perfect. Make sure to touch the dough as little as possible — the more you handle it, the tougher (and less delicious) it gets. If you are not ready to actually make the pie, wrap the dough in waxed paper and refrigerate it (preferably for some time later that day).

5. Next, we’re going to make this thing look like a crust. The best place to roll out your dough is on a cold marble countertop, and the worst place is on a plastic cutting board next to the oven, because the fat in it will melt. I used wax paper sprinkled with flour on the kitchen table, and covered with a bit more flour and another sheet of wax paper. In any case your surface needs to be lightly floured. Using a rolling pin or corked bottle of whatever you’ve been drinking to get through this, roll the ball of dough lightly from the centre out in all directions to a thickness of 1/8″ (for a 10-11 inch circle). Lightly fold the resulting circle in half and ease it into the pie pan, with the fold in the centre. Open it, and gently press out the air pockets using your fingers. Gently fix any rips or holes. Fold the extra edges under, trim off any gross miscalculations in the shape of a circle with a knife, and use your fingers to crimp the edges. Refrigerate until ready to fill. 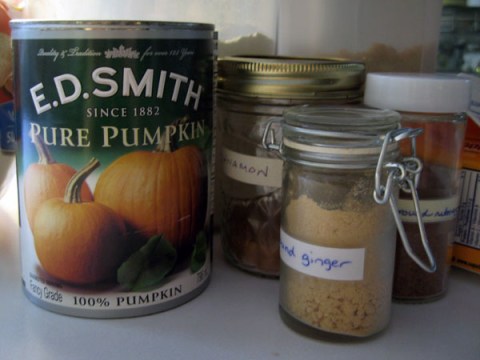 1. Beat the eggs lightly in a medium-sized bowl. Add the pumpkin, sugar, cinnamon, nutmeg, ginger, and salt, and stir until combined. Add the milk and stir again until well-combined.

You might be in the store and looking at whipped cream, and you might decide that cool whip is the way to go, because it’s super easy and (I don’t think) ever expires. But you need to resist those thoughts, because actual whipped cream is delicious.

1. Before starting, refrigerate both the whisk or blender beaters and the bowl. If you are going to whip cream with a whisk and your arm muscles, it’s best to use a metal bowl and the biggest whisk available. It is also best to make a lot of comments about what else you can do with those arm muscles, particularly if the lady you may or may not be making the pumpkin pie for is nearby.

If you have a eggbeater:

2. Beat the whipped cream until stiff peaks are just about to start to form. If you have never whipped cream before, that sounds confusing, but as you do it you’ll see what I mean.

3. Add the vanilla and icing sugar and continue to whip until stiff peaks actually form, and then stop, or you will start to get butter instead of whipped deliciousness.

If you are using sheer will:

2. Tilt the bowl slightly and beat the whipped cream at about 3 beats a second. Use longish strokes — the goal is to fold air into the cream, not to just stir it as fast as possible.

3. When it starts to get a little fluffier, add the icing sugar and vanilla. It is actually best if you keep whipping while someone else pours them in for you. Whip until stiff peaks start to form. This should take between three and ten minutes total, depending on everything from you to your whisk to the humidity.

4. Apply liberally to individual slices of pumpkin pie and serve. 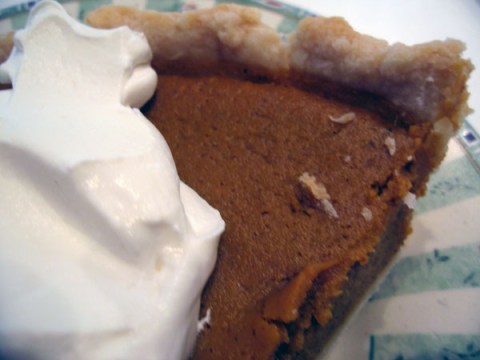