Back in the second ever installment of Drawn to Comics I wrote about this really amazing queer comic anthology that had just been announced. It was going to be edited by Sfé Monster and its goal was to create a comic anthology full of “science fiction and fantasy exploring and showcasing queer characters, themes, and relationships, from a broad spectrum of world-class creators.” Now I’m back and here to tell you that they succeeded in their goal and Beyond: The Queer Sci-fi and Fantasy Comic Anthology is full of some truly remarkable, beautiful and terrific comics that show queer people of all different kinds being the heroes of their own stories. 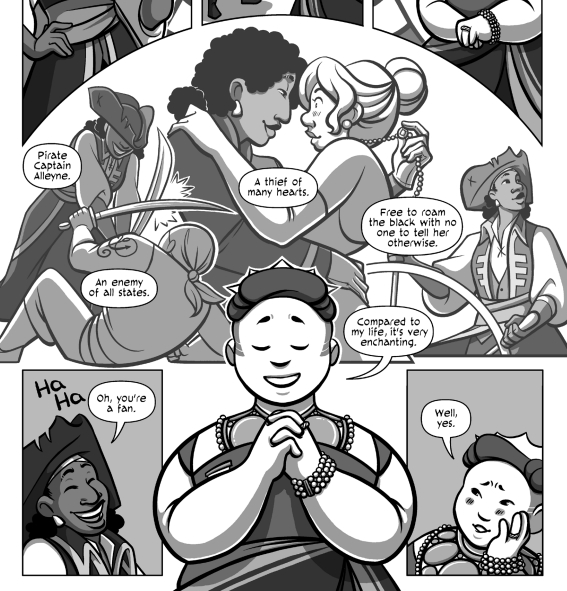 From “A Royal Affair,” art by Christianne Goudreau.

In this anthology you’ll find sci-fi and fantasy comics of all kinds. There are comics about ghosts, dragons, goblins, aliens, robots and even alien robots. It also features queer characters of all kinds, there are protagonists of all genders (and no gender), all sexualities and across different body types, ages and ethnicities. For example, in “Luminosity” by Gabby Reed and Rachel Dukes, the world’s greatest astronaut, who happens to be a Black woman, and the person who has the power to get her ship to a distant planet orbiting Alpha Centauri B, another woman of color, fall in love as they grow up and eventually explore deep space. “A Royal Affair” by Christianne Goudreau and Taneka Stotts (who also was the Assistant Editor of the anthology) features The Regent of Calofi who is at a coronation event where they will announce whether or not they choose to be king or queen. They’re not the only queer character in the story, though, as a queer pirate captain crashes their party and the two talk about responsibility and the roles they chose.

The stories just continue to get queerer and more terrific from there. Savannah Horrocks and April J. Martins’ story, “The Monster Queen,” features a human princess angry at her parents for putting up posters that say “Trust Not the Monsters for they are the Enemy” and the Monster Queen she falls in love with. It’s pretty cute and a great story for anyone who’s a fan of fairy tales. “They Simply Pass” by Kristina Stipetic is a charming story in a strange setting about a race of robot aliens with two “genders,” Transmitters and Aggregators. The two come together, with the Transmitter contributing her code, and the Aggregator laying eggs, then the Transmitter leaves town and passes away. One Transmitter, Lacuna, doesn’t like this and figures out a way to change it, no matter how their society will react. Other stories that stood out to me include “The Next Day” by A. Stiffler and K. Copeland and “The Grave of Wolves” by Ted Closson. 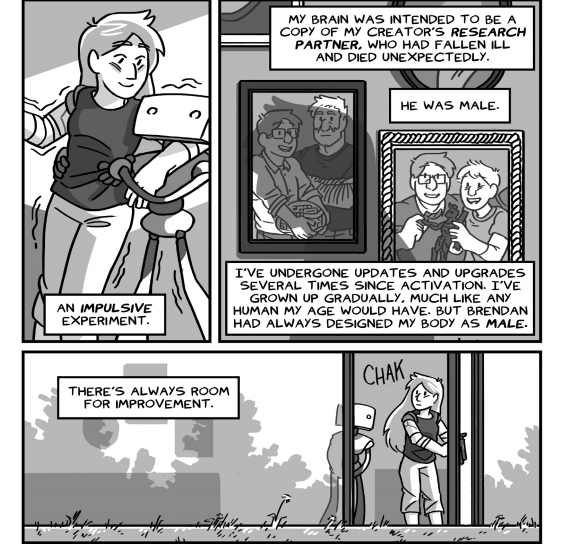 From “Optimal” by Blue Delliquanti.

“Optimal” by Blue Delliquanti is maybe my favorite comic in this book. I hope that you’re all already familiar with the webcomic O Human Star; if not, please go read it right now. This comic is a short prequel to that and it is downright adorable, not to mention just being really beautiful and subtle storytelling. I really love the way Delliquanti draws Sulla; she’s drawn as being a perfect adolescent mix of hopeful, awkward, precocious and nervous, and it really helps to sell the story. It focuses on Sulla, a robot clone of her creator/father’s deceased partner, both in the robotics industry and in life. However, as this comic shows, she’s not exactly the same person, and while she was designed to be a male robot, she’s trans and is actually a girl. Seeing how happy Sulla is after she gets her first body upgrade to a body that she feels comfortable in is so wonderful, and Brenden’s words at the end make me tear up every time I read it.

Another favorite is “The Dragon Slayer’s Son” by Monster (the editor) with inks by B. Sabo. The art in this one is beautiful (as are all of Monster’s comics) and the world they’ve created is super fascinating and filled with wonderful details that makes the world feel deep and full. A trans mother and her trans son are both from a clan of dragon slayers where you become a man by slaying a dragon, so the son wants to do this. This is about challenging traditions and forging your own path, and the end also makes me cry. The third comic that really stood out to me was “Barricade,” written by Alison Wilgus with art by Anissa Espinosa. It’s about a lady astronaut rescuing her astronaut girlfriend and it’s the most heart-pounding story in the book. I especially love the art on this one, it’s dynamic and exciting and full of wonderful details and really terrific facial expressions. 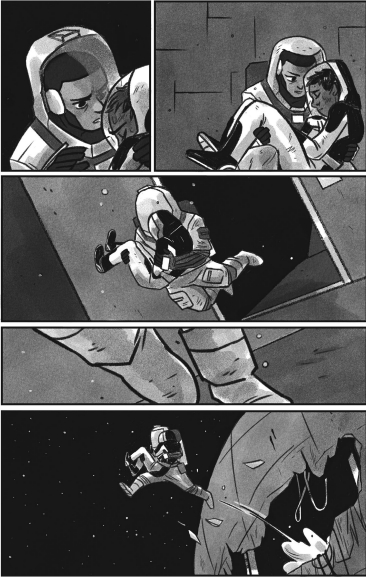 From “Barricade,” art by Anissa Espinosa.

This anthology is just so, so gay, and that is terrific. LGBTQ readers so rarely get queer-normative spaces, and so to have an entire book full of comics where people casually use “they” or “xe” pronouns, where women make offhand mentions their girlfriends and where trans people can just matter-of-factly be trans, is just wonderful. Monster has already said that they’re looking forward to the next volume of Beyond, which will focus on urban fantasy and post-apocalyptic stories, and I’m looking forward to it too. Beyond: The Queer Sci-fi and Fantasy Comic Anthology features around 20 black and white comics and is over 270 pages long. You can buy copies, both softcover and pdf at the Beyond Press website.