ChaosLife, one of the many comics made by A. Stiffler and K. Copeland, gives us a look into the life a really cute queer couple. It’s funny, politically and socially savvy, at times touching and always clever. Whether they’re detailing the hilariously relatable behavior of their cats, pointing out how ridiculous nature can be, or just showing us glimpses into their lives, they always know how to keep your attention. This comic tells stories from the lives of an agender person (Stiffler), their wife (Copeland), and their cats Konstantin and Peter.

I first came across ChaosLife when I saw their amazing drawing of Batman putting on fabulous eye makeup before donning the cape and cowl. I was totally won over when I checked out the comic and continued to read the thoughts and ideas of Stiffler and Copeland. The way they capture the complete absurdity that is having a cat as a pet is so perfectly spot on, it’s a little scary. The way they explore gender and queer relationships is funny and sometimes cute, but always real. No matter what the subject matter, the thing ChaosLife does best is the way it really makes you want to be friends with this couple and get to know them. I was lucky enough to take the first step in that direction when I had the chance to interview Stiffler and Copeland about the comic and where they’re coming from when they make their comics.

First off, can I have a bit of a background as to how you got into making comics? What comics and creators do you enjoy and get inspiration from?

It was really a drive to illustrate complex characters and the dynamics of their lives, something that can’t be expressed by a stray illustration or painting here and there. We also wanted to create stories that we hadn’t seen in comics before, like our own. Some of the comics we like to read include The Sandman, Blade of the Immortal, Calvin and Hobbes, Doonesbury and Johnny The Homicidal Maniac. We’re a bit old school, but we definitely enjoy the newer comics that are being put out, if a bit infrequently. As far as creators go, we’ve been inspired by Jamie Hewlitt, Neil Gaiman, Hiroaki Samura, Bruce Timm and Nanae Chrono. They’re all creators who really pushed the envelope of their genres and left lasting impressions upon the comic world.

When did you decide to start making comics as a job?

We first started making comics in earnest early 2011. We honestly didn’t expect for it to be a full-time job, but fate had other plans and we wound up busier and more passionate about our full-time comics career than ever before. 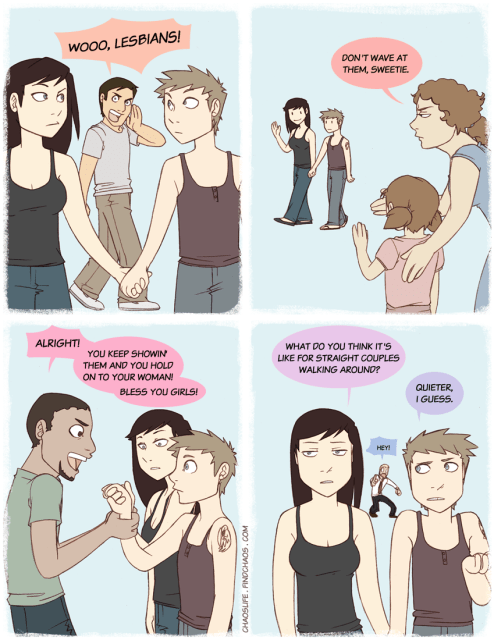 A lot of your comics are fictional, so how did you decide that you also wanted to make autobiographical comics?

While the non-autobiographical comics were our first pursuit (and passion), we found ourselves in a bind when we wanted to talk about our own lives or something more humorous, political or GSM-related that didn’t fit within strict story lines or short comics. Because of that, we started posting autobiographical comics on Reddit and since they had such an overwhelmingly positive reception, we decided to make a space for them permanently on the web. In a sense, ChaosLife was born. 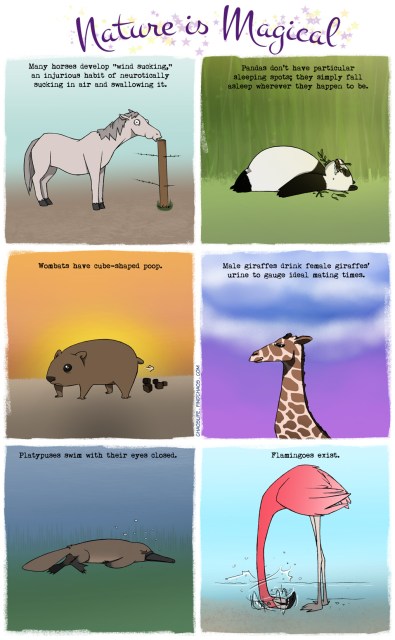 Now, several of your individual comics have really exploded in popularity, what has that been like?

A little surreal! There’s no rhyme or reason to which of our comics become viral. Sometimes it’s because of a reference to popular culture, whereas other times it’s because of something personal to us that just happens to be very relatable or humorous to the masses. Since it’s so unpredictable, it’s still very exciting every time that it happens. We get our fair share of hate mail for our gender/sexuality once they become public knowledge, of course, but them’s the breaks. We try to keep it in perspective with all of the supportive messages, too.

One of your comics that I see reblogged on tumblr all the time is your Sleep Kama Sutra series. Is it a little weird to know that there are drawings of the two of you (even ones that you did) in such an intimate place plastered all over the internet?

At this point, not at all! Through our various social media platforms, we’re both fairly transparent about our lives, even the most intimate parts. In fact, we are about to be contributors to Smut Peddler 2014, which means sex and other intimate topics are hardly taboo in our line of work! So, in essence, we aren’t really ashamed to share even the most intimate details. While some people might see this as exhibitionist behavior, we see it as setting an example for positive views on the natural parts of life; whether that’s sexuality, gender or simply the average human experience of trying to sleep with a cat in the bed. 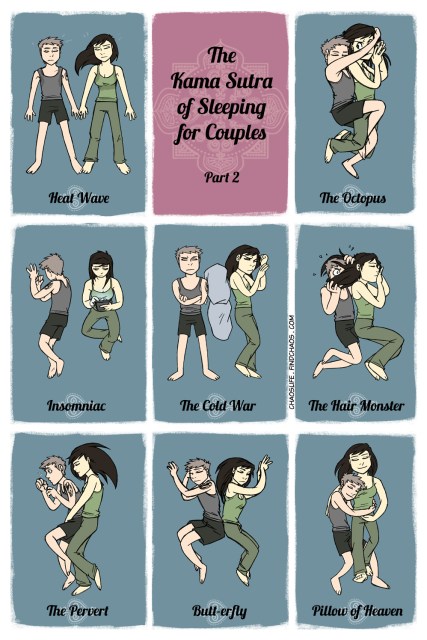 You also touch on some other very personal issues, including A.’s gender (or lack thereof) and K.’s paranoid schizophrenia. How did you decide that you weren’t going to shy away from talking about those kind of issues?

As mentioned before, we made it a point to try to be positive examples. Even in our fairly enlightened generation, there is a lot of stigma around many personal issues, such as mental illness, sexuality and gender. There simply aren’t enough positive and empowering examples out there right now and if we could bare ourselves to the internet and provide that sort of outlet or explanation so others didn’t have to, it seemed like a worthwhile endeavor. That’s not to say that we didn’t have caveats about it, but weighing the pros and cons, we could see what was right. After all, we both have fairly thick skins and can take the sort of hatemail and ire that sort of openness generates. And in the meantime, there are also letters of support and thanks from others that are enlightened, empowered and some who have been alright with themselves just by seeing someone out there living the same lives. Whatever happens in the course of our comics and lives we’ll always be thankful for all of the people who have written in positively affected by the work we have put out. There’s really not much else we could ask for.

After talking to them, I found myself enjoying these comics even more. If you’ve never read it before, or maybe you’ve only seen the occasional strip on tumblr or reddit, you should definitely check it out all the comics going back to 2011. If you enjoy them as much as I do and want to own a piece for yourself, they have a bunch of products that you can buy, whether you want a Kirk and Spock same-sex marriage shirt or a Cats in Ties print. The couple lives in Columbus, Ohio with their two cats and new pet snake, and the comic updates usually once a week.