It happened exactly one year ago: I was checking some sort of news site, probably Haaretz, excited about spending next spring studying in Israel. Then I saw the headline: a shooting at a Tel Aviv LGBT community center. I was shaking as I clicked on the article. A masked gunman had entered the center during a weekly support group and opened fire with an automatic weapon: 15 injured, and two killed, later identified as 26-year-old Nir Katz and 17-year-old Liz Trobishi.

My heart plummeted to my stomach. It happened in Tel Aviv. Some random gay-hater was able to stroll into an LGBTQ center in one of the most strictly secured countries in the world and blow away two young people. I wished that they’d been armed, like so many young people in Israel are, so that they could’ve fought back. I seriously considered canceling my trip; partially out of genuine concern for my safety but mostly because I was so angry, and sad.

The next morning I got an email from my friend Iah who’d been in Tel Aviv when the shootings happened. She told me how scared everyone was in the Tel Aviv scene that night and how angry she was at the discriminatory treatment she felt the crime was getting from both the media and the police and how that night, everyone from the Tel Aviv gay community had come together and marched through the city holding candles and shouting slogans of solidarity to “take back the night.”

Although Iah felt safe while marching with the LGBTQA group that night, she didn’t feel safe leaving her house the next day. I was near-tears already, but I totally lost it for a good fifteen minutes when I read: “Fear is insidious and creeps inside us, making us believe we aren’t as good they are, that we aren’t as safe. We are as good as they are. We deserve to be safe, but right now, in this world we live in, ONE man with ONE gun can change a city and a country and a family.” 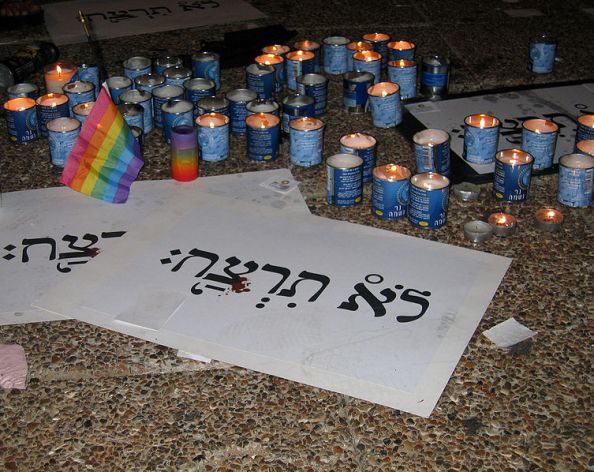 Last night, on the one-year anniversary of the shooting, many LGBTQ Israelis and their allies are marching in Jerusalem’s צועדים לשוויון, or March to Equality, from Gan HaAtzmaut to the Knesset, the center of Israel’s government.

According to an interview with Haaretz from one of the organizers, the march sought to “display all the places where we are discriminated against, and our work plan designed to change [the situation], and we will call for the establishment of a gay lobby in the Knesset,” as “the first step towards full equality.” This is the first time that Jerusalem’s pride parade plans its route to include the Knesset, a clear symbol that Israel’s LGBTQ organizations are increasingly focused on entering the political spectrum.

Tel Aviv has a relatively long, steady reputation as being a more secular and liberal city than Jerusalem. Jerusalem leans increasingly ultra-Orthodox and has been the epicenter of the region’s political tension for centuries and therefore unsurprisingly its pride events have a tumultuous history. In 2005, a religious zealot stabbed three marchers and in 2006 the parade was canceled. But pro-Israel activists rightfully point towards Tel Aviv as a symbol of the relative freedom and vibrant scene enjoyed by GLBTQ in Israel, particularly in comparison to the rest of the Middle East.

The gunman, who has still not been found, challenged this image when he took the lives of two LGBTQ youth last summer. I know hate crimes happen all over the world, even in the U.S., all the time. But this one hit home for me because my friends had been close to the attack and because everything about the “bloodbath” seemed shockingly pre-meditated.

I didn’t cancel. I went.

I had the time of my life in Israel and was grateful for every day of the nine weeks I spent on Israeli soil, under the Israeli sky. It’s a beautiful country, both in landscape and culture, I’ve never felt more at home and I hope to eventually move there permanently.

However, while in Israel, I often thought of the shooting and Iah’s email and I couldn’t always feel safe. In Jerusalem I largely avoided the LGBTQ scene for a few reasons including “fear of being targeted by violent zealots.” The closest I got to any such scene was when I joined “Women of the Wall” for prayers at the Western Wall. It wasn’t a queer-oriented event, but it sure felt like it was when an angry man yelled at us over the mechitzah, calling us “lesbians” as if it were an insult (though most of the women were probably NOT lesbians).

In Tel Aviv I went out a bit and felt secure once I got used to the environment and observed regulars having a good time and feeling safe. In the states I’m still underage, so Tel Aviv was my first experience of a queer scene outside of my University’s bubble.

It was new and different and strange but also good. I was finally feeling comfortable with my identity and after one particularly fun, but also perplexing night out in Tel Aviv I woke up and went straight to the Mediterranean to walk and think about my Very Important Feelings. The first feeling I felt, however, was fear, like the one Iah had described in her email.

For some reason, Tel Aviv at daytime is more intimidating than the jovial, inviting and Arak-tinted nighttime bar town I’d come to feel comfortable in. I realized I’d be frightened to walk along the beach holding hands with a girl here. What if that psycho who killed Nir and Liz was just walking around somewhere saw me and got offended and shot me, too? Here, making a visible sign of affection towards someone of the same gender wouldn’t be just a manifestation of your feelings for that person, it would also be a political commitment and a risk.

I felt utterly terrified for a few minutes, staring at the Mediterranean which was so beautiful in stark contrast to the ugliness of that brutal hate crime. Then I decided to catch my bus to Tzfat, where I’d flee this confusing intersection of fear/freedom and be up in the mountains, where mysticism promised to hold the answers I was seeking.

My perspective on queer identity and relationships hit a turning point that morning. This was ME, this is who I am, and now it was time to face knowing that I no longer had the privilege to ignore the political implications of my sexual identity. Queer wasn’t just a preference in partners for Nir and Liz, it was a death sentence. Holding hands, in this context, wouldn’t just be an expression of affection or love. In Tel Aviv, now, it’s not just “I love you,” it’s “I love you, and would risk my life for you.”

The last sentence of Iah’s email read: “Tell someone you love them.” 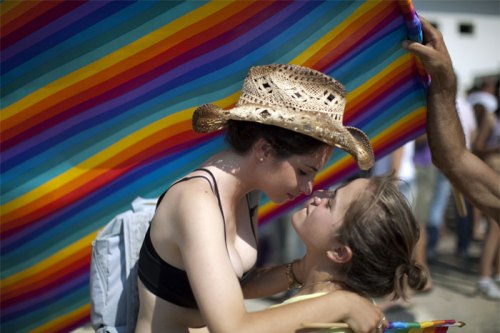 *Name has been changed until Danya finds out if it’s okay to use her friend’s real name.