Showtime had their day at CBS’s TCA panel yesterday. You know what that means… Dexter! JK, I hear it’s a great show, they’ve got a script and everything. 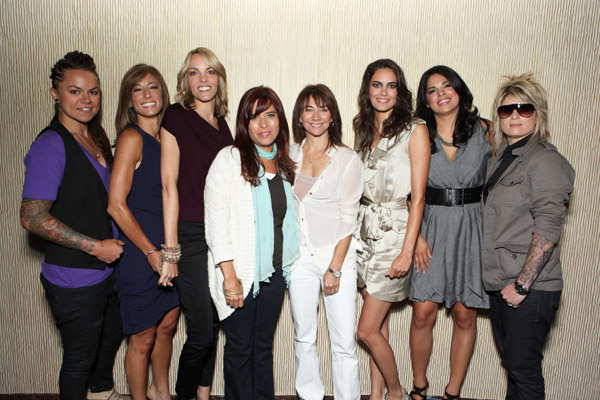 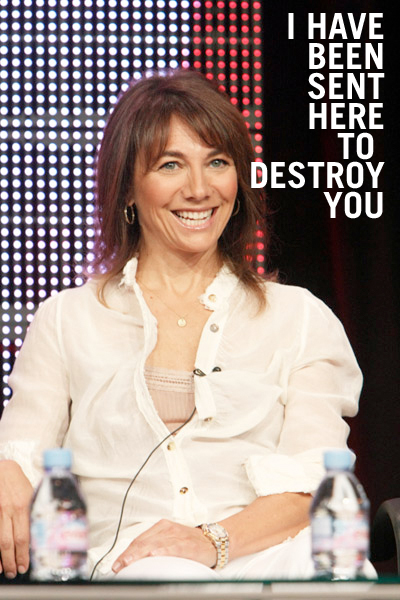 The LA Times Reports on how those gay ladies felt about Elisabeth Hasslebeck’s feelings about late-in-life-lesbians:

The cast of Showtime’s reality show about a group of lesbians who live in Los Angeles brought up Hasselbeck’s comments during a panel session for the show.

“Ignorant,” said Nikki Weiss to start off the discussion.

“I was gonna say something a little less PC,” added Rose Garcia.

Weiss: “It’s amazing that she has such a big platform for such an ignorant woman.”

Then they wondered aloud if Hasselbeck would soon call them and apologize, and said they’d respond by asking her out on a date. 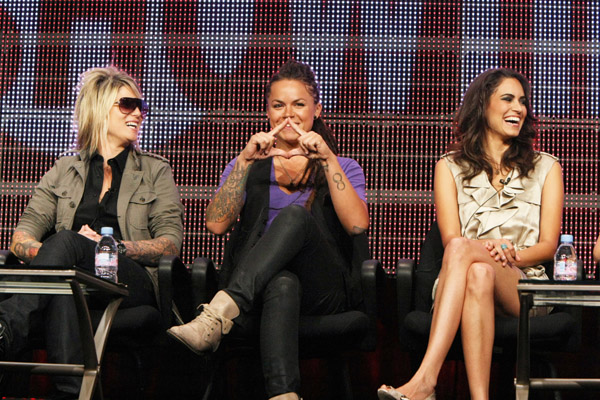 Obviously those lucky bitches from AfterEllen were totally THERE. G-D THEY GET TO DO EVERYTHING. At least they can’t come to my pool party this weekend.*

Here’s our favorite parts of Trish Bendix’s live-blog, helpfully copy-pasted for you:

Showtime introduces the room to the reality show by calling it “a raw and unscripted series about high profile lesbians.” They also call them “attention-getting and unpredictable.” Cue clips of an upcoming episode filmed at Dinah Shore where Sara and Romy are making out in the pool, much to Whitney’s surprise, and Natalie is running away from Rose screaming, “Rose, leave me the f–k alone!”

Showtime says that The Real L Word brings in the highest number of web hits for any Showtime series and has the most video views on Sho.com. With a season finale coming up in three weeks, it does seem odd that they have a panel on the docket today. So one of the first questions for creator Ilene Chaiken was if she is hoping to have a new season picked up since it is still undecided.

“I’m never confident. Nothing is done until it’s done,” she said. “I’m very hopeful. There’ve been changes at Showtime so we’ll have to talk and see what everybody’s thinking.”

The reporter noted that she didn’t seem very confident.

Also, it seems that Episode 7 will be the legendary “strap-on episode”:

“Episode 7 will make up for 1 through 6 not having shock value,” Rose said. “There’s one word for it: Epic.”

Said Whitney: “Episode 7 is pioneering on many levels.” Yes, this is the strap-on episode.

Well, as you can see in our NSFW Sexy Sunday Strap-on Day Edition video, it won’t be the first strap-on scene in television history. So perhaps Whitney’s referring to actual pioneers, which could be fun. Always figured Laura Ingalls Wilder could get a little kinky.

Anyhow, there were lots of panels, very big deal. You can tell important things happened, ’cause everyone is talking with their hands: 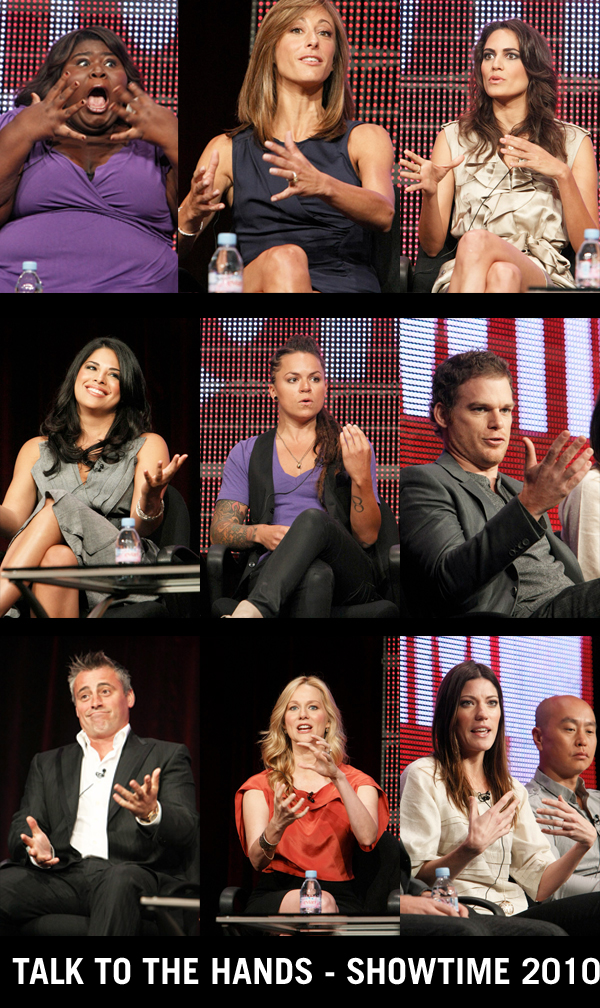 So basically here’s a round-up of everything that happened on the TCA Tour, which I guess judging by the press coverage is about equivalent to a Presidential Election or the Superbowl.  It was such a big year for the gays with the CBS peeps, oddly.

Oh right I almost forgot, there’s gonna be a new Mommy show starring Sara Gilbert, who according to the mainstream press, came out today! Congratulations mainstream press on noticing Sara Gilbert coming out like years after she actually did, ya numbskulls. She’s been in an openly lesbian relationship with Allison Alder since 2002. Have you seen this awesome Roseanne tumblr?

You know how we are provided with important insights on ordinary things by watching celebrities do them? Soon we will get to do this with motherhood! Now lesbian Moms will have their date with daytime again:

CBS has announced it has ordered a new daytime talk show co-hosted by Julie Chen, Sara Gilbert, Sharon Osbourne, Holly Robinson Peete, Leah Remini, and Marissa Jaret Winokur for the upcoming fall season. The format of the show will resemble The View, with the co-hosts discussing various current events but from a motherhood point of view, CBS says. All of the hosts have children who range in age from infants to adults.

This would not be exciting except that it features a Real Life Lesbian, Sarah Gilbert, who’s also the show’s executive producer. Maybe this will be a representation of lesbians on teevee that doesn’t force us to invent drinking games! MTV hopes it doesn’t get too political, go into too many details about the kids’ lives, or use “mommy” in the show’s title. 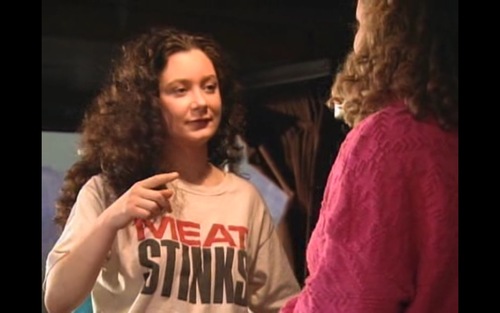 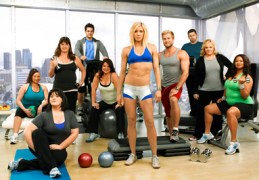 Jackie Warner’s new show, Thintervention, will premiere on Bravo on September 6th to make you all feel sad about your abs:

In Thintervention, Warner of the Bravo series Work Out will do what she does best – kick butt and inspire drastic lifestyle changes for her overweight clients who are struggling to lose weight and get healthy for good. Warner will push them to their limit at her gym and inspire them with intense workouts at amazing locations. Not sent to a weight loss camp or facility, instead Warner works with them in their real lives surrounded by the everyday distractions and stresses of family and work, making the chances for long-term success greater. Progress will be checked through group therapy and daily weigh-ins. Warner will do whatever it takes to keep her clients on track – even if it means surprise ambushes at their homes, work or when out socializing.

The most exciting part of this show, besides that Jackie Warner is nice to look at, is that our friend Craig Ramsey is Jackie’s right-hand man. “I swear, if he didn’t bat for the other team,” says one of the shows contestants in a preview, “I’d scoop him right up. Scoop him RIGHT UP!” So that’s what we’re going to think about instead of why Jackie grew out her hair, is how excited we are for Craig!

Ellen is too busy to be on American Idol duh! But she did it anyhow but now she’s “not doing American Idol anymore.” So there goes Fox’s GLAAD rating, they better make Santana & Britney make out. Anyhow J-Lo is gonna take her place probs. But Ellen’s reason is sort of perfect, she said that while she “loved discovering, supporting and nurturing young talent, it was hard for me to judge people and sometimes hurt their feelings.”

* I’m not having a pool party this weekend, I don’t even have a pool!