Back when the third season of Good Trouble debuted, I lamented that the show opted not to address the pandemic at all. I thought ⁠— and still think, if we’re being honest ⁠— that there was no show on television better prepared to tell the story of this moment than this one. But even though the show’s never mentioned COVID-19 outright, it has tried to capture some of what the last year of the pandemic has wrought: the heartbreak, through the break-ups of Callie and Jamie and Mariana and Raj; the upheaval, through Callie, Mariana and Gael’s changes in employment; the uncertainty, between Davia and Dennis and Malika and Isaac. It’s also grappled with Dennis’ grief and his separation from his life at the Coterie. We’ve seen Malika’s trauma and anxiety come to the fore, as the vengeful justice system she’s been fighting turns its attention to her. It’s not the same, of course, but those things ⁠— the heartbreak, the upheaval, the uncertainty, the grief, the separation, the trauma ⁠— have been real parts of our lives over the last year and it’s interesting to see the show center those feelings and experiences, even as it doesn’t acknowledge the pandemic directly.

“Klompendansen” continues with that tradition, only this time Good Trouble isn’t focused on a feeling that’s resulted from the pandemic, it’s focused on a need: comfort.

At the moments when everything else in the world feels unpredictable, we crave comfort, we long for the moments where everything felt familiar. That’s why my salve during the pandemic hasn’t been new shows, it’s been revisiting old ones: things that I’ve watched over and over again. There’s comfort in laughing where I’ve always laughed, in knowing when the scary parts happen or that the hero will be safe in the end. There’s comfort in the familiarity…and this week, Good Trouble gives us that with the return of the Mamas.

And… sigh… Brandon and his in-laws too but, you know, I try not to think about that.

The Adams Fosters and the Hunters are gathering together once again; this time to say, “bon voyage!” to Eliza and Brandon who are off to Amsterdam for Eliza’s stint as the first chair cellist in the Royal Concertgebouw Orchestra. The party is also a defacto send-off for Stef too: she’s been accepted into an Amnesty International program in Venezuela, focused on helping children, and her departure is imminent. But because Diane Hunter doesn’t do anything half-way, she invites her in-laws to celebrate with a Dutch-themed dinner party, complete with Dutch-themed ensembles (Klederdracht), music, drinks and food. 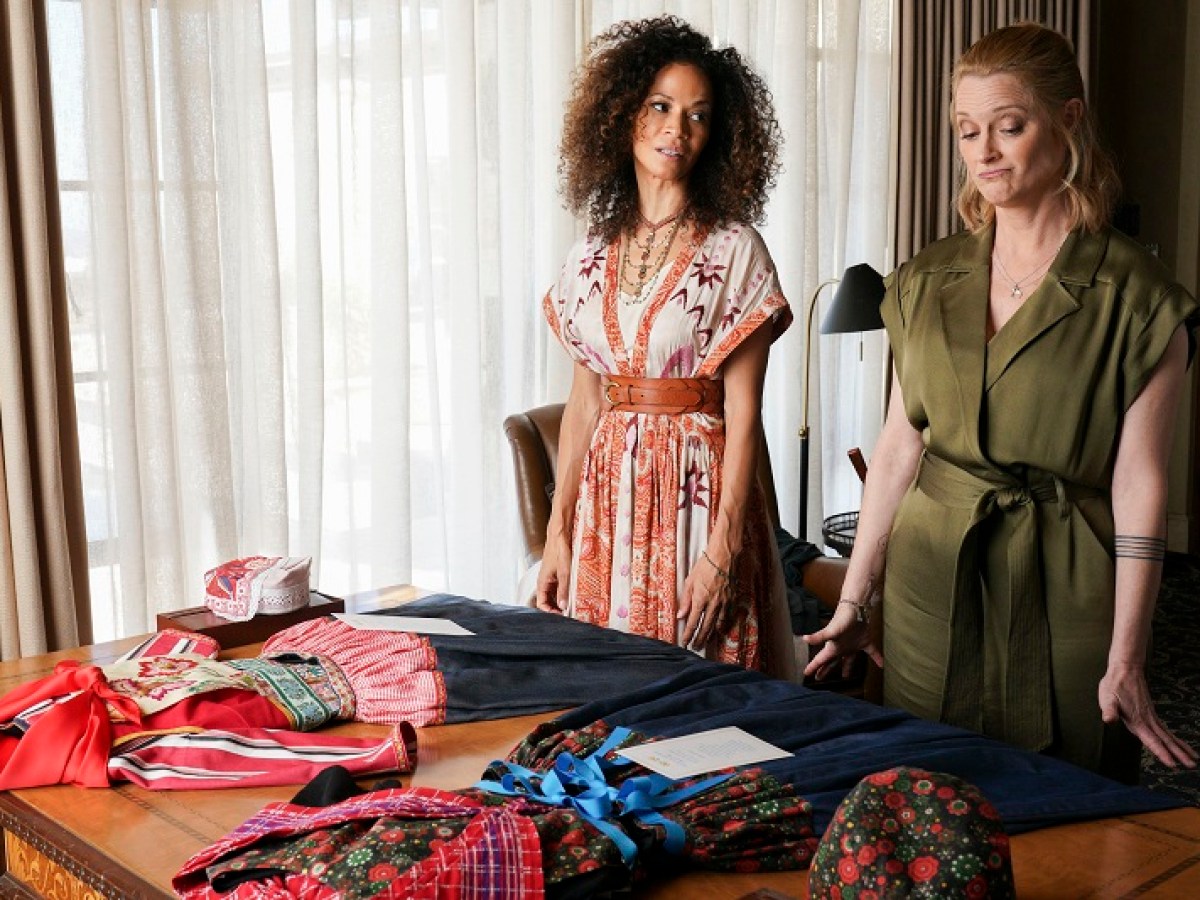 You can imagine how well that went over with Stef. But because it’s for Brandon and Eliza and no one can say no to Lena, Stef dons the outfit and the Staphorsts (special shoes for her, post-back surgery), all while muttering her displeasure under her breath. It’s been over a year since we’ve seen the Mamas on-screen for Christmas at the Coterie and it’s startling how easily Sherri Saum and Teri Polo meld back into their roles. They appear on your screen as though no time as passed, as if they’re still this couple so deeply in love and so deeply committed to the family they’ve created.

The Mamas don’t come alone, though: Corey, the foster kid the couple took in the final season of The Fosters, joins them. He’s all grown up but still adorable with the same bright smile. But Corey’s not the only surprise guest: Connor is also at the party, working as a cater waiter.

Jude: Moms, you remember Connor?
Stef:: Oh, my God.
Lena:: I barely recognized you.
Diane: So how do you all know Connor?
Mariana: Oh, he was Jude’s first boyfriend!

Of course, what Mariana doesn’t know is that Jude introduced Connor to his current boyfriend, Carter, as just an old friend. Oops! This is yet another Easter egg from The Fosters that brought me so much joy. Aside from just cheering for Jude because he was so perfect and innocent ⁠— hence the nickname, Judicorn ⁠— there was something truly groundbreaking about his relationship with Connor. Even today, you rarely see queer love depicted that young and
the couple’s kiss from season two remains one of the youngest gay kiss ever on television. Seeing them reunited on-screen was a real treat… and it took just two seconds for me to start shipping Jonnor again. 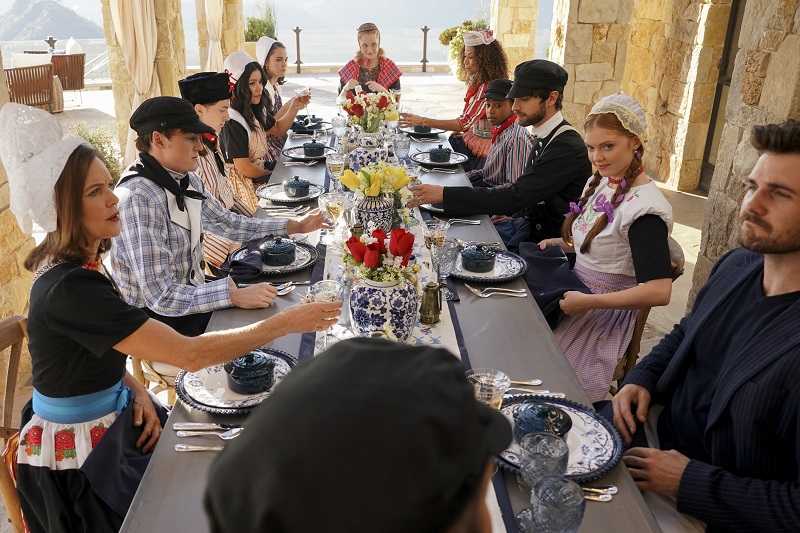 When the Adams Fosters and the Hunters finally sit down to dinner, things are tense. Jamie’s arrived and things are understandably awkward between him and Callie, after their break-up. Everyone’s keeping secrets from everyone else. Jamie hasn’t told his parents he left his law firm (read: got fired). Callie hasn’t told her moms that she got Jamie fired and has left her job at Legal Aid to work as a defense attorney. Mariana hasn’t told her moms about leaving Speckulate ⁠— most notably, why she left ⁠— or that she’s seeing her former boss. But like Jude’s secret about Connor, that he tried to keep from Carter, the truth always finds its way out when the Adams Fosters get together.

As the Dutch band plays in the background, Jamie ⁠— who according to his father looks like a 70s porn star to which I’d ask, “how does Jim know that?” ⁠— lies and tells his parents he quit his job and is looking for new opportunities. He’s far more gracious than I would’ve been and doesn’t publicly acknowledge Callie’s role in getting him fired. Mariana tries to chime in on Jamie’s behalf but only ends up revealing that both she and Callie have quit their jobs recently. Diane’s surprised to hear that Callie’s quit her clerkship but Mariana corrects her: no, Callie’s other job.

And it just spirals on from there: Callie reveals that she left her clerkship early to work at Legal Aid and is now working for a defense attorney. Mariana explains that she left Speckulate because her app was overrun by white supremacists and, annoyed by Jim’s joke, Callie shares that Mariana had been verbally attacked by them. Later Jim asks about Callie’s move to criminal law and she explains about how she joined Kathleen Gale’s team to assure a defense for Jared. She’s far more gracious than I would’ve been and doesn’t publicly acknowledge Jamie’s complicity in Jared being attacked in jail. All of this comes as news to the Mamas.

Stef and Lena relocate to the bathroom to process all the new information. Lena wonders if they should worry that their kids keep quitting things. Before the Mamas can come up with an answer, Mariana interrupts and they question her about leaving Speckulate. She explains and they comfort her but when Stef turns her ire on Mariana’s former boss, Mariana rushes to defend him (leaving out the fact that they’re dating now, of course). Next, Callie interrupts and the Mamas ask her to explain why she and Jamie broke up. She explains that she stole information and passed it to activists which may have gotten Jamie fired but she’s unsure whether or not she should feel guilty about it. Before they can comfort Callie too much or pry Mariana for details about her break-up with Raj, Brandon interrupts and everyone’s curious about his big news.

Instead of telling them, Brandon ushers them all out of the bathroom in which they’ve been hiding and they run right into Diane who unveils her next surprise: Fleur, who will teach the group a traditional folk dance. And, that is every bit as a joyous and hilarious as you’d think it is…even if it ends with an utterly awkward dance between Jamie and Callie. During dessert, Brandon and Eliza finally spill the big news: Eliza’s orchestra exchange has been cancelled but they’re still going to Amsterdam anyway because Brandon’s found a job with a composer there. This is the kind of underwhelming news I’ve come to expect from Brandon. 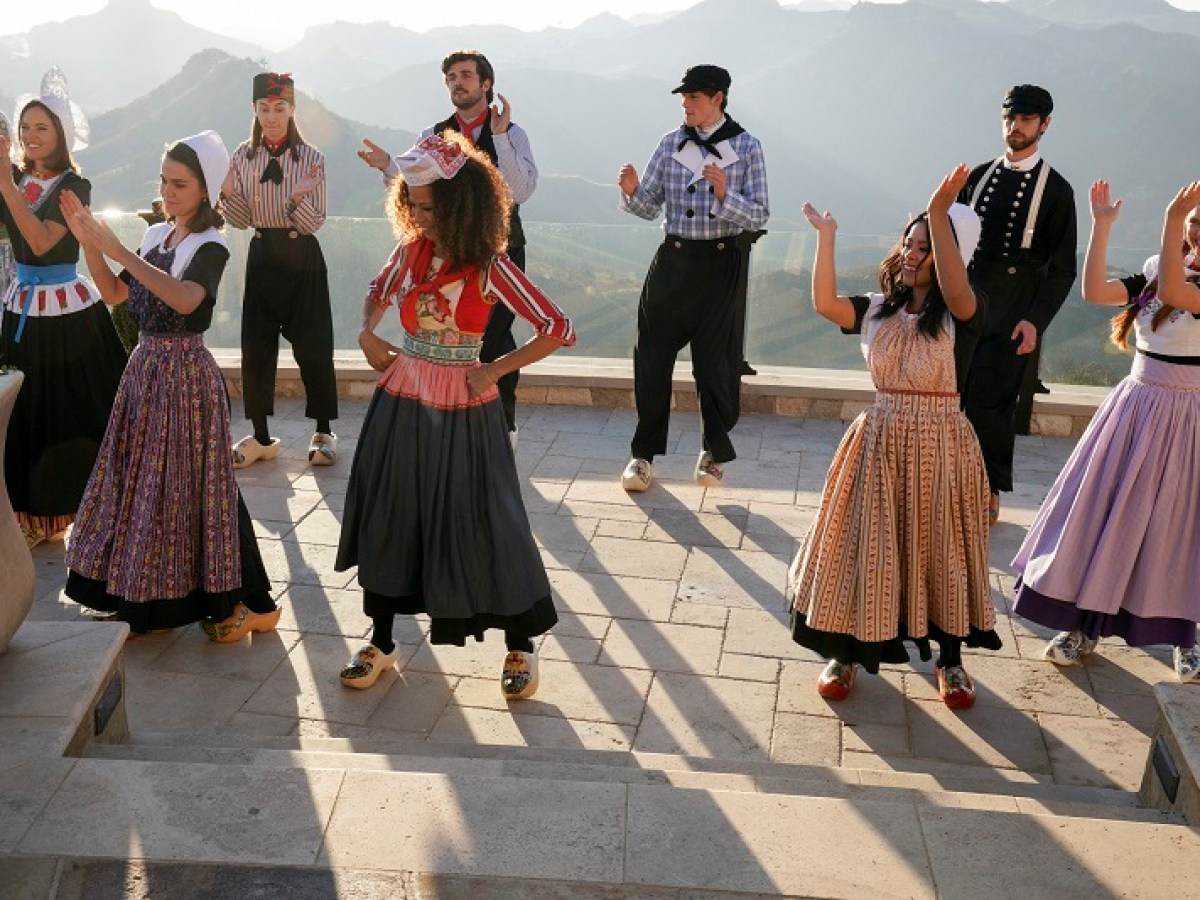 After the Mamas get out of their Dutch costumes, they take Jude’s advice and check-in with Corey. His half-sister’s grandmother can no longer care for her and she’s going into the foster system. It’s clearly worrying Corey but he opted not to tell Stef and Lena because he didn’t want them to feel pressured to intercede. Corey’s like Judicorn 2.0. But, of course, Stef wants to intercede but Lena’s reluctant.

Lena: We’ve already adopted and fostered four kids, we’ve earned the right to be done with parenting. She’s four years old and that’s 14 more years until she’s 18.
Stef: (with a slight smile breaking on her face): Frankie wouldn’t be that much older than Ka’maya is now. Hmm?
Lena:: (sighs audibly) I can’t quit the State Assembly which means that you would have to be home, you wouldn’t get your next chapter.
Stef: Wouldn’t I? This is a new chapter too, don’t you think? The whole point of going to Venezuela is because there are children that need help. If there’s a child here that needs help, isn’t that also the point?

Me either, Mariana. Me either. 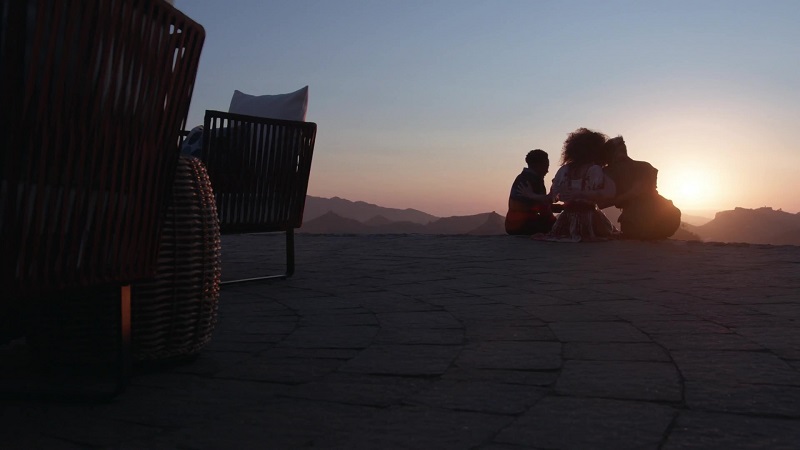