Click for other stories garnered from the Ultimate Lesbian Sex Survey

In February 2015, Autostraddle launched The Ultimate Lesbian Sex Survey, open to all “lady-types who sleep with lady-types.” We garnered over 8,566 complete responses (89% of which were from people between the ages of 18 and 36) and now we’re sharing the results with you, bit by bit. Previously:

How Much Smut Do Queer Women Consume?

Dazed Digital, on the other hand, did a much larger and more revelatory survey of 10,500 men and women in 114 countries. They came up with higher numbers:

… while a quarter of respondents never watch pornography, 59% watch it one to five times a week, and 16% six or more times. Both women and men like it – around three out of five watch it at least once a week, regardless of gender. Divisions occur at the extremes of consumption: 90% of people who never watch porn are women, while 90% of people who watch grot more than 11 times a week are men. Put another way, while most women indulge at least once a week, only 4% do so six or more times a week, compared with 60% of men who watch it nearly every day or more.

What kind of smut do queer women consume?

The data below comes from the 5,277 respondents who helpfully responded “yes” to the question “do you consume porn/erotica/smut in any form?”

So let’s talk about these numbers!

This brings me to the second reason these numbers are unsurprising: y’all love some fan-fic. Fanfic initially took off as a way for fans (mostly women) to explore male/male Star Trek pairings the show itself would never enable, and queer women have flocked in droves do the genre. In addition to reading male/male pairings, queer women use fanfic to tell stories about the female/female pairings who connect sexually onscreen at a rate of rarely to never.

In the 200 comments left in the open-ended box for this question, about half were making sure I knew that by “erotica” they meant “fan fiction.” Here’s a sampling of some of those answers:

Some quotes from our own survey-takers:

I cross-checked a variety of factors, such as age, employment status, affinity for kink, sexual experience and gender presentation, to see if any of those had an impact on this field of preference and nothing stood out. Therefore, my theories are as follows:

How Much Smut/Erotica/Porn Do You Consume?

What factors influence how often you consume smut/porn/erotica? Let’s look at various relationship and sexual situations. 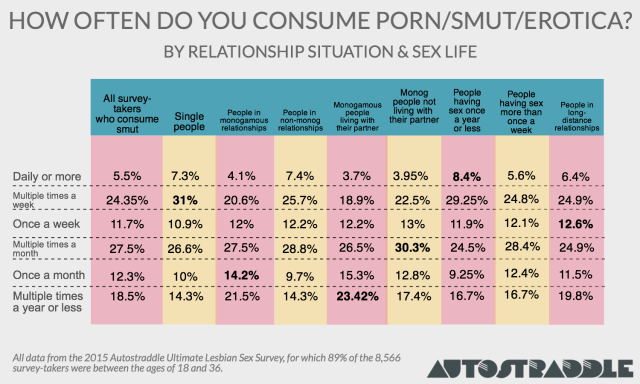 Go forth and enjoy whatever kind of smut you wanna!