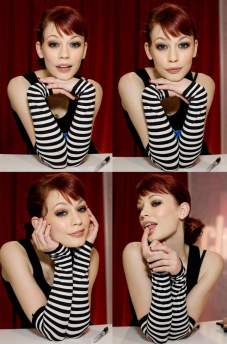 SPECIAL NOTE: If you click on the “Juicy Pink Box” link, you’ll go to a credit card situation. You need to type “www.juicypinkbox.com” into your browser and you can go to the preview site that way.

You can see a preview of like 12 people f*cking in the back of a taxi cab, which p.s., I highly recommend for ladies on a budget ’cause then you basically have already given a big tip. BTW Justine Joli who I just now disovered calls herself the world’s hottest geek, so perhaps Taylor can check her out for our next installment of Technostraddle’s Spicy Hot Geeks. I mean, hello robot?.

LOLZ: Back in 2007, an author named JOHN for a website named Buzzle.com (“intelligent life on the web”) to to tell you “all about lesbian sex and terminology.” Why, well, because “alternate sex practice like same sex dating is always seen as bizarre … hence, here is an article that … tries to portray lesbian sex dating as not so bizarre.” Then he proceeds to make it sound REALLY F*CKING BIZARRE to those of us familiar with these actual practices in practice. Some highlights:

Lesbians find new and inventive ideas for sexual stimulation. It is any body’s guess, what they do in the close confine of bedroom.

Lesbian Kissing and smooching: like any other kissing. Kissing is expression of emotions between two women lovers.

Tribadism: Basically, tribadism is grinding vulva against some Opart of lesbian partner’s body. One can hump a partner’s thigh, rub vulva to pubic bone, or vulva to tailbone.

I wish I could combine all those lovely descriptions into one lesbian who comes out closets, is very violent, has the killer looks, and loves her shoes. Who doesn’t love shoes though? They protect your feet from the ground!

PROBS TRUE: Um, hostelbookers did a survey and determined that Australians are the best lovers. Hostelbookers! Does that seem funny to anyone else?

GALLERY: 105 Steamy Takes on Sexuality: “In 2009, we’ve seen a number of different takes on sensuality. Sure, a sprawling nude model will always win in the sensuality department, but this year we’ve also seen sensuous shoots that depict amputee models, women covered with tattoos and channel the retro circus and vaudeville era.” 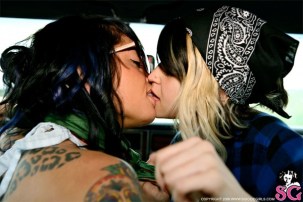 BABELAND: The Best Holiday Gift Kits at Babeland because who doesn’t want an orgasm in a box? Or you can go a little low budget with the The Snakebite Kit: Unsung Hero of Sensation Play.

BAD SEX: Bad Sex in Fiction Award: “A Negative View of Women Leads to Bad Sex Writing, as Well as Bad Sex Generally.” I believe this is true.

NAKED GIRLS: Bathroom Portraits: “Our contributing photographer Nate “Igor” Smith has a longtime hobby: shooting nudes in club bathrooms for his site Driven By Boredom. He went through his back files to bring you this fine retrospective.”