In February 2015, Autostraddle launched The Ultimate Lesbian Sex Survey, open to all “lady-types who sleep with lady-types.” We garnered over 8,566 complete responses (89% of which were from people between the ages of 18 and 36) and now we’re sharing the results with you, bit by bit. Previously: How Often Do Queer Women Have Sex?, 100 Gayest Places You’ve Had Sex, The Masturbation Habits of Queer Women, 50 Really Fascinating Things You Wanted Us To Know About How You Have Sex, 26 Bits of Solid Sex Advice, 41 Feelings You Have About Scissoring, Here Are Your Very Queer Underwear-Wearing Habits, When It Comes To Orgasms, Lesbians Are Nailing It, The 100 Most Ambitious Places You’ve Had Sex and When Did You Do It For The First Time and How Many People Have You Done It With, Huh?.

The internet has served to make people more aware of and empowered by non-monogamy than ever before. Dr. Elisabeth Sheff, author of The Polyamorists Next Door, writes on her website that research has shown that “sexual styles such as polyamory have increased with the advent of Internet technology, which facilitates communication between geographically disparate people seeking support for alternative relationships.” She concludes, “in recent years, the Internet has proved an especially important site for community building among marginalized populations… The impact of the worldwide web on the polyamorous community would be difficult to overstate.”

This becomes doubly true for non-monogamous queers, and perhaps three times truer for transgender non-monogamous queers — so many layers of “alternative relationships” suddenly open for immediate discussion! And although the media is completely obsessed with gay male non-monogamy, there’s not a lot out there about non-monogamy rates among queer women. So, let’s talk about it now!

We also asked all survey-takers for their preferred relationship style, which broke down into more specific categories:

The other category, Mostly Monogamy (chosen by 22% of survey-takers) means many different things to many different people. For some people, this just means not cutting off the possibility of involving other partners (e.g., threesomes) or even kissing other people with my girlfriend present and involved. For some people, it means other things, and maybe you’ll tell us in the comments! Regardless, it was a popular choice for both monogamous and non-monogamous folks on our survey, but we didn’t want to draw any conclusions from that without knowing your own definitions.

Okay, so, first let’s look at some of the demographic differences between people in monogamous and non-monogamous relationships. 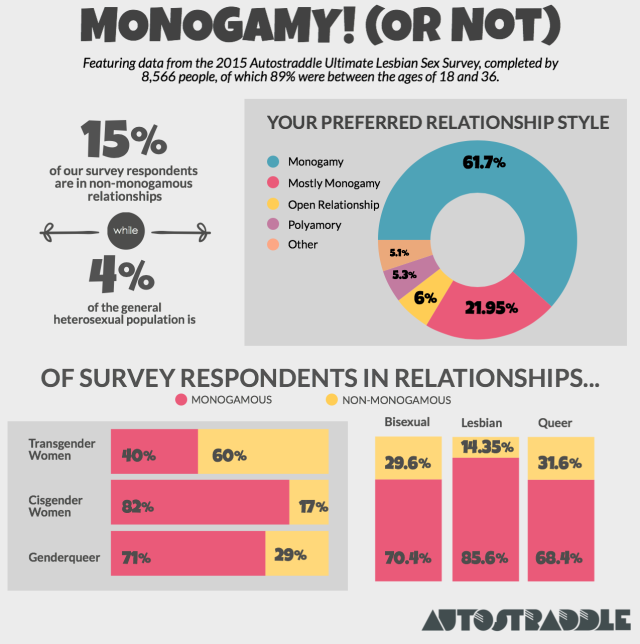 15% of our respondents — 1,273 people total — were in non-monogamous relationships. The infographic below contains a wealth of information we gathered from your surveys: 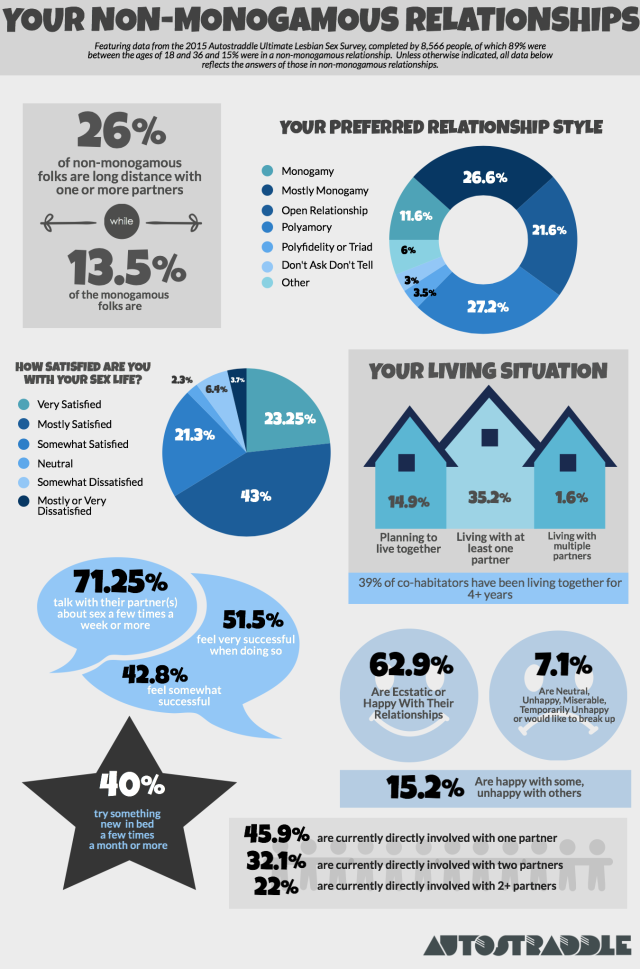 What’s Going On With The Monogamous People In Non-monogamous Relationships?

I was interested in that 11.6% of those in non-monogamous relationships who picked “monogamy” as their preferred relationship style. We get a lot of advice questions from women whose long-term girlfriends want to open up the relationship but they’re resistant to it (e.g., You Need Help: Your Girlfriend Wants to Date Other People and It’s Breaking Your Heart), which is one potential explanation for this discrepancy. It’s also possible that these are women who’ve never done non-monogamy before, but are trying it out with a new relationship. So, I did some digging.

Looking at just that group — current non-monogamous relationshippers who prefer monogamy, who I’ll refer to as the Non-Monog Monogs, or NMMs, going forward — the happiness pie does change quite a bit. 10.9% are “ecstatic” and 25.8% are “happy” in their relationship, compared to 26.3% and 36.6%, respectively, of the whole non-monogamous group. The most popular selection for the NMMs was “kinda happy,” which topped out at 27.9%, compared to 14.7% of the entire NM group who defined themselves that way. “Happy with some, unhappy with others” is pretty similar (15.2% vs 16.3%), but only 3.4% of the whole NM group felt “neutral,” opposed to 10.9% of the NMMs. Only six people in the entire NM group picked “would like to break up” — and five of them were NMMs.

Are they just trying something new with a new partner? Quite possibly, yes! Most of these relationships are fairly new or casual. Nearly 52% reported being with their primary partner for less than six months, with 74.8% reporting relationship lengths of under a year, and the overwhelming majority reported length of involvement with any additional partners at under a year, mostly under six months. Only 11% of the NMMs said they lived with a partner, compared to 35% of the entire NM group. 66% of the NMMs described their relationship as “dating casually.”

So, what’s the answer? The open-ended answers from NMMs to “if you could change anything about your sex life, what would it be?” were very revealing, and enabled me to split this group into four sub-groups based on the four types of answers I saw pop up most frequently and aforementioned stats.

2. I want my partner to live where I live: People trying non-monogamy because their partner lives too far away and they see each other too infrequently to meet their sexual needs.

3. I want more confidence in bed: These answers were brief — usually just “more confidence” — and frequent. But I have no theories about this group, only the awareness that they exist.

4. I’d rather be in a monogamous relationship and/or I’d like to meet someone I’d want to be monogamous with: People who are reluctantly in a non-monogamous situation at a partner’s request or are willingly in one ’cause they’re not interested in getting serious with a present partner. Examples:

And Now For The Monogamous… 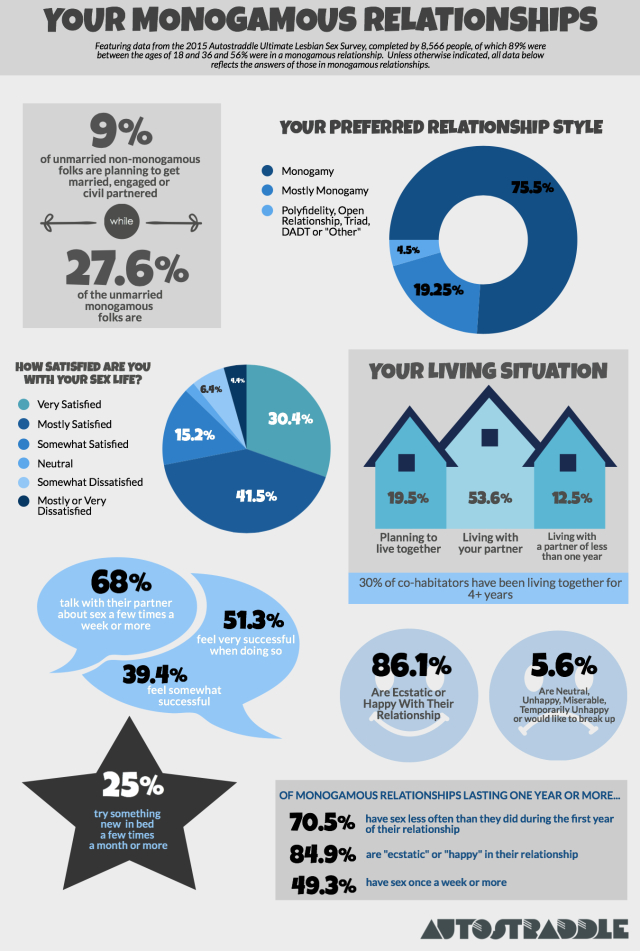 What’s Going On With The Non-Monogamous People In Monogamous Relationships?

This particular sub-group is pretty interesting because it’s revealing in terms of how a certain (potential) conflict that arises between couples looks on one side. We rarely have a chance to look at hard data about relationship issues, you know?

So, Non-monogamous people in Monogamous Relationships are a smaller percentage of the whole than we’ve got in the reverse instance, but it’s a larger number of people, period, which means there’s still statistically significant morsels to uncover. I’ll refer to this group as the Monog Non-nonogs, or MNMs, going forward, but here’s how preferences break down within that group:

“Other” ran the gamut, but included a lot of: “I don’t know,” “I have no preference,” “I’m open to whatever my partner is into” and “I’m interested in exploring open or poly situations.” There were also combinations of styles, like “monogamy with threesomes every once in a while.” Several people said they were doing monogamy for their partners’ sake — which seems to be a more amicable relationship than the reverse, perhaps due to monogamy being the cultural norm, or the idea of opening it up coming later in a long-term relationship.

Only 19.2% of these couples were less than 6 months old, and 14% less than a year, which is pretty consistent with the whole group. 62.9% lived together and 30.4% were married, engaged or civil partnered. Only 7.6% qualified their relationship as “dating casually.” This is a huge contrast to what we found with NMMs.

The most dissatisfied group of humans were those in monogamous relationships who prefer “Don’t Ask Don’t Tell.” That seems like it probably has an obvious explanation.

What would they change about their sex lives if they could? MORE. More sex or more people to have sex with. Some answers included:

Here’s what seems to be happening: for perhaps a slim majority, but still a majority, of these women, non-monogamy isn’t necessarily a relationship style they prefer but are presently sacrificing for their partner’s sake, but rather something they’re considering because their present relationship is lacking sexually: in frequency, in kinkiness, in acts performed, in the gender identities of the humans involved or in any other way.

Regardless, judging by the length and seriousness of the relationships, people definitely feel more comfortable sticking with monogamy despite non-monogamous leanings than they do with the reverse situation. This could change as cultural norms do, or perhaps has always been so and always will be.

Let’s Talk About Not Talking About It

Folks who indicated a preference for Don’t Ask Don’t Tell relationships stood out statistically from the other groups in many ways, which is very interesting! Here are some of those ways:

On page two, we’ll look at some popular beliefs about non-monogamy and how these ideas hold up in the face of daunting data.