Read this article from the San Francisco Chronicle: Many Gay Couples Negotiate Open Relationships (catchy title). Well for Christ’s sake, something like FIFTY PERCENT of gay men (in the Bay Area, at least) have open relationships. 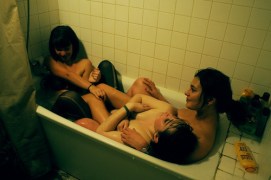 See, “A new study released this week by the Center for Research on Gender & Sexuality at San Francisco State University put statistics around what gay men already know: Many Bay Area boyfriends negotiate open relationships that allow for sex with outsiders.”

We’re just curious, what is that like for queer women?

What are your thoughts on open relationships? Have you ever been in one or are you currently?

Do you have “rules” or what would your “rules” be?

According to stereotypes and ‘society,’ women have more feelings than men, so are men just better equipped to effectively navigate an open relationship without getting hurt? Are queer women capable of compartmentalizing their emotions, etc.? Is it all a social construction we could break down ourselves?

Who wants to make a cuddle sandwich?