Two hallmarks of Good Trouble‘s first season have been its unique brand of non-linear storytelling — that is, the use of certain moments of action or dialogue to provoke flashbacks, mirroring the way our memories often work — and its continuation of a Fosters-era habit of telling a lot of story in a very short amount of time. Sometimes it doesn’t work: there have been a few times in the show’s inaugural season where the non-linear storytelling has distracted rather than illuminated character’s motives. And, through 12 episodes, there have been a couple times where Good Trouble endeavors to tell more story than it has time to tell well, to the detriment of some of the characters.

But “Broken Arted” succeeds where other episodes of Good Trouble have faltered. It turns two of the show’s occasional weaknesses — the non-linear, overstuffed storytelling — into its strength and produces the best episode to date. The last four minutes of “Broken Arted” wouldn’t cut nearly so deep if the story had been told differently.

But before we get into those last four minutes, let’s talk about the rest of the episode, shall we? 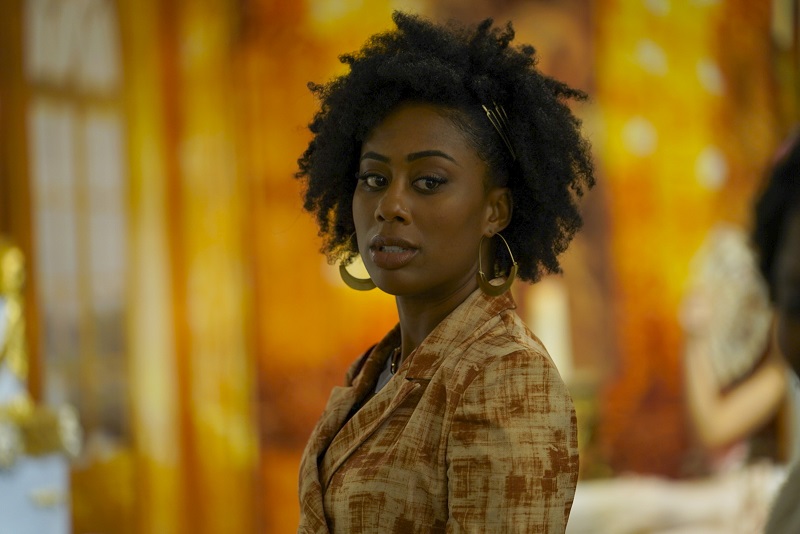 Aww, Natalie wants to believe that this overstuffed episode was a stylistic choice. That’s so cute.

The start of the Jamal Thompson trial is just a few days away so Malika’s organizing her friends and fellow Coterie members to help with the preparation for the opening day protest. Missing from the sign making festivities? Isaac, who got his walking papers last week, and Malika’s brother, Dom, who refuses to communicate with her after she walked away from their mother. She tries to act unbothered but when her graduation announcement is returned and her texts go unanswered, the stress Dom’s absence is putting on Malika is clear. Still, she persists: showing up at Gael’s gallery opening with handbills advertising the upcoming protest.

While Malika’s working on agitating from the outside, Callie’s still trying to contribute to the fight from inside. Last week, Judge Wilson removed her as the clerk for the case citing a concern about her lack of objectivity which is valid — have you met Callie Adams Foster? The girl is the posterchild for the lack of objectivity — but it’s Wilson’s objectivity that’s come into question for Callie. She uses Jamie’s connections to get an investigator to look into how and why felony charges (including assault on a police officer) against Judge Wilson’s son, Tate, were unceremoniously dismissed. The investigator can’t find anything to support wrongdoing in Tate’s case but he did manage to unearth some information about why the LAPD’s leader stepped down in the middle of a high profile police brutality case.

“Chief Kelly, the former chief of police when Jamal was shot, he didn’t decide to retire, he was forced to. There was an [Internal Affairs] investigation going on about some comments he allegedly made to officers, one of which was that it’s easier and cheaper for the department to let victims of police shootings die,” the investigator reports. The revelation is something that could dramatically bolster the case against the officers (and the LAPD, writ large) but it also presents a new quandary for Callie: how does she get this information out and keep her job as Wilson’s clerk?

Working with Malika on protest preparations sparks an app idea for Mariana who’s finally getting that pitch meeting with her boss. She dare not share it with Evan, though — “organizing the organizers” isn’t really in line with the kind of content that Speckulate produces — and scrambles to come up with a new idea that her boss has never heard before. But before she can, Mariana runs into Evan at the gallery opening and he asks her to pitch her idea on the spot. Much to Mariana’s surprise, Evan loves the idea and wants to move on it right away. But before Mariana can celebrate her successful pitch too much, Raj comes along and pops her bubble. 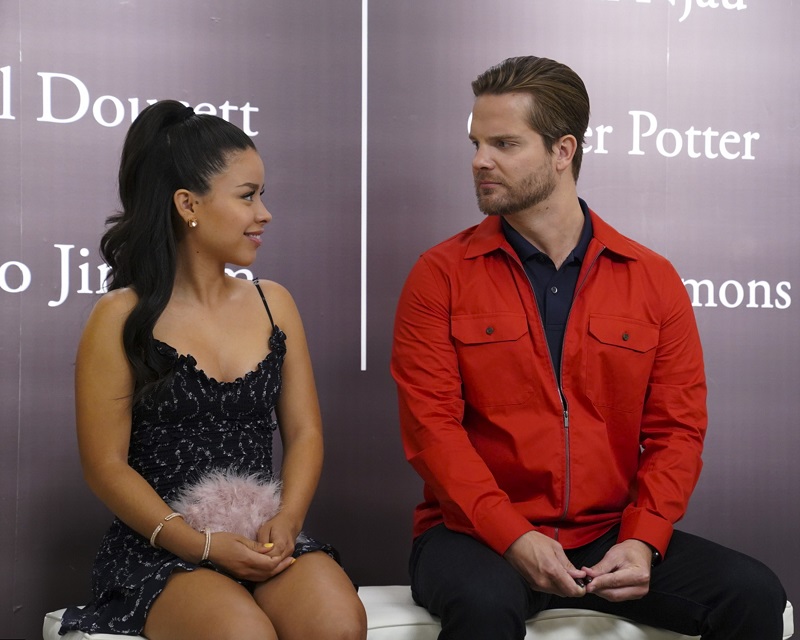 How am I supposed to decide between Emily Fitch and Carmen from The L Word in March Madness?

“I’m sorry, it’s very exciting… I just… I worry about Evan’s intentions,” Raj stammers. “Evan’s different around you, he looks right through everyone else.”

Mariana is livid. She calls Raj out for suggesting that the only reason that Evan is interested in her app is that he’s interested in her. Raj tries to backtrack but it’s too late. She calls him out for projecting — the only person that’s proven to have intentions — and storms off. And while you want to cheer Mariana’s righteous indignation, two of Speckulate’s brass, Angela and Josh, are also weary of Evan’s interactions with the new engineer. Apparently, Evan has been down this road before, with someone with Amanda, and Josh doesn’t want history to repeat itself. He urges Angela to find a way to shut down Mariana’s pitch meeting — sorry, bro, too late! — or find an excuse to fire her.

Josh’s instructions make me weary when, the next day at work, Angela slides Mariana a flash drive with the salaries of Speckulate’s male employees on it. The information is exactly what the Byte Club needs for their pay equity spreadsheet (which Angela clearly knows all about) but it’s definitely not information that the head of Speckulate’s HR department should be distributing. Is Angela joining the resistance or is she setting Mariana up to take the fall for accessing information illegally? It’s anyone’s guess.

Meanwhile, Davia and Alice both show up to Gael’s gallery opening with dates. Jeff’s back in Los Angeles, repeating his promise that he’d leave his wife though he has little to back up his words thus far. Thankfully, Davia’s committed to treating herself with respect and refuses to leave the life she’s built in DTLA to be his mistress back in Wisconsin. Alice is there with Joey, of course, and things are going great until Sumi and Meera show up and we get a second helping of last week’s double date awkwardness. 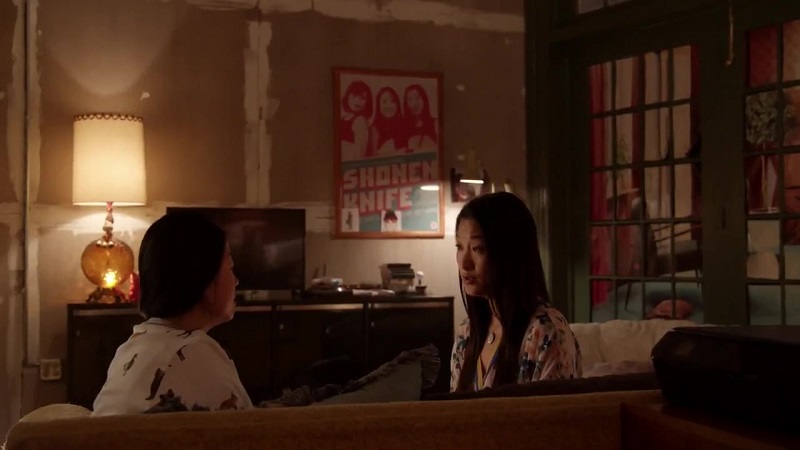 Meera told me who she voted for in March Madness and… I don’t think that our relationship can recover.

What was hinted at during that dinner party is made explicit this week as Sumi expresses doubts about her forthcoming wedding. Alice holds it together far better than I would — far better than I think she should, TBH — as Sumi realizes she’s had her soulmate in her life this entire time. Sumi tells Alice that she doesn’t want to marry Meera and she’s still in love with her. Alice isn’t sure what to say (girl, me either!) but by episode’s end, the only person that seems to believe that there will actually be a wedding next week is Meera.

There are no small stories this week on Good Trouble: the Jamal Thompson case and protest, Malika’s issues with her mom and brother, Callie’s investigations into Judge Wilson and the the LAPD, Mariana’s app pitch (and possible harassment), Gael’s gallery opening and explosive break-up with Bryan, Jazmin’s settlement in her discrimination case, Jeff’s divorce, Davia’s possible move back to Wisconsin, Davia’s homeless student and her ignorance to the things that impact her classroom, Alice’s new relationship and the re-emergence of her old one, at the expense of Sumi’s engagement to Meera.

It’s a lot. And while I’d usually complain about that, it works here because of what happens in those last four minutes.

We got to know Dennis best when the mamas came to visit. Stef was in town, just visiting her daughters, so she had time to stop and listen to him… to find out who he was and what really made him tick. We learned then he’d lost a son two years prior and, after that, nothing else seemed important anymore. He gave up his corporate job, his marriage failed… and, eventually, he found himself at the Coterie, happy for the anonymity that comes with living with self-involved millennials.

“I feel like I’m always alone,” he told Stef, sobbing openly. It was a sign of how depressed he was but his image as the disaffected rocker made it easy to hide that fact from his friends.

He keeps trying to build a life for himself… to love others and to love himself… but when he does, he gets pushback. When he asks his wife for half of the sale of their home, she resists, despite having told him that he deserves it just a few weeks prior, and threatens him with a lawyer. Seeing that Dennis can’t be placated, Nathan pulls back on the offer to fund Jesus’ tiny house project. When he won’t relent, his wife chastises him for his past actions, calling him “a shitty husband and a shitty father” and telling him that “Jacob had to get cancer for [him] to pay attention” to his son. It’s the lowest of blows and pushes Dennis to the darkest of places.

The overstuffed episode feels appropriate here only because it makes the audience feel Dennis’ isolation. Oftentimes, folks who contemplate suicide report feeling like there’s no one they can talk to and Good Trouble really gives you a window into how Dennis must have been feeling. Surely, his friends (especially Alice) would’ve stopped and listened if he’d asked… but Dennis felt he couldn’t… in part because of how much everyone else has going on. There wasn’t room for him and his pain. As so that night at Gael’s opening, Dennis says good-bye to everyone. To Davia. To Alice. To Gael. To Malika. To Mariana (with a promise of support for Jesus). 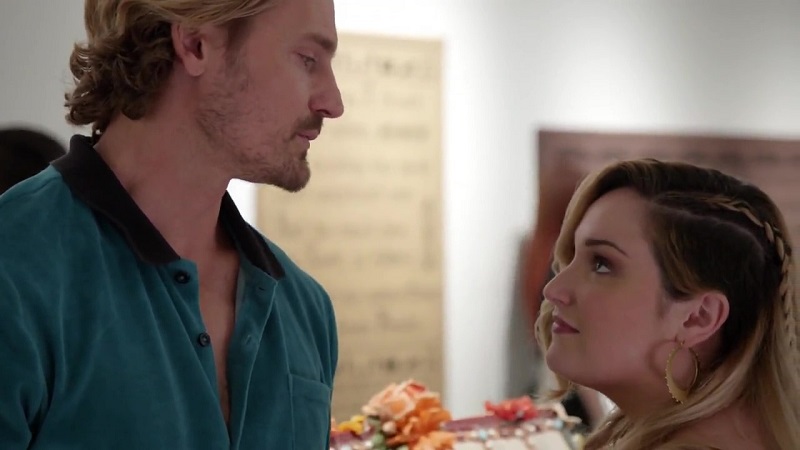 “I am sorry. I never quit being sorry. It’s all I do is fail people and the truth is, I wish I was the one that died that day, not Jacob,” Dennis cries on his wife’s voicemail. He’s a broken man… and if the stellar performance from Josh Pence didn’t make that abundantly clear, the use of David Ramirez’s “I’m Not Going Anywhere” certainly does. We don’t see it, we don’t know for sure but it certainly seems like Dennis took his own life.

Davia hears the message the next day, flashes back to Dennis’ interactions at the gallery, and puts it all together. Tears spilling from her eyes, she calls Dennis immediately and begs him to call her back.

If you find yourself relating to Dennis’ story on Good Trouble this week, please know that you are not alone and there are plenty of resources out there to help. You can reach out to the National Suicide Prevention Lifeline at 1-800-273-8255 or text HOME to the Crisis Text Line at 741741. You can also find other resources at https://itgetsbetter.org/get-help/.