When Stef and Lena come to visit their daughters’ new apartment in downtown Los Angeles, Callie is overwhelmed by work. She’s the assigned clerk for nearly 50 cases and has to balance those obligations with studying for the bar. She’s in constant competition with her fellow clerks, Ben and Rebecca, and never really knows if they’re friend or foe. She’s risking her clerkship and career by not disclosing a potential conflict of interest in the Jamal Thompson case and now that Ben knows Malika lives in her building, it’s only a matter of time before Callie’s secret is exposed. Whatever free time she has left, Callie spends “having casual sex with a guy in [her] building.”

Meanwhile, Mariana is working at a local tech start-up, awash in the hallmarks of dude-bro culture: casual sexism and racism. She’s tried everything that she can think of to fit in — doing the menial tasks, excelling at the assigned tasks, inviting her teammates to socialize outside of work — but none of it works so Mariana’s stopped trying. Instead, Mariana shops and goes out, every night. Sometime after last call, she stumbles into the loft, strips off her clubbing clothes, puts on whatever outfit she wants to wear to work the next day — a guarantee of ten extra minutes of sleep — and collapses on her bed.

But when the mamas come to visit their daughters’ new apartment in downtown LA, they can’t know any of that. It’s one of those unspoken rules of early adulthood: the first time your parents visit, nothing is wrong. You love your job and you’re the star of the office. You love where you live — and it’s so incredibly safe — and, yes, of course, it’s always this clean. Your roommates? Incredible people who you’ve gotten to know so well in such a short time. No, you’re not seeing anyone yet; things have just been so busy. Everything about that first visit has to paint a perfect picture. You have to assuage whatever concerns your parents could possibly have. They have to leave believing that you are the person they raised you to be and, as a result, you are killing this whole adulting thing. Them’s the rules. 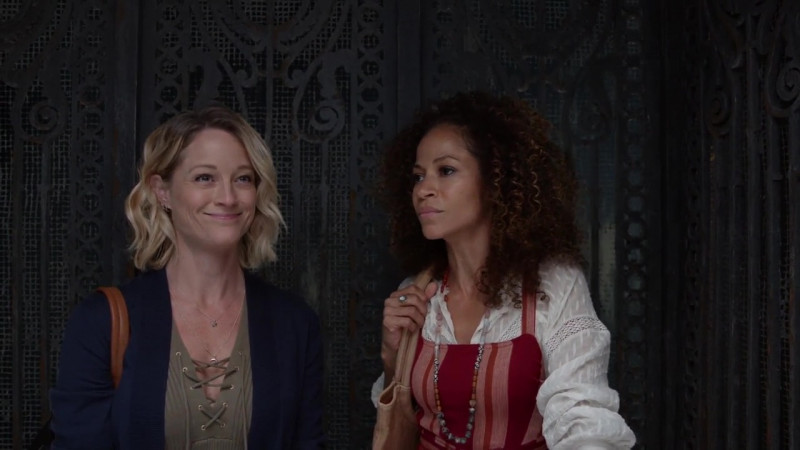 Callie and Mariana aren’t the only ones having to pretend everything is okay.

And, it starts out well enough: Callie’s frantically cleaning the Coterie. She talks to Gael and Malika about keeping their respective secrets — Gael, about their casual nighttime romps, and Malika about Callie’s work on the Thompson case — while the Mamas are visiting. Mariana’s filled their loft with all new furniture so their space looks more like adults live here. But before the Mamas can even ascend in the elevator, things start to go awry: a fire marshal shows up to investigate an anonymous tip that the Coterie is a fire trap. The Mamas show up at that exact moment and, all of a sudden, all the rules go out the window.

The awkward start throws Callie and Mariana off their game. One question from Stef about building safety and Callie unwittingly reveals that Mariana’s been getting home at 3AM some nights and, already, you know that the rest of this visit isn’t going to go according to plan. The girls steer the Mamas into grand foyer and barely allow Lena time to revel in the architecture before continuing the tour in the building’s shared bathroom. And, of course, at the exact moment that they walk in, a girl stumbles out of the shower in a towel. Callie and Mariana pretend to know her, in attempt to reassure their mothers, but the girl — who is, apparently, too young to know the rules — corrects them. Then Dennis, the Coterie’s resident old guy, steps out of the same shower stall. He introduces himself to the Mama and Lena acknowledges him but Stef demurs, her body stiff as she instinctively switches from mom mode to cop mode. This is going bad, y’all… so, so bad.

Callie and Mariana direct their moms to their loft and, as they get settled in, Mariana can’t help but spill some of the Coterie drama: Alice’s meltdown over the toilet paper, Dennis’ intensity and rock star dreams, the chamber pot. The moms stifle their dissatisfaction by munching on the cookies that Dennis’ latest hook-up made and practicing their meditation. It helps but not for the reasons Lena might think… 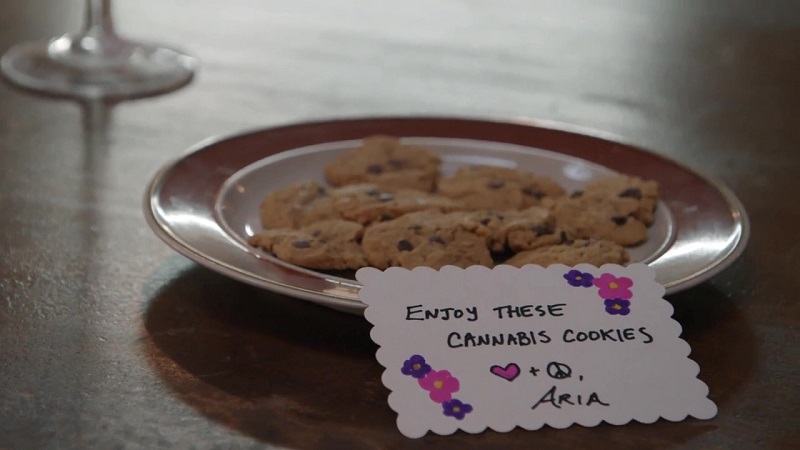 She might have mentioned this when she offered folks the cookies. Though, to be fair, I should’ve anticipated bad decisions from an Aria on Freeform.

The cannabis cookies turn the moms into unfiltered versions of themselves. Lena is more ethereal and wistful, stopping to appreciate the beauty of everything, even at the most inopportune moments. She fixates on the beauty of the Coterie’s rooftop views and then on textures of Gael’s paintings — there’s a buffalo in there, she thinks — and, until Callie finds her, on the picture of Elizabeth Eckford (of the Little Rock Nine) that hangs on Malika’s loft wall. The picture stirs memories of a recent campaign event where Lena was confronted by an online conservative troll come to life. He drops all the requisite insults — libtards, handouts, lazy, “you people,” criticizing Black Lives Matter — and it all feels like too much of a caricature (especially after an election that turned most of San Diego blue) but then the troll spits in Lena’s face and all bets are off. I’m ready to go fight all of San Diego to defend Lena’s honor.

Stef reacts differently: stoned Stef’s inner monologue — the things that she usually doesn’t bother saying or only says to her wife — becomes her outer monologue. Stef says exactly what she’s thinking, exactly when she’s thinking it and can’t be concerned with how it makes anyone else feel or how inappropriate it might be. The comments that she tosses at Gael are funny and harmless but, stoned Stef pulls no punches with Dennis: using an improv game as an opportunity to rail on him for sleeping with a much younger woman. It’s only when Davia admits to eating some of the cannabis cookies that Mariana and Callie figure out what’s happened to their moms. 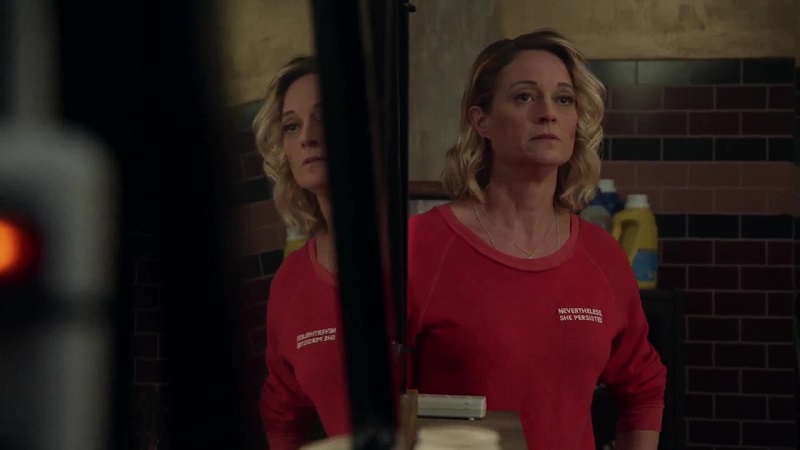 Later, Stef runs into Dennis in the communal bathroom and apologizes for her behavior. Still, clearly, a little stoned, she overshares, “We care about what our daughters are doing, where they are, who they’re living with, which seems to be, apparently, a lot of people. [We’re] just concerned that they’re safe. I do not know what my girls have told you, but I used to be a detective in human trafficking, so please forgive the stereotype but whenever I see an older man with a younger girl, it kind of sets me off, to be quite honest. Or, you know, it could just be me having a hard time letting go, accepting that maybe they don’t need us anymore… someday, if you have kids, maybe you’ll understand.”

Through five episodes of Good Trouble, Dennis has been the least defined character on the show and, here, you find out that that’s by design. He wants to be ignored, he doesn’t want anyone asking questions about the life he led before he showed up at the Coterie. He does that because he knows, the pain of his past life lies just beneath the surface, and if anyone gets too close, it’ll all be exposed. Stef does and Dennis’ truth spills out. He used to have it all — the house, the corporate job, the wife, the kid — but his son died at six and everything just fell apart after that. For Dennis, bedding women is just a way making sure he’s not alone, especially on what would’ve been his son’s 8th birthday. As he wipes the tears from his eyes, he asks Stef not to tell Callie and Mariana and she agrees; his reputation as the creepy old man will stay intact.

The next day, the moms join everyone for a family dinner and, as you might expect, they ingratiate themselves to everyone. Lena builds a warm rapport with Malika over a shared appreciation for social anthropology. They ask Gael about his work at Speckulate and his art and Davia uses the moment to throw a not-so-subtle dig at Gael for stringing Bryan along. Everyone settles down for dinner and Lena connects with Davia over their shared experience in the classroom. Stef insists that Dennis and Cannabis Cookie baker stay, after Davia tries to push them both out of the door. Gael confronts Davia about her behavior and Mariana, seemingly forgetting that her mothers are sitting across the table, stands up for her sister, saying, “Everyone knows that you’re hooking up with Gael, it’s not a big deal.”

Alice tries to defuse all the tension in the room by getting a family picture of the girls and their mothers and, for a second, I think it might just work. But then, in strolls Jamal Thompson’s mother to pick up the t-shirts Malika made for the protests. Callie spots her before she’s seen and promptly runs out of the Coterie. 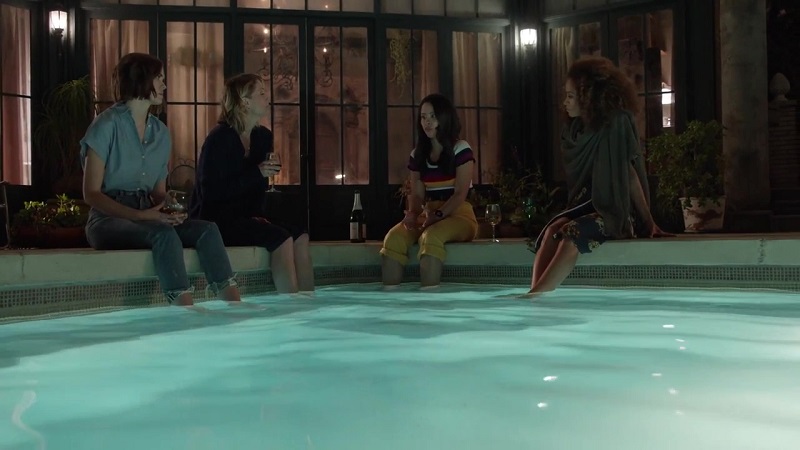 By the time Callie makes it back to the loft, Mariana’s told the moms that Callie’s the clerk in the Thompson case. Callie repays her by revealing that Mariana’s $20,000 in debt. After exchanging barbs, the sisters both admit they both hate their jobs, and Stef and Lena comfort them. Callie and Mariana shut their moms out because they wanted to prove that they could be adults but Stef and Lena still want to be moms. They miss the girls so much and want to them to feel like they can still come to them with their issues. They retire to the roof, dip their feet in the pool and sort everything out over wine. Stef advises Callie to disclose her potential conflict to the judge before Ben can, especially since she has the opportunity to build a genuine and supportive friendship with Malika. Lena reminds Mariana that buying things aren’t going to fill her up.

“I know how hard it is to face discrimination and going from being such a superstar in college to being on the bottom rung of the ladder when you get out into the working world, especially being a woman and a minority,” Lena advises “[But] you don’t give up and don’t you get so frustrated that you get discouraged and you stop trying.”

Callie and Mariana encourage Lena to take her own advice and stick with her campaign for State Assembly. Once they hear about her encounter with the troll, they’re even more fervent about it. Maybe Lena Adams-Foster isn’t what the party brokers expected but she’s what the people need and Callie, Mariana and Malika cheer her continued efforts. If a 15-year old Elizabeth Eckford can withstand the wrath of a racist mob to integrate Central High School in Little Rock, Arkansas, who are we to do bow down in the face of some political pressure?

Besides, as Callie adds, echoing Good Trouble‘s first episode, “We’re Adams Fosters and we don’t give up. Our mamas taught us that.”

Thankfully, we’ll get to see more of Callie, Mariana and what their mamas taught them on Good Trouble, as Freeform has renewed the series for a second season.

Natalie has written 142 articles for us.