It takes about 40 minutes for Freeform’s The Fosters spin-off, Good Trouble, to click for me.

It’s Callie’s second day at work as a clerk for a federal judge when a high profile case, the LAPD shooting of Jamal Thompson, falls onto the docket. It’s everything Callie had come to Los Angeles for: an opportunity to persuade her conservative judge of a more progressive vision. She’s forced to compete for the plum assignment — writing dueling bench memos (the legal equivalent of trial cliff notes) with the two Ivy League educated clerks in the office — and is about to put pen to paper when her phone rings.

The tension between the sisters is as thick as its ever been. The night before, they’d tossed insults at each other and seemed ready to start lives in Los Angeles without the other — but Callie picks up the phone anyway. And despite having a memo due at 5PM for the biggest case of her short career, when Callie hears Mariana’s muffled cries, she goes running.

The sisters regroup atop Mariana’s office building and recount the reality of their time in LA thus far, not the shiny version they’ve been telling each other, as if saying it aloud will somehow make it true. Mariana admits that her job is terrible: she’s surrounded by “bro-holes” at an LA tech start-up, who doubt her abilities because she’s one of a handful of women in the space. Her one attempt to assert herself in the workplace — ambushing the company’s CEO in the elevator and asking for a pitch meeting — earned her a swift, forceful and public reprimand from Human Resources. Callie’s job isn’t much better: she was humiliated by her judge on her first day and is unsure whether her fellow clerks are trying to support or sabotage her.

“So both our jobs suck but we can’t quit. We are Adams-Fosters,” Callie proclaims. “We don’t give up. We don’t give in. We fight.” 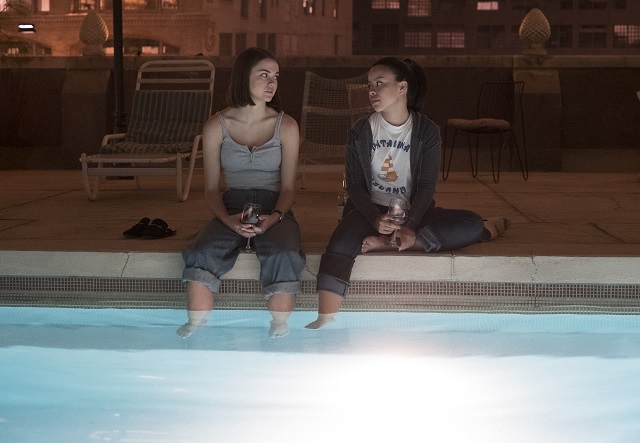 Sisters before misters…or maybe not…

Unknowingly, I spent the first 40 minutes of Good Trouble mourning what we’d lost seven months ago when The Fosters ended. That’s not a reflection of this show — Good Trouble is a very good show — but, instead, an acknowledgement of how deeply connected I felt to watching Stef and Lena for five seasons. Representation is powerful not just because you see yourself but because it allows you space to image new possibilities: as a queer woman, as a partner and as a parent. And Stef and Lena helped me, and a lot of queer women, envision a new future for themselves. I didn’t know how to embrace stepping into the Fosters-verse without Stef and Lena there.

But, the moment Callie leaves her office to go comfort Mariana in a bathroom stall, things just fall into place. Beyond the familiar faces of Maia Mitchell and Cierra Ramirez, I recognize pieces of The Fosters — this thing I cherished — in Good Trouble. I start to see Good Trouble for what it is: an opportunity to build on the legacy of The Fosters. Stef and Lena might not be there all the time — though the mamas do show up in the fifth episode for best and funniest episode thus far — but Mariana and Callie carry so much of the mamas’ spirit with them that Good Trouble feels like a worthy successor. 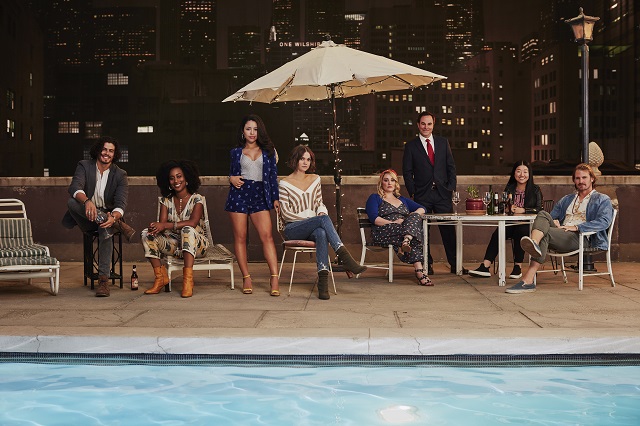 True story: the pool from the Coterie is the same pool that was used on the classic 90’s series, Melrose Place.

Callie and Mariana’s new chosen family comes together at the Coterie, a communal living space in downtown LA where the sisters share a living space, kitchen and a bathroom with the building’s other residents. We’re introduced to Alice, the building’s manager, and then cross paths with Coterie members, Malika, Gael, Dennis and Davia. Good Trouble does a great job in making these characters more than just props for Mariana and Callie to interact with but molds them into interesting characters who you’ll find yourself caring about, independent of the sisters. They’re given a lot of depth in a short amount of time — from Malika’s revelation that she was once a foster kid to Gael’s unwitting revelation that he’s bisexual — and I’m intrigued to see where things go.

Of course, I’m particularly excited about Alice: the semi-closeted lesbian who acts as the house mother at the Coterie. A lesser show might restrict Alice to being the comedic relief, especially since Sherry Cola is so, so good at it, but Good Trouble adds a new layer to her with each episode. While there’s been a steady increase in the number of Asian LGBT characters on television — according to GLAAD, “the percentage of API LGBTQ regular and recurring characters on broadcast has doubled to eight percent from only four percent in the previous year” — Alice represents an opportunity to broaden the types of stories being told. In “DTLA,” we saw an Alice burdened by the expectations of her parents, a common refrain among the children of Asian immigrant parents; I’m looking forward to seeing how Alice grapples with those expectations while building her own life and career at the Coterie.

There is, admittedly, some nervousness about Good Trouble falling into the same trap as The Fosters: endeavoring to tell more stories than the show has time to tell well which led to characters, storylines and the audience being shortchanged. It was clear that the writers had a lot of great stories to tell — many from communities whose stories often go unheard — and that’s laudable; but maybe let’s not try to shoehorn all those stories in at once. Through the show’s first five episodes, Good Trouble avoids that trap, keeping the show’s narrative focused and balanced, even while introducing all these new characters at the Coterie and at Mariana and Callie’s respective workplaces. I’m hopeful that it will stay that way.

Good Trouble isn’t The Fosters. It’s shiny and new and tells its stories in a non-linear fashion that takes a bit of getting used to, but so much of what made The Fosters great — family! diversity! social justice! — is embedded in Good Trouble‘s DNA that it feels just as resonant.
Good Trouble is worth your time, if only so you can understand everything that leads up to the mamas visiting the Coterie and getting stoned in the process in episode five.