There are a lot of beliefs and misconceptions about non-monogamy, and research has found that “regardless of the target’s sexual orientation, individuals who engaged in consensual non-monogamy were viewed more negatively than individuals who engaged in monogamy on all seven dimensions.” So let’s look at some of those common beliefs about non-monogamy vs. monogamy — negative, positive and neutral — and how they hold up with our data.

We debunked this misconception in our first sex survey post about how often queers have sex. The frequency rates among those in monogamous and non-monogamous relationships were nearly identical, in fact. 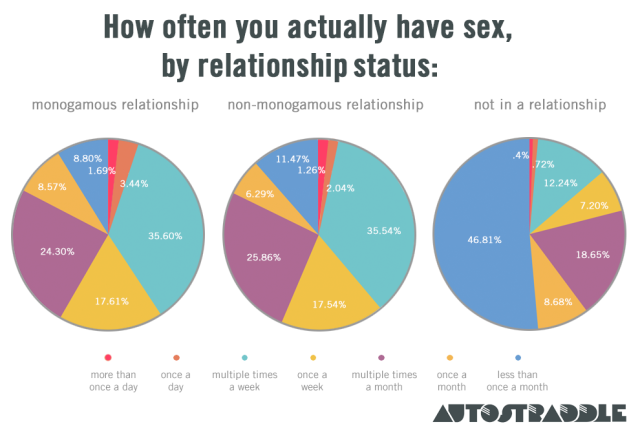 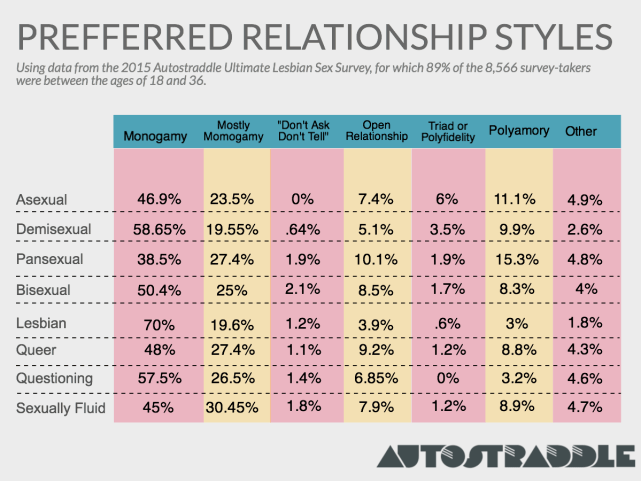 Queer-identified, sexually fluid and pansexual folks are more likely to prefer non-monogamy than the monosexuals. Our survey found 70% of lesbians and 69% of gay folks preferring monogamy, compared to 38.5% of pansexuals, 45% of sexually fluid folks, 48% of queers and 50.4% of bisexuals. A 2014 survey about monogamy taken by 6,000 people showed a similar variation: “bisexuals (65 percent of whom were women) rated monogamy as less of an enhancement and more of a sacrifice than did heterosexual or gay/lesbian people.”

The important thing to take away from this is: 1) There’s nothing negative about being non-monogamous, so it’s not actually a negative stereotype and therefore we need not stress over debunking it, 2) This definitely doesn’t mean non-monosexual folks are incapable of commitment — non-monogamy is a commitment, too, just a different kind.

In a University of Michigan study on stigma around consensual non-monogamy, “one of the strongest findings was that people believed non-monogamous couples to be more sexually risky.” We found this stigma to be outrageously false. In fact, non-monogamous people are far more likely to use protection than the monogamous. 81% of monogamy-preferrers don’t use protection when having sex, compared to 37.4% of those who prefer polyamory and 51.9% of those who prefer open relationships. Dental dams were most popular among the poly (15%) and least popular among the monogamous (3.8%). Those most likely to always use protection were those who prefer polyfidelity and triads. 36.8% of monogamy-preferrers always discuss safer sex with first-time partners, compared to 59% of poly-prefferers.

Furthermore, 25.9% of those who prefer monogamy have never been tested for STIs, compared to 8.75% of polyamorous folks. However — and this is a tough nut to crack, ’cause it’s possible that some of those who’ve never been tested for an STI could have one — only 8.7% of monogamous folks have ever tested positive for an STI, compared to 16.6% of poly folks. When those who have tested positive for STIs were removed from the sample size, the numbers on safer sex practices changed very little or not at all — 81.6% of monogamy-preferrers reported not using protection and 38.6% of poly folks reported not using protection, suggesting that safer sex is employed as a smart precaution, not as a result of a definite STI diagnosis.

As discussed on page one, people in non-monogamous relationships are more likely to be kinky than those in monogamous ones. (Also, many consider polyamory itself to be a kink.) 18% of monogamy preferrers are very or exclusively interested in kink, compared to 60.6% of poly-preferrers. I’ll speculate here that there’s a link between sexual adventurousness and a comfort with “sexual deviancy” in general that applies to both the kinky and the poly, as well as a greater interest in sex overall.

Non-monogamy Is Just What The Kids / Middle Aged Couples Are Doing These Days: SOMEWHAT TRUE

There’s been plenty of trend pieces on this topic, like this one from Rolling Stone, in which we learn that “younger people, twenty somethings, maybe early thirties — are negotiating what their brand of monogamy can be.” That’s one end of the stereotype spectrum. The other is that poly people tend to be middle-aged white, married, opposite-sex couples, but that stereotype doesn’t necessarily extend to how we perceive queer relationships. According to our data, there was some variation by age, but not that much, really.

Well, there you have it! Some additional reading from Autostraddle:

sign up for our newsletter
Related:lesbian sexnon-monogamypolyamoryUltimate Lesbian Sex Survey