Random fact- I never dated until last year, at 22. It sounds weird because I’d been in relationships before, so I checked in with one of my best friends from college and asked her if I ever dated anyone. Sure you did, she said, you married him. Luls.

Dating for the past year has taught me important things about what I need from people I get involved with- my first relationship post-marriage taught me that when things aren’t working, sometimes trying to make it work is a waste of time, especially if you’re not happy. I learned that wanting to give someone their dream relationship doesn’t work if that’s not your idea of a dream relationship as well, and that adjusting your desires to fit what someone else wants is unfair to both people. Further down the line, I learned from someone else that compatibility matters…especially when it comes to being monogamous or not.

I never thought of how I handled relationships in terms of monogamy or nonmonogamy, those specific labels. It didn’t occur to me that there was a term for my preferences, and when it did, I freaked out because I thought, “How can someone want to be with me if I can’t give them what makes them happy?” Everyone I’d been involved with deeply wanted monogamy, and they seemed to be part of an overwhelming majority. I didn’t want to not be able to give that to them, but eventually I reached a point where I had to put my foot down, throw my hands up and say it: I don’t want to be monogamous. Never have. Ever. Ever. Just admitting that was step one, and step two meant that I had to get vocal about it from the jump, so that I wouldn’t end up dating monogamous people and mislead us both about what was possible.

Whoo, that led to some interesting conversations that raised my hackles. I’ve heard some blanket statements and generalizations about nonmonogamy that simply did my head in, so I think it’s about time we educate ourselves, open discussions, and learn from each other. Let’s tackle a few issues in bullet point, shall we? I’ll be using the term poly as a blanket term that encompasses polyamory and nonmonogamy because…well, it has only four letters.

● Poly people just want to sleep with a lot of people. You can switch this up with ‘poly people are greedy,’ ‘poly people just want an excuse to sleep around,’ et cetera – any format where it just gets reduced to sex. People practice many different forms of polyamory and nonmonogamy; sex might be a driving factor in some interactions, but in others, forming a romantic, spiritual or emotional connection is a priority. Generalizations like the above can be inaccurate and hurtful, let’s avoid them.

● Poly people just can’t commit. Oh, this one gets under my skin to no end. Some poly people want commitment, some don’t. Just like human beings in general. But to assume that because one is poly, one is incapable of commitment is…just…wrong. This one usually gets linked to the first one- operating under the premise that it is impossible to commit to a person if you’re busy smanging other people, i.e. commitment always = monogamy. False.

● Isn’t this the same thing as being a cheater? No. Cheating involves deceit and dishonesty, breaking an agreement you’ve made with someone. Being honest about your needs and what kind of relationship structure you can work with is something to be commended. Agreement-breaking happens in nonmonogamous relationships too, and it carries as much weight as it would in a monogamous agreement.

● What’s the point of being with someone if you’re going to continue smanging/dating other people? If you don’t want to be with a poly person, it’s simple. Don’t. I’ve had this argument thrown in my face, I’ve had a close friend get furious that I had the nerve to get married while nonmonogamous, even though my partner was well aware. When your commitment to someone looks different from the monogamous standard, it gets challenged and some people refuse to respect it simply because they don’t understand it or it’s something they could never see themselves doing, so they respond with criticism and contempt. Just…open your mind. Damn. I don’t go around asking monogamous people to justify their relationship choices or prove their validity to me. On the flip side, some people ask questions like this one in a genuine attempt to understand a relationship structure that differs from theirs #fairenough – as long as it’s clear that even if you still don’t get it post-explanation, that doesn’t mean it’s not valid. Also, poly relationships are so different, that you can’t expect one person to explain all the different permutations – it goes on a case by case basis.

● What if you change your mind and turn out to want a monogamous relationship? #blinks. Then I’ll date monogamously. I’m not seeing a problem here. I think relationship orientation can be fluid, just like sexual orientations can be. Whatever makes one happy, really.

● Did…did you just say relationship orientation?? I believe that for some people, being poly is innate and not a choice, in the same way as some people are just wired to be monogamous and couldn’t ever imagine living any other way. For me, I cannot be monogamous, not right now. If that changes in the future, so be it, but it’s not an option for me at present, which is why I identify as nonmonogamous. Sure, I could be in a monogamous relationship…just like I could technically be in a straight relationship -_- (I’m gay, by the way.).

● Polyamory/nonmonogamy is just the newest trend. People started saying this about natural hair, did you know? iCan’t

Feel free to add your own bullet points.

There are also a lot of myths that run in the opposite directions, such as claiming that poly relationships are ‘more evolved’ than monogamous ones, or that involve people treating monogamous people with disdain. Prejudice can run both ways in this case. Personally, I believe everyone should just do what makes them happy, but I do resent the fact that so many people treat being poly like it’s ‘less than’ and/or utter bullshit. I’ve had conversations with people who are vocal in their contempt and dismissal of nonmonogamous dating/relationships because they believe monogamy to be the one true way. I know some people tolerate nonmonogamy but secretly turn up their noses at it. I know monogamous people who respect nonmonogamy and simply say, “Hey, this is not for me but it’s not *less than* what I practice, so power to you.” I’m grateful for the latter.

So now, I turn it over to you. What are some preconceptions you’ve had about monogamy or nonmonogamy? Have you ever encountered someone who is extremely anti- one or the other? What’s your preferred relationship structure and the challenges you face with it? 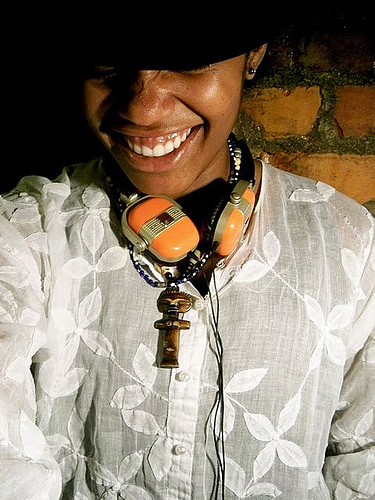 About the author: Born and bred in the south of Nigeria, Akwaeke Z Emezi is an Igbo and Tamil free love advocate, genderqueer Nutri-C addict, and natural hair aficionado. In the space where parathas and palm oil meet, she dances reverence to dope beats and follows the Christ. As a queer bard, blogger and performer, Z infects a message of self-awareness laced thoroughly with love and bravery, believing that only in knowing and accepting oneself utterly can we truly be free. A current Brooklynite, they adore traveling and beautiful people, and are constantly pushing for a life free of fear and full of marvelous.

My preferred pronouns are she/he/they. Mix it up. Surprise me.