Bonjour, pumpkincitas! How’s your Fall going so far? I’ve been celebrating by listening to a lot of Chris Pureka and my nose has been rejoicing in the glory of my new neti pot. As soon as I can taste things again I am making Carolyn’s bean dip, but in the meantime I’ll just watch Episode 4 of Unicorn Plan-it on repeat. Laughing is good for your sinuses! This week in teevee, Brittani and Lizz talked about basically every show ever and was even funnier than the actual television. We’ve got last week’s winners and this week’s televisionary caption contest, 50 pictures of Amber Heard, and Riese’s Glee-cap. Jess interviewed Uh Huh Her’s (UHH if you’re savvy) Camila Grey, Carmen praised Eileen Myles, and Sebastian explained the Standards of Care version 7.0 (hint: it’s way better). We’ve got two playlists for you: one about menstruation and another for lezzing out. Marni and Ashley tackled your HELP needs this week, you can win tickets to see Deanne Smith in Boston, Austostraddle’s coming to NYU, and we’ve got September and October’s calendar girls! And now the group of the week:

A while ago we shined a spotlight on a group for underage Autostraddlers and presented them with the very shiny and prestigious Group of the Week award. It’s only fair that I mention this group for those of you over 30. You aren’t alone! I promise there are at least 17 of you.

On Banned Books Week: The Conspiracy to Shield Queer Books From Your Eyes:

The I Think Patti Smith Solved This Problem For You Award to sc: “I want to celebrate Band Books Week, but I can’t find any books about bands “

On Did You Hear That Thing About Arrested Development Coming Back?:

The Remember When Tegan and Sara Joked About AD And Your Head Exploded? Award to Lex: “And that’s why you don’t teach lessons, Fox.”

The Good Luck With The IRB Award to katiebug: ““Can drinking tequila cause an orgasm?”
Someone should do this as their thesis.”

On Marcel the Shell Has Shoes On, Also New Children’s Book:

The I Need To See That Award to Slevs: “Marcel the shell Halloween costume. This is happening.”

On Controversial New Study on Gay Conversion Therapy Claims It May Actually Work:

The And Then Press Command+Z Award to lia: “press S+T+R and 8.
works as good as Anti-Gay Therapy.”

The Start Your Engines, Speedracers Award to SaylaMarz: “It’s been a while since I got laid.
Quick – somebody hop on my face before the bigots start thinking I’m ex-gay!”

On You Have A Lot of Feelings: The Wonderful World of D&Ms: 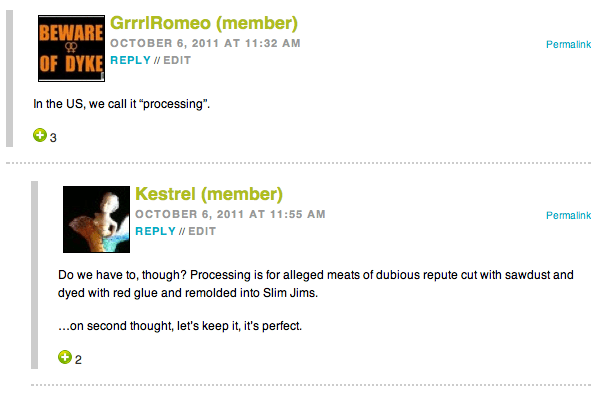 On Glee Episode 303 Recap: You’re Knockin’ Off That Piece:

The Glee Could Use a Whirling Dervish Award to Lora: “PETITION FOR QUINN TO JOIN THE TENNIS TEAM AND THEN GET VERTIGO SO SHE SPINS AROUND A LOT ALSO. It’s happening.”