In the fourth grade, my elementary school become one of the numerous schools around the United States that removed the Harry Potter books from the school’s library. It started when my teacher began reading the first book to the class, and one girl complained that her parents didn’t want her to read it, so the teacher had to put it aside. Fair enough… except that her parents didn’t stop there. Instead they rounded up a group of like-minded parents and complained that the books were so abhorrent they needed to be removed from the school library so that no kid could read it. Even though most parents did not share their opinion, they were loud enough that the school caved, and while the book remained in the library for some reason, we were not allowed to check it out. It seemed so strange to me — that somebody else’s parents, people whose values my parents did not share in the slightest (in fact, my parents found their values completely abhorrent), got to make the choice about what I could and could not read.

Of course, it didn’t matter to most of the kids at my school, whose parents bought them the books anyway. They knew better than to think a book about a fictional wizarding school would lead to kiddie covens, and actually appreciated the way they got previously-disinterested kids reading. But for kids in a household with no books, or no extra money to spend on them, the absence of a book from the library or curriculum means that they might never get to experience that book at all. And that’s unfortunate enough when it’s just a matter of kids being denied the exhilarating experience of reading great works of literature. (The American Library Association’s list of the most frequently-challenged books of the past decade includes almost all of the books that I adored as a teenager.) But when it’s a kid who needs answers about his/her sexuality, or to know that they’re not alone, a school library is an essential resource.

Unfortunately, some of the most challenged books of the past few years have been about LGBT issues. Two of the books on the ALA’s top 10 most-challenged list for 2010, And Tango Makes Three (an adorable picture book about gay penguins) and Revolutionary Voices: A Multicultural Queer Youth Anthology, had “homosexuality” cited as a reason for the parents’ objections. The Advocate has their own list of frequently-challenged gay books for Banned Books Week, including Tango along with two other picture books — King and King and the iconic Heather Has Two Mommies, the first lesbian-themed children’s book — among others. The books of YA  author Francesca Lia Block, who frequently addresses gay and trans* themes, have also been challenged in Florida and Arkansas. 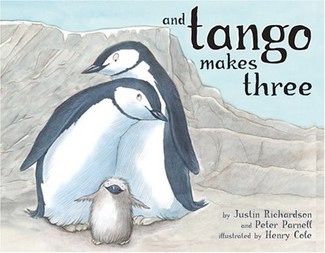 In a way, anyone who is familiar with the history of book-banning would not be surprised that parents are up in arms about books that are pro-gay. A quick glance at any of these lists would show you that even 100% heterosexual sex scenes in books can get them challenged, especially if they’re aimed at teenagers, and even if they’re far from titillating. In fact, pretty much every “controversial” topic — from drugs to divorce, religion to politics — is reflected on the list of books that have been challenged in schools. (For example, lest you think that book-banning only comes from those on the right, books like The Adventures of Huckleberry Finn and To Kill a Mockingbird are frequently challenged due to their use of racist language.) Indeed, one argument against censors is that if all of them had their way, there would be hardly anything left — or at least, hardly anything interesting.

The sad side of it is that for every parent who insists that books about drugs, violence or sex are inappropriate for schools, there are many more kids who need those books because those “hot-button issues” are more than issues to them — they’re daily realities. And for LGBT kids awash in a sea of hate at home, in church, at school and even online, libraries are often the one place where they can discover themselves judgment-free. No one but the librarian behind the desk has to know what you’re checking out — and that’s assuming you decide to check it out, anyway. In the fight against anti-gay harassment in schools, we can’t just focus on the bullies in the halls and the cafeteria — but also the adult bullies who want to deny LGBT kids the information that might save their lives. 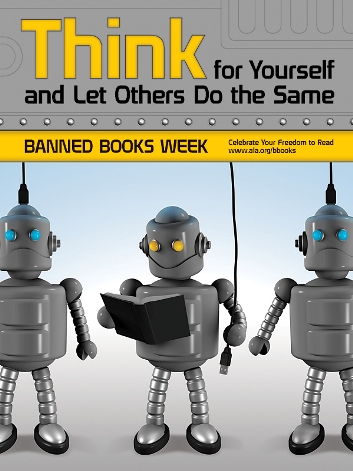 At the end of the day, it shouldn’t matter why a book is being banned or what benefit (or lack thereof) might come from reading it. I despise the Twilight books, I think they send a terrible message to young girls, and I’m still dismayed to see that people are trying to get them removed from schools. I still think students should have the right to decide for themselves whether those books — or any books — are worth reading. In my opinion, if you can’t handle different points of view, it shows that you aren’t that secure in your own beliefs – if you were, you’d think they could withstand criticism. It also shows a real lack of respect for — or misunderstanding of — freedom of speech and the press. To quote Noam Chomsky:

Chomsky isn’t the only author who has spoken out against censorship. Judy Blume has been an anti-censorship activist ever since her books were first challenged in the 1970s, and she has a great deal of information on her website, including how you can respond to censorship in your community. She also compiled an anthology of works by censored children’s and YA authors, called Places I Never Meant to Be; proceeds from the book help the National Coalition Against Censorship. (If you can’t get the book, at least check out her great introduction to it online.) Also, John Green of the popular YouTube show Vlogbrothers recorded this video when his book, Looking for Alaska, was challenged in a high school in New York State:

But perhaps my favorite quote on the subject is courtesy of my favorite author, Kurt Vonnegut, another common target of censors. He had this to say about them:

Here is how I propose to end book-banning in this country once and for all: Every candidate for school committee should be hooked up to a lie detector and asked this question: “Have you read a book from start to finish since high school?” or “Did you even read a book from start to finish in high school?” If the truthful answer is “No,” then the candidate should be told politely that he cannot get on the school committee and blow off his big bazoo about how books make children crazy.

If you’re looking for ways to take the fight for freedom to read into your own hands, the National Coalition Against Censorship has a list of things you can do to fight censorship. Of course, the place to start is by reading the banned books yourself. In addition to the aforementioned lists, check out the ALA’s Banned and/or Challenged Books from the Radcliffe Publishing Course Top 100 Novels of the 20th Century (which also details international challenges and bans) as well as the full map of challenges in the U.S. from the Banned Books Week website. You can upload a video of yourself reading your favorite banned book for this week’s Virtual Read-Out, and have it featured on the Banned Books Week YouTube channel.

What have you done to celebrate Banned Books Week? What does it mean to you?