There are basically several ways authors can address gayness in fantasy novels. They are as follows:

2. Someone goes through a classic coming out story arc. In the case of fantasy novels, probably they get magic powers in there somewhere. Glitter and fairies, etc.

3. Someone says, “So I like this lady now.” All her friends shrug, and then maybe yell at her for making out with her girlfriend during the zombie apocalypse.

Guess which one happens most frequently.

The following is a list of fantasy novels* that fall somewhere between tangentially gay and really, really gay. They all fall under “read this immediately.” 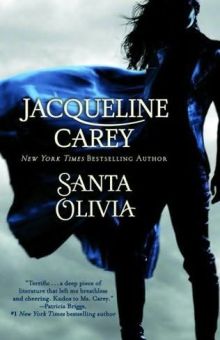 Santa Olivia is basically a combination of werewolves and comic book heroes and adorable young gay girl love and vandalism and genetic engineering and government conspiracies and unlikely outcomes and boxing. Also the writing is superb, and if you usually shy away from YA because you don’t like the tone or whatever, you still have no excuse for not reading this book. It is number one on this list for a reason.

Carey is also the author of the Kushiel’s Legacy series, which is definitely not YA, and which is extraordinarily well-written epic fantasy that takes place in an alternate Europe. While the main character’s love interest for most of the series (so far) is a dude, her antagonist / lover / the person who is actually equal to her is a woman. Oh yes: this book also has female characters as both pro- and antagonist. How do you feel about that, Bechdel test.

Ash and Huntress, by Malinda Lo 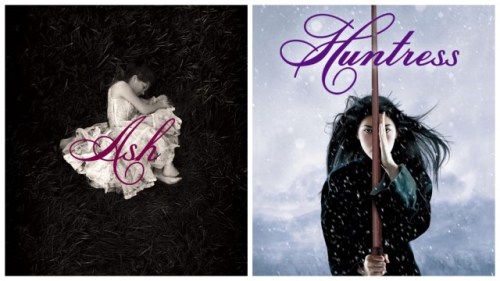 I’ve written about Malinda Lo before and guess what, she’s still awesome. Here’s why: gay retellings of classic fairy tales that incorporate non-exoticized Asian cultural elements. For instance, here’s what Ash is about:

“In the wake of her father’s death, Ash is left at the mercy of her cruel stepmother. Consumed with grief, her only joy comes by the light of the dying hearth fire, re-reading the fairy tales her mother once told her. In her dreams, someday the fairies will steal her away, as they are said to do. When she meets the dark and dangerous fairy Sidhean, she believes that her wish may be granted.

The day that Ash meets Kaisa, the King’s Huntress, her heart begins to change. Instead of chasing fairies, Ash learns to hunt with Kaisa. Though their friendship is as delicate as a new bloom, it reawakens Ash’s capacity for love—and her desire to live. But Sidhean has already claimed Ash for his own, and she must make a choice between fairy tale dreams and true love.” 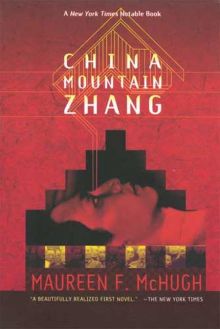 In the world of China Mountain Zhang, the United States has had a communist revolution following an economic crisis and China rules the world. You could describe it as being on the “scifi” end of “scifi/fantasy.” It also won the Lambda, the Hugo, the Tiptree, and the Locus awards, and was nominated for several other things that it probably should have won as well. Goodreads says:

“We enter a postrevolution America, moving from the hyperurbanized eastern seaboard to the Arctic bleakness of Baffin Island; from the new Imperial City to an agricultural commune on Mars. The overlapping lives of cyberkite fliers, lonely colonists, illicit neural-pressball players, and organic engineers blend into a powerful, taut story of a young man’s journey of discovery. This is a macroscopic world of microscopic intensity, one of the most brilliant visions of modern SF.” 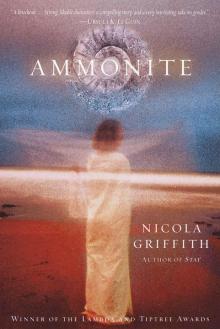 This book is a planet of all women and they are somehow able to reproduce without men (sort of in the vein of Charlotte Perkins Gilman’s Herland but without the random essentialization of gender traits and pre-first wave feminism utopian setting). Also, it’s really good, and it won a Lambda Award. From Amazon:

“In Ammonite, the 1994 James Tiptree Jr. Award winner, the attempts to colonize the planet Jeep have uncovered a selective virus that kills all men and all but a few women. The remaining women undergo changes that enable them to communicate with one another and the planet itself, and give to birth to healthy, genetically diverse children. Marguerite Angelica Taishan is an anthropologist who realizes this phenomena and makes the decision to give herself up to the planet to uncover its mysteries.”

The Will of the Empress, by Tamora Pierce 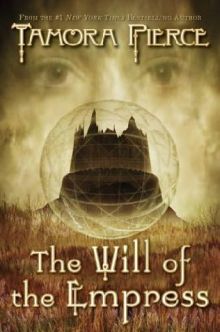 Most of Tamora Pierce’s books are gender-bending rather than gay, and Pierce has basically created a sub-genre of girls dressing up as boys to join the military and/or go on adventures and/or generally kick ass (see also: Eon, by Alison Goodman; Graceling, by Kristin Cashore; Monstrous Regiment, by Terry Pratchett, which parodies books like Eon and Graceling; the Leviathan series by Scott Westerfeld, etc). But there is a gay character in The Will of the Empress, and it’s absolutely not a big deal. She just ends up with this woman, and all of her friends are like, “why didn’t you tell us you liked girls,” and she’s all, “I didn’t really know,” and then they say “ok,” and that’s that. In other words: this is the future of gay in YA, the rest of the world just needs to catch up. 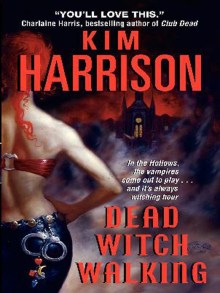 Harrison’s series, of which Dead Witch Walking is the first book, is just generally fantastic. And the main character’s roommate is a lady vampire who’s in love with her (the vampire, like all the best not Twilight-y vampires, is bisexual). From Amazon:

“Rachel Morgan, witch and bounty hunter with the Inderland Runner Services, is one of the best at apprehending supernatural lawbreakers throughout Cincinnati, but when it comes to following the rules, she falls desperately short. Determined to buck the system, she quits and takes off on the run with an I.S. contract on her head and is reluctantly forced to team up with Ivy, Inderland’s best runner … and a living vampire. But this witch is way out of her league, and to clear her name, Rachel must evade shape-changing assassins, outwit a powerful businessman/crime lord, and survive a vicious underground fight-to-the-death … not to mention her own roommate.” 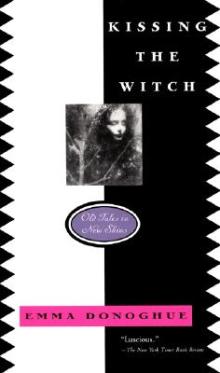 A Companion to Wolves, by Elizabeth Bear 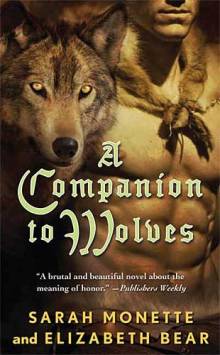 This book does really interesting things with gender and masculinity of a gay-dude kind. It is also one of the books on this list that is definitively not YA, for those of you keeping track at home. From Publisher’s Weekly:

“The inhabitants of a cold and perilous world grounded in Norse/Germanic mythology depend upon the brutally violent wolfcarls, men who bond telepathically with huge fighting trellwolves, to protect them from monstrous trolls and wyverns from further north. When the northern threat suddenly intensifies, Isolfr, a young wolfcarl, and his wolf-sister, Viradechtis, a Queen wolf destined to rule her own pack, are thrust into key roles in their civilization’s desperate fight to survive. The meticulously crafted setting and powerful, often moving rendition of characters and relationships — human and nonhuman alike — result in a brutal and beautiful novel about the meaning of honor. Never blushing as they consider the ultimate sociological, sexual and moral underpinnings of a what-if often treated as coy wish-fulfillment fantasy, the authors have boldly created a fascinating world that begs further exploration.” 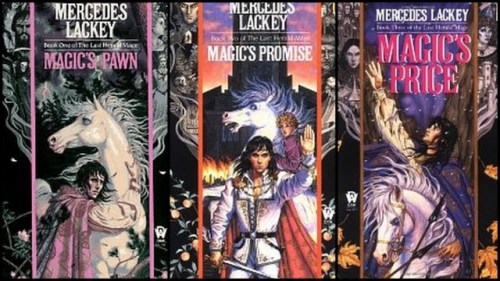 There’s an old series called Magic’s Pawn, Magic’s Promise, and Magic’s Price by Mercedes Lackey (her books in general are pretty gay-friendly, and there’s a gay lady couple in one of her other early series, set in the same world. Those books are Arrows of the Queen, Arrow’s Flight, and Arrow’s Fall, but those characters are in supporting roles) that has a gay male main character. He’s a great character and all three books deal with his horrible relationship with his father, as his father had suspected he was gay, hidden its very existence from him, and then disowned him (meanwhile, he’s one of the most powerful mages EVER and works for the king/government). From Amazon:

“Vanyel’s disdain for swordsmanship earns him an unexpected exile — at the High Court of Valdemar under the guardianship of his stern and implacable Aunt Savil, one of the legendary Herald-Mages. A young man’s painful discovery of his own immense talents and his true nature form the core of this richly detailed fantasy, the first in a new series set in the same world as “The Heroes of Valdemar.” Lackey’s talent for characterization lends depth to this coming-of-age adventure that will appeal to most fantasy readers.”

Anything Ever by Tanya Huff (and specifically the Keeper series) 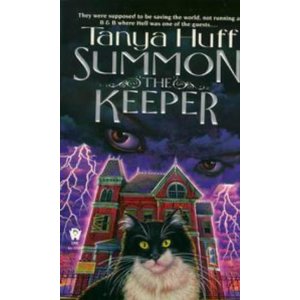 Tanya Huff is a gay Canadian author and I could love her just for that. But that would be a waste, because there are so many other reasons to love her! For instance: lots and lots of kick-ass ladies. Yes, Tanya Huff is a tiny bit fluffy, but she’s really delightful. The first two books of the series focus on Claire, but in Long, Hot Summoning (Seriously! That’s the title!) the focus shifts to her younger and more powerful gay sister, Diana. From Amazon.com:

“Being one of the Earth’s protectors is never easy, but when Claire the Keeper and Austin the cat find themselves in charge of the Elysian Fields Guesthouse Bed and Breakfast, all Hell breaks loose in the form of a gateway residing in the basement.”

*This was originally going to be a list of gay YA fantasy novels, but guess what, there aren’t that many of them.

**Extra special thanks to Jenna for book recommendations.

***Did I miss your favourite gay fantasy novel? Probably! Discuss.